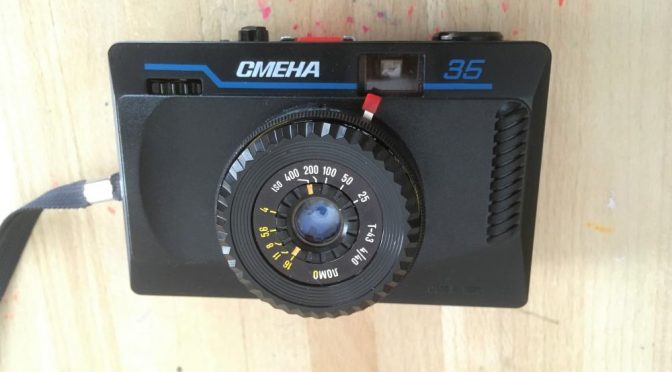 Remember the Smena 8M ? A Soviet Camera that combined a killer lens, 50’s shutter and cheap plastic body ? Well the folks at LOMO didn’t stop with the Smena 8M, refining it further finally producing a last gasp bad boy – the Smena 35 (Смена-35). But whilst there is a lot of improvements there are issues to be aware of.

Launched in 1990  the year after the Berlin Wall fell, this was the last roll of the production dice for the classic series of Smena cameras. The classic Smenas sold more than any other camera ever made. The Smena 35 only added just over 800K of those 30 Million+ sales but is important in the gradual evolution of a design that began almost 4 decades earlier.

I loved the 8M  combining a killer lens on  a cheap body aimed for the masses. It might be cheap but it was killer sharp in good conditions. Our 35 just takes that  core mechanics but wraps them up in a bad boy black plastic body which looks much more modern and solid.

A Smena, Shaken not Stirred

Underneath  little has changed. So we have  our T-43 40mm 1:4 Glass Triplet lens (check), Plastic body (check) and a shutter that needs to be cocked (check). As with the 8M you’ll need to set the aperture and shutter manually.  You can either do this by setting the aperture to match your film speed and then using a set of weather pictograms on the lens barrel to pick a shutter speed. But like the 8M there’s nothing to stop you setting your own aperture and shutter combos. The shutter speeds (1/15-1/250 +B) are found on the underside of the lens barrel of both cameras.

Bodywise as well as the black plastic shell there are a few  other changes.  The whole camera feels more compact and robust. The cocking lever has been moved to sit on the top of the lens barrel rather than at the side. This gives 2 obvious advantages. You can see if the lever is cocked or not in the viewfinder and you’re less likely to catch it with your fingers.

The camera also uses ISO/ASA settings rather than GOST found on most 8Ms.  The camera also has a standard film loading set up compared to the 8M. The PC sync flash link is gone replaced by standard hotshoe. But there are some losses.

And these may be a deal breaker for some of you. The camera isn’t filter treaded and there’s no cable release mount. This kinda makes the B setting and tripod mount of limited use here. Push on filters may e an option but the lens rim is sloped.

Although you’ll most commonly pick up a black version, LOMO released it in white, red, blue, yellow and titanium grey (worth paying a visit to sovietcams.com page on this camera for all the subtypes known)

However the camera is used pretty much in the same way as the 8M.  Scale focus is the order of the day (although helpful zone pictograms  are on the focus ring. You’ll need to manually set the exposure as outlined above. Then simply cock the shutter and take a shot.

As with the 8M the only thing locking the shutter is the cocking mechanism so you can easily take double exposures (intentionally or not). The thumbwheel winder locks until the shutter is fired once

Worth noting the rewind system has changed.  The Smena 35 requires you to depress the shutter button and turn anticlockwise a quarter turn so the arrow on top points to R first (trust me not obvious – luckily kataan.org have copy of the manual). This is actually quite a neat step once you realise.  Note the manual warns you to NEVER rewind in B (dunno what happens but I wasn’t gonna shaft my camera)

There’s a bit of barrel distortion to contend with as well but not bad.

So all in this should be an easier to shoot version the 8M unless you like dabbling with filters ? Yes but…

When the 35 is on the money it does take good shots but there are a lot of more smeary shots here and there looks like a slight blade leak too at certain speeds. To be fair the 35 started in a worse situation – shooting in late Scottish winter meaning the aperture was either wide or speeds slow. My 8M review is based on much more sunny days.

I prefer my 8M is better overall. So get a 8M and ignore the 35 ? Hang on –  plenty of folk have found issues with their 8M and others have found the 35 to be excellent.  Looks like LOMO had some issues about build consistency IMHO. There’s also the issue of using cameras made 2-4 decades ago. Both are great cameras when they work. I’ve also noticed consistency issues on the 3 Smena symbols I’ve owned as well.

For me the Smena 8M is arguably the one to plump for. It looks soviet era and has more flexibility.  Our 35 is just too much like other basic cameras from the era abet with 1950’s cocking shutter. Slammed the name Hanimex or Halina on the side and you wouldn’t be surprised. The 8M is usually slightly cheaper to buy given it sold in the millions but that said at the time of typing some 35’s had sold for well under a tenner (I’d usually factor more-mint boxed ones from the FSU are of then found for £25 inc postage)

The other alternative  to both is the Smena symbol (aka cosmic symbol), which is basically a deluxe 8M with a winder which autococks the shutter. And of course you can go even more retro with the whole Smena series. Of course there’s a range of other FSU cameras worth considering like the  BelOMO Vilia (if you can live with the viewfinder)