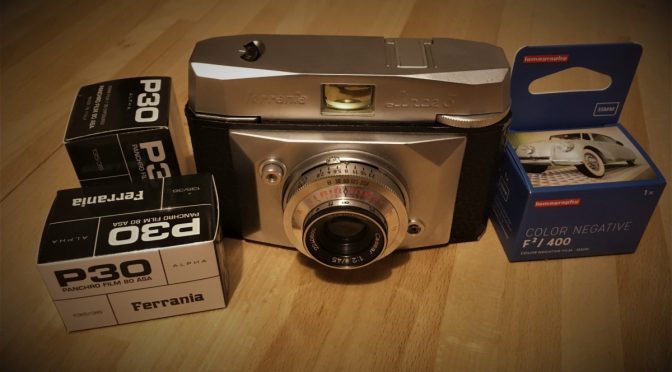 2017 has become one hell of a good year for film.  With various artisan launches and the imminent return of Ektachrome., much of the buzz has focused on not just one but 2 films  hailing from Ferrania’s plant. What better way to test them out than shooting on a Vintage Ferrania Camera !!

A Bit of History

Ferrania’s history begins quite literally in explosive fashion. In WW I,  an explosive manufacturing company called SIPE chose the Ferrania hamlet of the municipality of Cairo Montenotte for a new factory.  Given that early film and explosives shared similar chemicals in 1917 SIPE went into partnership with the Pathé Brothers (yup that Pathé).

That morphed into Ferrania in 1923, who became a major maker of both still and movie film. In fact Ferrania film is behind many a classic Italian movie of the post WWII era. 3M bought it in the 60’s and changed hands a few times  before closing its doors in 2012.

Rising from the Ashes & P30 Alpha

But our story doesn’t end there.
In 2013 a new starter company rose from the ashes. FILM Ferrania has taken some of the orginal Ferrania’s key personnel and thanks to a very successful Kickstarter campaign set up shop on one of the building of the old site. The road to production has been tortuous and they’ve not yet delivered on their promised Scotch Chrome based slide film. However en route they given us a wee monochrome taster of future promise. 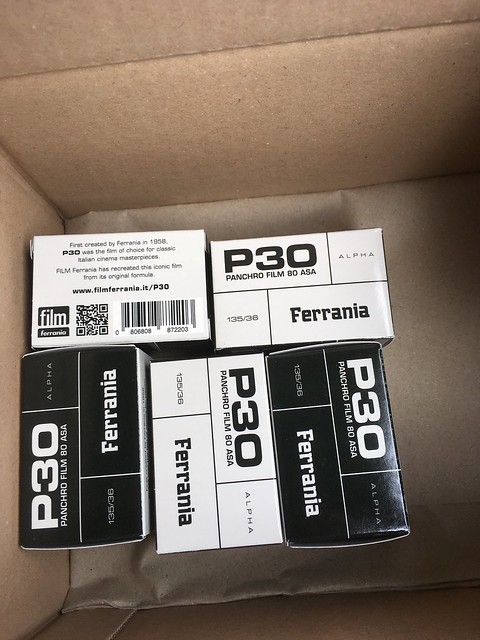 That film is P30, a panchromatic B&W film based on the emulsion of the legendary P30 B&W motion picture film they produced a half century ago. My sense is they developed it as a tester for their set up on the way to produce colour film.  Luckily for us, they’ve released it. Note this is a film still under development and will improve like a good wine before final release . However Film Ferrania have nimbly got the public to pay to test it for them. 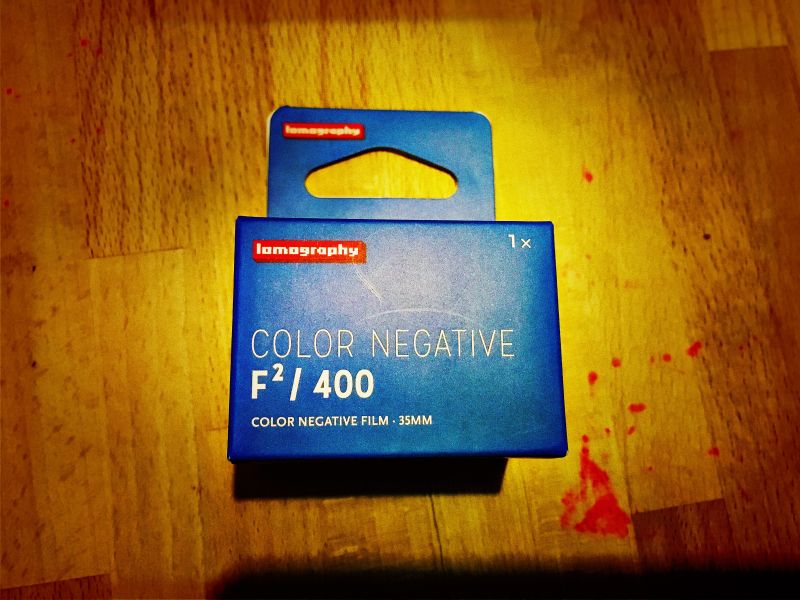 If that worries you, another film was lauched this year using more tried and tested Ferrania film stock. Those Cheeky hipster targeting folk at Lomography launched F2/400. Beneath the advertising hype about castle wine cellars, is the fact that they bought up some of the last production of Ferrania Solaris FG+ 400, and have now decided to market it (I suspect in a clever viral marketing approach by not naming Ferrania but dropping enough hints so folk started googling stuff).

What better way to test these out was to use a Ferrania camera. Ferrania like many a rival,  sold branded cameras. The 35mm models made can be a bit tricky to track down bar the fantastic looking (and expensive) Condor rangefinders and the 60’s Lince series which I ended up using. If this simple unmetered viewfinder looks familar, that’s because the Lince cameras were based on the  Dacora Dignette. The Dignette was also used as  the better known Ilford Sportsman.

My Lince 3 is a later model than the Sportsman model I tested. There are some refinements notably the faster ‘ceasar’ 45mm 1:2.8 lens and a better shutter.  Although the original Lince was stylistically near identical to the Sportsman/Dacora, the later Lince 2 and 3 have a different top plate/winder resembling the later Dignette 1 but with a depressable cold shoe for flash.

Thoughts on the camera

Not surprisingly the Lince shares much of the + & – of the sportsman. They share the same frontplate shutter button that you push into the camera to shoot. Both have  focus, shutter and aperture control rings around the lens.

You set the aperture by sliding a small protrusion. However just like the sportsman, this doesn’t mark the aperture size.. A small arrow to the left marks the value which if you forget means you will be 1 stop smaller.  The focusing and shutter rings are luckily more sensible. Interestingly only feet for distance is used. A notable improvement is  the Varo (vario) leaf shutter is with 4 stepped shutter speeds from 1/30-1/250 as well as a bulb setting. The viewfinder I found better than the Mk2 Sportsman with clearer etched markers.

Optically this is okay, not bad for a German Camera that really dates from the late 50’s. The lens is reasonable even to edges. There is a minor amount of pincushion distortion but you really need to look. It isn’t as sharp or contrasty as the Voigtlander Vito B or the Kodak Retinette 1B I own. This wasn’t so much an issue with a 99p Sportsman but you’ll pay £20 or more for a Lince. And that my friends is the biggest issue for the Lince – you are paying for rarity, name and subtle styling over near identical Ilford/dacora models.

Back to the future – shooing P30

I shot a roll of P30 on this and an Olympus XA. This film has quite impressed me. Rated 80 ISO and  is marked as Panchromatic but like others I have found it to make reds much darker (see my posted colour test shots of this).

Contrast seemed reasonable but the Lince probably hinder it a tad and it was more contrasty on the XA.  It has pretty fine grain

My XA roll had some linear marks on some frames, an issue described by others (but not my Lince roll). This will hopefully not be an issue on the Beta release on. I got AG Photolab to process.

I’d also take a read of Photo-Analogue post on P30 for a very interesting and different take on the film.

I’ve shot Solaris FG+ 400 before but that stuff was really expired. This was pretty fresh stuff and much better for it. With the Lince I shot it at 200 ISO rather than 400. It is quite a pleasant film with nice punchy colours even in lower light.

It doesn’t quite give the Xpro feel  that the company blurb says (FG+ 200 is what you want for that). By the time you read this F2/400 has sadly sold out.

FG+ 200 however is much more available (the film of a thousand rebrands) and can be found in various guises including Truprint FG+ 200. With that welcome to knock out blown colours.