Okay I suspect the dog and his dinner has blogged about this camera but it feels like a right of passage for a camera blog and what the heck I love it.

This little design classic arrived in the Mid 60’s and set the standard for Point & Shoot (P&S) camera right into the 80s. The classic styling is married to an excellent sharp  Zuiko lens and a simple but effective metering system. That meter is driven by the selenium array (the glass bubbly bit) around the lens. This means no batteries ever required.

Usage is simplicity itself. In the most part you’ll set the camera to  A (automatic) on the aperture ring and then select one of the 4 focus zones (0.8, 1.5 , 3m and infinity) and shoot.

You can even see and adjust these focus zones from the view finder by means of a small window nicknamed a “judas” window.

The exposure system is simple but accurate. The camera has just 2 shutter speeds. Above 13EV it shoots at 1/200 sec and below 1/40sec. This sensibly means a smaller aperture is always used except in really low light.

This a EV17 camera (1/200 and f/22) allowing you to shoot 400asa film in even bright sunlight. If light level falls below EV8 then a red flag pops up in the viewfinder locking the shutter.

The aperture setting are designed for flash but you can sneakily use to allow you to shoot below EV8 by turning the setting to f/2.8.  The camera  will shoot at 1/40 and as most film tolerates a bit of underexposing you might get away with it.

The flash aperture setting aren’t a full manual mode. Be aware that you can only set the maximum aperture, the light sensor system still kicks in and won’t allow you to over expose. 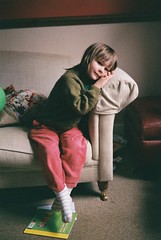 It is threaded for cable release and has both modern hotshoe & PC sync flash connectors.

In use it is simply superb and probably the sharpest most accurate P&S I have. Want Lomo dreamy blurry slightly off colour shots ?  look elsewhere, this is all about crisp, well exposed shots that rival dSLRs.  Don’t believe me  ? Have a look at Ken Rockwell’s views on it.

I love shooting with it . It is intuitive and gives good results

You can find them pretty widely due to the numbers made and they are fairly robust. They tend rightly to command a little more  (ebay you can find a good example for £10-20) than some rivals but they’re worth it and they cost a lot less than a second-hand lomo LC-A. Make sure metering working (blades open more or less depending on light condition, red flagging with lens cap on etc). Aperture blades can become sticky overtime (repairable but takes time or money). Don’t panic about the light seals as will probably be knackered unless someone has replaced, they are easy to replace with a kit for a few quid. The selenium metering in theory can fail if exposed to heat and light so a lens cap is a good idea but you can pick up a clip on for about a quid or branded push on for less than a tenner . The all black version and earlier ones with metal shutter buttons command a premium

Classic it may be but there are some minor issues. There is no real manual mode and no B setting. The shutter speed options seem rudimentary compared to cameras a few years later but they do deliver.  Perhaps the biggest issue is the relatively rare 43.5mm thread for filters.  However you can find on eBay and trip man has a good range at a reasonable price. The nice thing is the camera’s metering will automatically compensate for most filters you use.

16 thoughts on “Yet another Olympus Trip 35 Review”