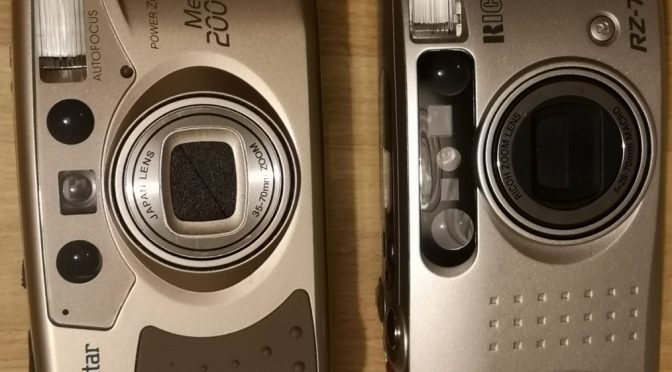 As the Poundland Challenge 2019 has proved again you can actually buy a lot for a quid. So why don’t we take 2 AF compacts for a walk that cost around a quid and see what you get for your buck.

The Vivitar is a genuine £1 camera (plus postage) from eBay. The Ricoh ended up a tussle and came in at £1.04 before postage (ironically being the cheaper of the two once you add that on).

I’ve struggled to find anything about the Vivitar’s spec but at least we can find the Ricoh’s from camera-wiki.org.

The spec isn’t that high for a 90’s zoom with a much simple lens construction & spec than either my favourite Pentax Espio AF Zoom or the Yashica Microtec 70. Notable is the poor DX range although today getting much other than 100, 200 or 400 ISO is quite hard.

The Vivitar is a multi-element constructed 35-70mm lens but whether it’s as low as 4 elements or as high as 8 I can’t say. The Japan lens logo doesn’t inspire confidence. However the camera has 4 sets of DX pin contacts suggesting it can encode for a wide range of ISO. It also seems to have a more advanced exposure system from the options. It uses the larger CR123A battery.

No idea why it’s called Mega and the 200 has no link to features. It reminded me in someways of the Samsung AF 105 XL in some ways in feel although the Samsung has a somewhat more radical design.

Neither of these plastic shelled compacts are ugly by any means. The Vivitar goes down the brushed metal look. It’s the bigger of the two but feels more robust. It can be wielded one handed in full auto mode easily enough.

The top plate has a large LCD with separate controls for red eye, timer and shooting mode. The shooting mode cycles between auto, flash off, flash forced on, slow sync, landscape, +1.5EV backlight & nightshot mode. The Zoom Toggle sits in natural postition for your thumb

The Ricoh is smaller and feels more modern with a shinier metallic finish. It is more compact but feels just little more flimsy. Like the vivitar it can be hot in auto one handed and has a similar layout for shutter & zoom toggle. The LCD is smaller but uses clearer icons to show mode. On the front of the camera is a macro button. Overall you have the choice of auto, red eye, timer, flash off, flash forced on, landscape, slow sync and macro modes . It importantly has no backlight compensation.

Viewfinder -wise the vivitar feels bigger and brighter but lacks the parallax & frame lines of the Ricoh. Both move with the frame. The Vivitar has both a focus lock and flash ready LED by the viewfinder. The Ricoh makes do with just 1 LED.

The Vivitar is faster to boot, shoot and zoom. The Ricoh is also one of those cameras which irritatingly charges the flash before allowing you to shoot in auto even on a sunny beach. But it is just slightly quieter than the Vivitar in winding.

I prefer the rubberised handgrip on the front of the vivitar to the ridge on the rear of the Ricoh. I suspect the Ricoh was made when LCD started getting stuck in the back of digital compacts. And if it was a digital compact holding it like that would make sense. But it’s a film camera not a digital.

The flash tends to kick in just that bit earlier on the Ricoh as the light fades IMHO in 400 ISO. However as we’ll see that might make sense. The Ricoh also has that frustrating macro button to use.

Neither camera is disastrous but neither is gonna replace my Pentax Espio AF Zoom any times soon.

Both are not the sharpest compact I’ve used. However the Ricoh is just that bit sharper and requires less post work. It’s telling as some of the parallel shot were taken with Ricoh using 100 ISO v 400 ISO on the vivitar especially on the Tele end.

The difference is minimal on wide and at times I think the Vivitar wins out but that may be due to the extra wide you get on the Ricoh. However the softness is worse when you drop a speed or 2 with the Vivitar and it’s results at wide are worse than the Ricoh.

Both cameras have some pincusion distortion when wide. On the tele end the radial distortion is less. The Vivitar as a little pincushion whilst the Ricoh has a smidge of barrel distortion.

Neither is a great AF Zoom compact. They both take okay pictures but the Ricoh overall edges it with image quality and the wider end. A shame as the Vivtar is not that bad with options and easier to hold.

The problem isn’t which one is better really. It’s the fact you can get a whole better camera for the money.

The once market dominant AF zooms have become overlooked with their once cheaper prime lens siblings now being the sought after cameras. This means there’s loads to pick from. But not all are equal. The Pentax Espio AF Zoom is one of many fine examples of the Espio series (there’s also some stinkers). Canon Sure Shot zooms are also worth a look especially the high end Sure Shot Classic 120 (aka Prima Super 120/Autoboy 120) and the Older Sure Shot 60. Equally several Olympus mju/infinity stylus zooms are worthy.

There isn’t much on either camera on line. Infact there’s really nothing on the Vivitar. The Ricoh fares better with Sylvain Halgand casting an eye over it and there’s a brief review on Point & Shot Film Cameras.