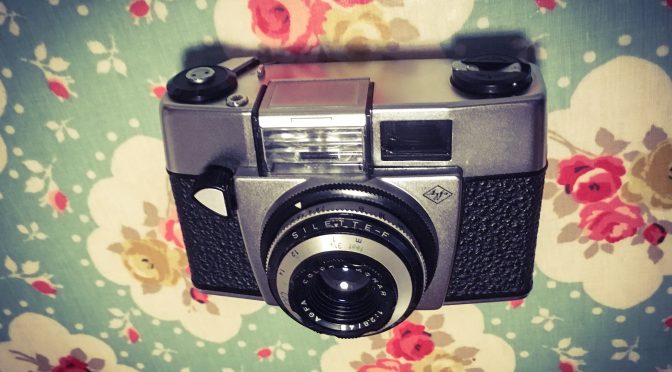 From the more basic end of Agfa’s long running Silette series of 35mm compacts, the F is notable for its now redundant flash bulb system. But step beyond that to see if this is any good or just a flash in the pan ?

Agfa started the Silette series in 1953 and the range ran til ’74.  The cameras included both viewfinder and rangefinder models some featuring either coupled or uncoupled light metering. The 1963 F was one of several 60’s models developed from the Silette I. These lose the stepped top plate of the 50’s cameras and have plastic and pressed metal bodies but still ooze build quality. Watch out though there is a rapid film format version of this camera too.

The F model’s main difference is the inclusion of a fitting for AG-1 flash bulbs and battery. Agfa decided you could therefore could do without the hotshoe of the I model. As neither camera has a PC sync socket, with the F model you’re stuck if you want flash (AG-1 bulbs stopped being made years ago – there are a small number of vintage ones being sold in packs of 10-12 for $10+USD but are at best guaranteed to work on average 8 out of 10 times for example see here).

Away from the flash issues you have a basic viewfinder camera with a familiar prontor 125 shutter with 3 speeds plus B. The lens is a Agfa Color-Agnar 45mm 1:2.8 which is scale focus with zone markings. The respective qualities of Agfa lenses clog up various forum discussions and a lot depends on year of production but the Color-Agnar is considered the more entry-level lens but many feel there often little between it and the Apotar lenses. Both are 3 element triplet lenses. The lens ring us marked in ft & m as well as 3 zone pictograms. Shutter and aperture are adjusted by rings.

Common with other prontor shutter cameras the shutter sits on the front with a down switch. There is a manually set count down frame counter on the side of the camera as well as a cable point and a solid metal tripod point (which is mirrored on the ever ready case meaning you can keep the camera in case on a tripod). I’ve found Agfa cases wear a bit better than most although the straps do seem vulnerable to snapping.

Although basic specc’d the shutter and aperture work well enough with modern 400 ISO or less film thanks to the f/22. Lens is on the slightly soft side although bit better when shot at  f/8 or smaller where Depth of field should be making up for my inability to judge distances accurately but about what I’d expect from a basic early 60’s European compact (this was never a match for a Voigtländer.  The shots I took with the lens wide in the forest are optically not far off as sharp as the shots in brilliant (abet Scottish) sunshine.  There is very little radial distortion evident (if I’m pushed a tiny amount of pincushion distortion)

So okay for what it is but there are better choices optically. It however a well made camera but if the thought floats your boat seek out one with a standard hotshoe like the Silette I (basically same camera but with hotshoe) or Silette II. There are better basic germaic cameras however.

One thought on “Flash in the Pan – Agfa Silette F Review”