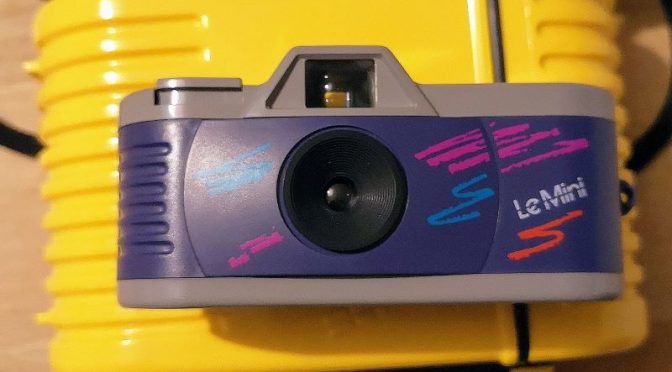 In 1987 Concord Camera Corp launched another 110 camera on an unsuspecting American Public under the Le Clic brand. Concord were not unfamiliar with 110 cameras having launched a fair number of low end run of the mill minox style numbers with and without flash under their various brands.

But Le Mini is something very different even more Lo-Fi and with Cult Appeal.

It is telling that Concord didn’t just title it Le Mini.. They had the audacity to call it Le Mini By Le Clic. A cunning branding exercise for a camera that is no Tour de Force. They even bunged it a yellow hard plastic waterproof case and with good quality neck cord.

Odd as Le Mini is the same league as the the Halina Micro 110 or the Holga micro 110. It’s an all plastic titchy affair scarcely wider than a 110 cartridge. This Lo-Fi central.

Sadly the manual gives little info on the spec. It only recommends shooting from at least 5ft and using 200 ISO in good weather and 400 ISO in duller. A slightly odd view point as the standard 110 film speed was 80-100 ISO in the day (nowadays 200 ISO is the defacto only speed)

However it’s easy to assume the underlying fixed everything spec differs little from the rival like the Halina. This means we’re looking at a fixed shutter speed somewhere between 1/50-1/125. The aperture Is likely fixed within a stop of f/11. The simple plastic lens measures about 27mm from the lens which would fit with the suggested spec.

Unlike the Halina and Holga this is a llttle more styled. Sylvain Halgand notes there are 17 colour variants. However they all share the same structure with a viewfinder atop the top plate. This gives it a retro look a bit like a Ilford Advocate and other cameras of the era. Just a shame about the 80’s logos. The camera and case are marked Japan which is odd as Concord had it’s own plant in China suggesting this may have been outsourced.

Loading is easy. Flip down a door and shove in 110 cartridge. There’s no point in any 110 tab detection as there is no adjustable setting. To wind on you need to pinch the disks on the top and bottom of the left end (as held) with your thumb and index finger. You can either move the camera round that point or just turn the disks that your pinching ( in reality you’ll end up doing both).

Worth noting this action alone doesn’t cock the camera. A small pin on the bottom of the film frame catches the perforation on 110 film and moves over cocking the shutter and locking the winder.

To take a shot just press down the shutter on the right side. It feels a lot more robust than the Halina.

This is Lo-Fi stuff so you need to temper your exceptions. I ran a Lomography Color Tiger 200CN cartridge but forgot to cover the film count window hence the small yellow light leak dots you see on some frames (a common issue with Lomography 110 films).

I did get some issues of leaks and the last shots took on a reddish tone which I suspect was camera rather than film with the shot above being the worst.

The camera has very obvious pincushion distortions. There’s some fringing which you would expect but not too bad. What sharpness there is also falls off from the centre but again this is expected.

But there’s some pleasing enough in a lo fi way shots here. Not great clinicially but enough on a good day to give the Halina a run for the money. It’s variable and I think the shutter position on the front edge makes the camera more prone to shake however as seen in some shots. It is best a couple of meters or more from target but can actually do reasonable well for what it is with the long shot as this shot of Langholm High street shows.

You could get a usable small print from that.

£4.95 plus postage snapped up a pretty much as good as BNIB with case, manuals and neck cord. They are not common and at the time of typing none were on eBay although oddly a case for one was. Only one has been sold recently in the US for j$14.99 + P&P. Sylvain Halgand noted they sold more in the US than Europe so I guess I was lucky with a UK seller. However there’s one on Flickr that was branded to a Dutch Cigarette maker.

This is a worthy alternative to the Halina Micro 110 although the shake issue makes it less reliable. Mines annoyingly leaked more than my Halina, which I know some of you will love.

It’s rarer and has some retro styling charm however and potential collect-ability. Still it hasn’t knocked the Halina off the top of the 110 lo-fi tree but it has come pretty close.

I’ve mentioned both the Halina Micro 110 and the Holga Micro 110 (which may be related) already and bear in mind these can be found in other guises like the Ansco 50. However there’s a plethora of cheap lo-fi 110 cameras out from range of makes. Just do yourself a favour and ignore the Lomography Diana Baby 110.