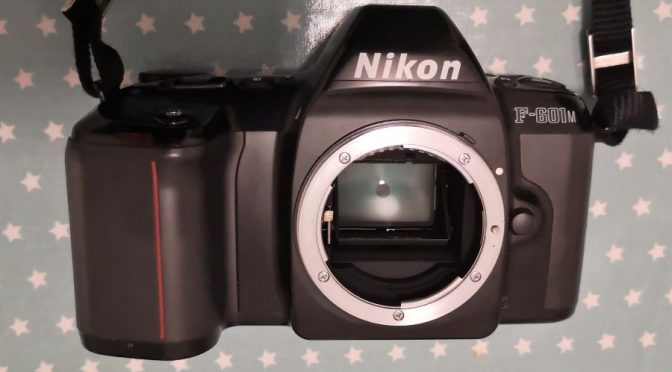 Nikon are one of the Key players in SLR design and manufacture. And I’d argue all the models they’ve produced using their F mount are useable cameras. But there are better cameras amongst the pack. The F-601M although arguably the most technologically advanced manual focus SLR Nikon ever made is not one of those.

It is perhaps the most pointless Nikon ever made

Known as the N6000 in North America, in fact there’s a lot to like here. And good on Nikon for releasing a Manual Focus SLR in 1990 in the middle of the AF boom.

It’s just the camera misses its raison d’être.
The camera works best with AF lenses not manual focus ones.

The mid 1980’s began the rise of AF SLR which Nikon got caught short by. Sure the company like other marks had experimented before with its Nikon F3AF system but it wasn’t a success. Both Minolta & Canon would dump their legacy mounts and produce highly successful AF systems catching Nikon on the wrong foot. Minolta got in first in 1985 A-mount Dynax 7000. This was the first commercially successful AF SLR system. That Mount is still used by Sony today.

Nikon did punch back withe F-501 (based on the manual focus F-301) the first successful Nikon AF. And then came the 1988 Nikon F4 an iconic professional camera that not only featured AF but Nikon’s 5 segment Matrix metering system developed on the FA.

Canon however had already launched a shot across the bows with their EOS system. Launched in 1987, this would rapidly move on to compete with Nikon not just at consumer but at pro level with the EOS-1 in 1989.

The F-301 had been sold in parallel to the existing classics (FE2, FM2 and the FA) and the entry level FG-20. It arguably is a motorised version of the earlier FG offering centre weighted metering in a PAM (Program, aperture priority and manual) modes. But it lacked the newer Matrix metering seen in FA.

All of Nikon’s second generation AF cameras had this as did the F-601 so no surprise this is the potential USP of the F-601M. This makes it the only other matrix metered manual focus Nikon.

So technically it has more advanced metering than the FM3a -the last in house manual focus Nikon SLR. The problem is that it only offers that to CPU lenses.

And how many Manual Focus CPU lenses (AI-P) are there ?

And one of those only launched in 2001. So this camera offers full support (bar AF) to my 50mm 1:1.8 AF-D but for my manual focus lenses you get stuck in centre weighted metering and Aperture priority and manual modes only

And that kinda sucks.

The F-601M is a Nikon F mount SLR with a polycarbon motorised body. Key spec are as follows

The camera has a conventional cable point and a tripod mount. There is an electronic timer. But there are some down points. Firstly no DoF preview.

But hey you get the built in TTL flash ? Well no. Nikon dropped that feature although TTL support for compatible flash units including my SB-600 is not bad. (Note don’t use a non dedicated flash with this as you’ll fry the circuits.)

But worse is still to come. Nikon dropped the spot metering of the F-601.

With the right lens the camera offers 2 different P (Program) modes. P (normal program) is a simple shutter/ aperture combo mode which both incrementally decrease as light fades until the lens goes wide. Pm (Auto Multi Program) takes into account focal length with compatible lenses and adjust to reduce shake (so stick on a 500mm tele lens and the aperture will open quicker to reduce shake than a 28mm wide lens).

it will pretty much work with most F mount Nikon lenses from the AI revision on until the new AF-P lenses. The Electronic diaphragm (E revision 2007 on) will also be crippled but they are on all film SLR and most dSLR. As discussed you’ll need a CPU lens to get the most out of this (pretty much just AF lenses).

However it shows impressive support working with even with my DX AF-S lens (although that crops at the wide end). All AI & AI-S lens although limited work including the E series models. To access program or Shutter priority you need to move the aperture control to the smallest level on the lens. Unlike later cameras like the F55 or F75 you must use the ring for manual or Aperture priority modes.

For lenses lacking an aperture ring (G) the camera works properly in the program modes and shutter priority. In manual and aperture priority modes it stays locked at smallest apertures.

This is a 2nd gen Nikon AF body crippled for manual focus. This is no classically laid out camera as the F-301 was nor the later F3Ma or FE10/FM10 were. Its control layout represents a mid point in the evolution from the F-301 and older Nikons to the later multimode command dial film and digital models.

It is very similar to the F-801, F90 and F100 models. On the right side you have the top plate LCD screen. Good sized with clear icons showing you exposure mode, metering, shutter and aperture info as well as drive mode, frame count and flash info. In front of this you get the on off switch, bracket button and the shift button (more on that later)

Beside the LCD sits command dial which allows you to move between setting options or exposure controls depending on mode. Behind on the rear of the LCD is an exposure lock button (AE-L)

On the left sits a joy pad layout of buttons controlling – exposure mode (PSAM and Pm & Bulb), Bracket, Drive and ISO setting. There is also buttons to switch metering (matrix to centre weighted) and self timer. Many of these have second functions controlled by the earlier mentioned shift button.

Generally this works straight forward but you’ll want to read the manual if you want to use some features especial where the shift button is used. The switch from DX to manual set ISO is bit of a pain in the arse for example.

The upshot is that if you’re use to an older SLR or are moving down from digital this is a bit of a leap.

Its a big enough camera compared to the likes of the F75 and is heavier but at 565gms without a battery weights the same as 1980’s MF Nikons.

The battery and grip make the camera a bit lopsided with weight. i suspect this suits the AF F-601 well as you could get away one hand shooting with it but it confers no real advantage with manual focus. The grip is just too wide for my tastes

The viewfinder is pretty good. Bright and big and with key info on a LCD at bottom (exposure mode, shutter speed, aperture, EV comp warning and manual setting range bar as well as flash info). The highlight is the K focus screen with split image circular rangefinder surrouned by a microprism collar and second collar denoting the edge of the center metering field.

There is no built in Diopter compensation but correction lens exist.

The winder is not silent but better than many competing SLRs. Worth nothing you must manually trigger rewinding this camera.

All the usual old SLR issues apply to watch out for – light seals and mirror bumper foam are getting near the end of life and check the battery compartment. The plastic body makes both the battery cover and door latch issues.

Final Thoughts on the F-601M

This is not awful and it will be a competent enough camera with some bells and whistles. The K focus screen is long lived for good reasons. With most Manual focus lenses it works like a modern relative of the FE2 although without the build quality.

But this could have been something special. Think second generation FA for the 1990’s. Sadly someone in head office really messed up. A manual focus only SLR that is crippled if used with almost any manual focus lens is just plain stoopid. And the spot metering and built in flash are stripped out too.

It beggars the question why ?

It’s telling the FM2 lived on whilst this was in production and the next manual focus SLRs for nikon were more like the FM2. If you have a shed load of of manual focus AI or better glass then the Nikon F-301 offers more exposure mode options with almost the same spec in use (just little more limited in TTL flash modes and has a proprietary cable). To be fair only the FA, F-301 and F-501 offered any more with non CPU lens. No other film or digital SLR made by Nikon offered more than Aperture priority or manual modes.

If you use CPU lenses (aka AF) then this becomes another beast. But then why bother get a F-601 instead and even if you manual focus you’ll get focus assist as well as that built in flash and spot option.

Not awful but possibly the most pointless SLR Nikon ever made.

Why no test shots

I’ve said this before about SLR, assuming the beast is working the shot quality will always be more to do with the quality of the glass and the skill of the camera user rather than the SLR body

Digital to Film has a brief review of this camera but with plenty of shots. For the AF F-601 classic cameras and Simon Hawketts both have reviews. The Great Mike Butkus has of course the manual on his site (drop him a couple of bucks for that)