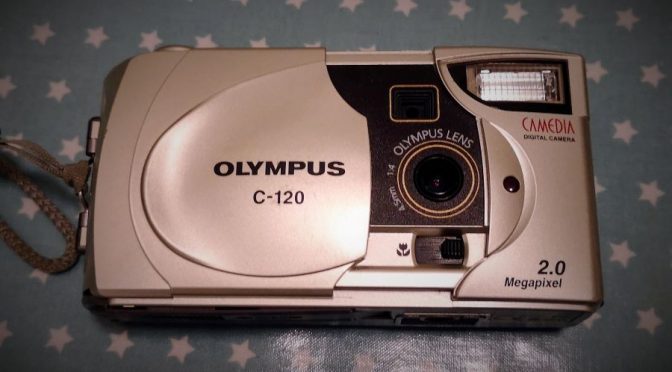 We often stick the tag of crap but good to film cameras. As much as I love shooting film I’m not a total Luddite and have been known to mix it up with digital. But what do budget Digital of yesteryear work out like ?

And what better place to start is my first digital – the Olympus Camedia C-120 (aka D-380). It looks lousy compared to even a modern entry level smart phone camera with Fixed focus and the sheer luxury of 2 Mega Pixels. But why did this camera travel around the world.

2002 was a busy year for Olympus and me . It marked the end of the OM series of film camera but the birth of the Four Thirds system. Great film cameras like the flagship mju-V and the iS-500 were launched. On the digital end camera like the X-1 were taking advantage of the new x-D storage medium.

The C-120 is not one of these groundbreaking cameras.

Back to the future

My life was pretty hectic I’d recently bought a house and moved in with the lady whom is now my better ‘alf. Photography had become a way of documenting our life not a thought process. Although consumer digital cameras had been around for more dcade film sales had continue to grow until the peak in 2001. But by then digitals had advanced enough to compete for market share.

The C-120 was cheap and dependable. i paid some where around £150 for it. I could have paid more of the likes of the Canon Sure shot G2 but this was way cheaper

This is a 2 megapixel camera with a 1/3.2″ sensor behind a fixed focus  4.5mm 1:4 lens. This is equivalent to a 35mm lens on a full frame camera. The lens is a 5 element construction in 5 groups and is described as an Olympus lens (not Zuiko). Focus range  according to the manual is  0.6m to infinity. The figures actually add up to the expected values produced in online DoF calculators. In addition a small switch allows you to enter  a macro mode with a focal range of 0.25-0.6m.

Exposure is automatic. The camera manual lists just 2 apertures (f/4 & f/8) and I honestly think the latter is only engaged when you slide the macro switch mechanically. Shutter purports a  range of 1/2-1/2000 sec but in night modes up to 1 second is possible. ISO range data is not given in the manual but it seems to be only between 100-200 ISO on testing. This limits the camera severely in low light. The camera has auto white balance  (with manual override).

The camera does offer 2 metering modes ESP and spot. I’m not clear if ESP is centre-weighted or matrix. In the manual it is described as ‘Meters the center of the viewfinder and the area around it separately to obtain the optimum exposure.‘ There is an option to adjust EV (±2EV in 0.5 steps).

The camera highest quality mode (SHQ) takes photos in 1608×1200 pixel size.  However this is not the default. The files this produces (~1MB) are too big for even one shot in the internal storage. HQ mode which has a a slightly smaller pixel count (1600×1200) is used. It produces much smaller files (~0.35-0.4MB) indicating there is more compression going on. 2 lower quality & resolution modes  are also available.

There is no RAW option. You get jpeg and that’s it.

Data is stored on either a 1MB internal storage or the long dead Smart Media format. These flash memory cards arrived in 1995 and were popular at the turn of the century. However they were limited to 128MB maximal size and the cards were more prone to digitally wearing out than better tech like SD. You’re unlikely to get new cards and they are relatively expensive (you can often buy a new 128GB SD card for less than a used 128MB Smart media card).

But you’re playing on time  limited resources. That said the 64MB card I got back in 2002 is still working.

There’s a 1.6″ TFT color LCD display, 60,000 pixels on the rear and a built in flash (up to 2.5m). In review mode you can crop your shots or turn ’em B&W or sepia. You can also ste protection against accidental deletion.

Power is from 4xAA batteries. Flash has 5 modes – Auto (default), Red-Eye Auto, Fill In, flash Off, Night mode & Night mode with red eye. Not GN data is given but the range is ~2.5m according to the manual.

The camera is your standard plastic block common for both film and digital camera of the era. It’s done in Champagne silver  and has a sliding door covering the lens like many other Olympus cameras like the mju series. It is bulky compared to high end cameras but actually similar sized to the rubbish Superzoom 80s.

I’ve taken this camera literally around the world and up mountains but it has worn pretty well. There’s some scuffing on the body and minor grot in the viewfinder. It’s not the prettiest but it has lasted.

Load some AA batteries and stick in a Smart media card. You’ll be pretty good to go (although if used the card might need to be formatted in camera first)

The camera is powered on by sliding open the lens cover. There a beep and a delay whilst the ready LED flashes beside the viewfinder. When this goes out you’re good to go.

By default you compose using the simple viewfinder. This has just a centre crosshair. Alternative you can turn on the LCD for live preview. By default the LCD only comes on briefly at start to show you your remain shots, battery status and quality mode but no preview. It remains off until after a shot is taken when you get a few seconds to review.

You can manually turn it on for live preview with the monitor button on the rear. It is not a great screen. Too small and cluttered and the resolution ain’t great but it is from 2002.

Whatever you use to compose you press the shutter and wait. I find it a handy time to think of what to have for tea or watch on telly. There’s at least a second of lags before the satisfying mechanical click and the annoying (but disable-able) beep. this is no camera for action.

In simple use you can switch between the 5 flash modes and turn on the self timer. Flash kicks in around EV100ISO  11 but that as we’ll see is for good reasons.

If you are a muppet you can use the 2.5x digital zoom – Don’t. You are just cropping the image in camera.

The camera has menu mode allowing to do the usual house keeping of setting the camera clock (2000-2099) formatting media and adjusting display brightness. You can as discussed adjust image quality, White Balance (Tungsten shooting anyone ?) and EV.  This is all done via the rear buttons on the display. Worth noting most of these will be reset as soon as you close the camera unless you disable the reset option.

You can also switch from single to continuous shooting. The latter depends on image size (for HQ about 8 frames at 1.5fps). There is also an option for video. Now I’d argue this was the killer app for digital – the ability to switch to video. But the C-120 can’t even do VGA resolution and files have no sound. Video is recorded in now discontinued QT format. You’ll still find converters but it is a pain.

Lastly there are 3 modes. You get the ubiquitous selfie mode (use in conjunction with macro), a 2 shots in 1 frame mode (aka Half frame) and the panorama mode. That is if you’re using an Olympus branded card. If not the Pano feature ( which allows you to overlap individual shots) is greyed out.  That’s just pants.

Look this is gonna be pants by any modern standard.  2 MP is woeful even by modern budget smartphone standards and fixed focus just seems a weird choice. When I open shots on my laptop the weakness seem rapidly evident.

But bear in mind this camera was intended to make 6×4 prints or be used for web images and was typical entry level fodder,

The good news the radial distortion is minimal (slight barrel). But there is some fringing. and sharpening artefacts if zoomed in on.

There is some softness. Better than your average disposable but compared to cameras like the VUWS or even the Harman Reusable It’s resolution is at fault for much of this. Take this shot.

Okay they’re all not great and yes I’m comparing colour and B&W but the Harman is sharper. That may be down to the resolution but..

The camera softens off centre and there is a bit of vignetting going on. The lens flares badly unless straight on.

The camera is also useless in low light. I guess that’s why it pushes the flash on. There’s no image stabilisation. And it tells. The shot below loses out both to poor latitude and shake.

The year I got the camera we went to the Outer Hebrides. I got a a great evening and a lucky shot at Callanish as the sun set on Midsummer’s day. A few months before that we travelled to NZ and it served as well enough.

Can I recommend this ? Not really.

Is it awful ? Well yes and no.

In 2019 the image quality is just crap and doesn’t really have a lo-fi edge to it.  Let’s be honest the images are a bit soft when seen at full resolution. Latitude is crap and the storage media is a dead duck. The Yashica Y35 is way more capable. And that says something.

But this was typical by 2002 entry level standard. For web use it’s okay and yes you can get useable 6×4 but they’re s far as you can go