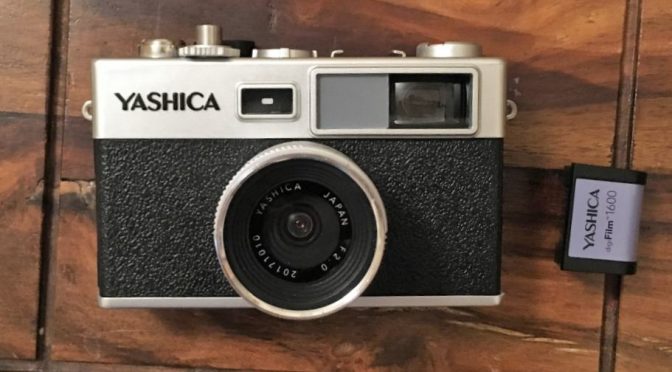 Possibly the most controversial camera in modern times arrived through my door last year. It wasn’t great and even I’ll admit that my phone and even some entry level 2010 second hand compacts are better clinically. But a few of us reviewers felt the Yashica Y35 didn’t deserve all the hate it got.

The Y35’s problems always had more to do with exceptions.

It promised a mix of digital technology with Old skool film like handling to using digital. It wasn’t the first camera to promise the slow food equivalent for the digital photography world. Arguably the first to do this was the Epsom R-D1 back in 2004 which like the Y35 had a film like cocking lever. Others have followed to varying degrees like the Nikon Df, Fujifilm’s X series and the Leica M10-D

And here’s the problem. These are not cheap. The R-D1 cost about ~$3000 USD at launch and even secondhand today it sells for $1200+. The Yashica Y35 came from an unknown company on Kickstarter. The could never have realistically got people to pay hundreds to thousands of Dollars to back something like the R1-D. But weirdly some folk thought that’s they were getting for for $142.

Of course the camera was also damned before it got off the blocks by the Acolytes of the Church of Vintage Yashica. This was digital heresy and needed to be strangled at birth. Of course this conveniently airbrushed out the few ‘Yashica’ digital launched post Kyocera. The knives got out on photo sites even before anyone saw a review copy.

And surprisingly the product that arrived for a pretty low figure did not impress the haters. It is not a great camera as we will see but it didn’t deserve much of the criticism. The company did not help. The Promo images clearly weren’t taken on a Y35. The spec slightly altered (the original promised shutter control option evaporated).

The Y35 digital camera is styled to look and handle like a vintage film camera. There’s no LCD or in viewfinder review. So when you take a shot you need to wait to upload the files before seeing them. Digital Film Filters (DigiFilm) are loaded into the camera like a roll of film. And you even wind on between shots.

The camera is a fixed focus digital camera with a 6mm lens with a fixed f/2.0 aperture. It has a 1/2.5″ 14MP CMOS sensor. That set up works out about the equivalent of using ~35mm f/11 lens in 35mm. Yashica call the lens a 4G as it has 4 Glass elements. There’s no info on that construction and I’m not sure that doesn’t count the flat protective element on the lens barrel.

The company suggested a focal length of 1m to infinity. but if you punch the figures into a DoF calculator you get a more acceptable range of nearer 2m to ininity

The camera automatically controls the exposure by varying shutter (1/30-1/6000) and ISO. You have no control of this other than setting the EV compensation dial on the top-plate (-/+2EV in full stops). The camera uses Auto White Balance (AWB). Broadly this works but you can’t turn it off which means if you exploit the 37mm filter ring with colour filters for B&W you’ll see minimal benefit.

Shots are stored on SD/SDHC cards and the whole camera is powered by 2 AA batteries. Premium brand batteries are good for about 250-300 shots.

The viewfinder is just simple. No framelines or display of shutter or aperture. A single LED to the side tells you when the camera is ready to and taking a picture and along with audible noise serves to ive an indicator of faults.

If that spec sound familiar the grab your mobile or dashcam. The sensor is smaller than most modern compacts but bigger than some mobile phone cameras. There is some speculation that the sensor is one used in dashcams and this may explain why controls are limited.

There is a standard Tripod point but that’s really it. There’s a cold shoe accessory mount for a non existent LED light. It isn’t the same size as standard hot/cold shoes, so you couldn’t mount a flash even if it connected. And although it looks like it there is no cable point.

What Yashica did do very well is create a camera that does feel like you’re shooting a film camera (admittedly a crap one). The loss of that instant feedback is liberating and the fact you need to wind on slows you down more.

And then there’s the DigiFilm. Little cartridges that look like mini APS film rolls. Each of them is effectively a filter for a film effect. The camera won’t work without one. You can swap them about but weirdly you don’t that often like your shooting film

I’ve found I carry just the 200 & B&W. By far the most flexible of the DigiFilms to use. The 1600 has it’s uses too and the In My Fancy & Blue are quirky but not probably worth the money. The 6×6 just needs to be taken out and shot. It’s just awful with that sickly tint.

The B&W seems to underexpose slightly. I suspect this is art of the effect and once you learn it, you realise getting the sky in shot is key here.

I’ll come on to build quality in a moment but when I got this out of the box it looked the part. It’s styled on The Yashica Electro 35 but is smaller much more like the size of Konica C35 auto. There are some nice feature the embossing and indented writing touches are good. The naff plasic EV compensation dial is a let down

A year later and I’ve one big niggle.
The lens barrel is just wrong. It is too long and too narrow. Shame really .

The Y35 makes Haking (Halina) products look well made. I genuinely think they got the folks behind the Original Diana Camera (Great Wall Plastic Co) to make it. There’s a lot of cheap plastic here, a lot of creaky plastic. The SD card/Micro SD slot cover is truly cruddy. The film door catch doesn’t spring open. For over $140USD even I expected more.

That said my Y35 has survived a year and only has some minor scuffing over the instruction label. It only glitches when the batteries start to go.

Before you use the camera you’ll need to load batteries, SD card and set the time. The latter is achieved by connecting the camera to you PC/MAC and there’s a second folder containing windows and MAC software. The camera drifts slowly off time by a couple of minute over 3-6 months.

The weird thing is this does feel like a film camera. You need to turn on the camera with a collar around the shutter button, wind on and shoot. You get no feedback or view of the image as you would with a typical digital.

Nice as this is the experience is far from good. The plastic shutter button is awful on so many levels. There is resistance half way down the depress (and nope that doesn’t lock anything) which you need to push through.

Then the lag. Press the shutter down and it’s a second or 2 before the shutter sound. But even that doesn’t correspond to a shot actually being taken. Move too quickly and things swirl.

Hold down too long and the camera purportedly takes a 1 second exposure but I actually don’t think it does as there’s little shake if you do. I doubt there’s much image stabilisation here.

So What should you have expected ?

It feels hard to make a realistic comparison as nothing like it has been launched on Kickstarter. It was a low volume camera with unique features so technically it would always be out matched technically by a digital compact costing the same money from a big make name.

But 2 other cameras launched on Kickstarter give us some clues. The Lomography Diana Instant Square and Reto3D film cameras launched for less than half of the cost of backing the Y35. Both are considerably better built cameras and the Diana is much more complicated mechanically and offers focus, exposure control and a flash mount. The Y35 comes with Glass optics and the digital sensor but I seriously doubt that cost $70+.

If the camera had been better even possibly metal bodied and with better optics then the price would have been deserved. You were never gonna get a digital rangefinder for this money.

The good news is if you keep more than a couple of meters out things are okay focus wise.. And it does actually hold focus fairly sharp out to to distant objects. I spent too much of the last couple of months reviewing disposable and budget cameras and this is way sharper.

Still soft compared to most modern digitals and the there is quite a bit of fringing going on though. The camera has pretty marked barrel distortion too..

Then there’s exposure. In a evenly lit subject it will do okay but it just can’t cope if you get any back-light in and it struggles with complex lighting. Working like an early 60’s selenium area metered auto exposure camera except you’ve little room to adjust. The latitude of the sensor is awful even by digital standards. Get the sun behind a cloud in your shot and it looks like a thermonuclear arial explosion has happened.

This is a shame as the camera other wise is useable for very low light shooting. But get bright lights in the way and arrgh !!!!

I really can’t recommend you go out and buy one new.

Buy a cheap 35mm compact rangefinder like the Chinon 35EE, 10 rolls of film and you’ll still have enough money to get them processed. You’ll get a bargain real film camera with excellent optics and more exposure control. Or buy a new Canon PowerShot SX620 HS or similar or used Nikon D80 with lens. These are both less than you pay for a new Y35 but offer much better image quality. In fact if your phone is newer 2015 and not a budget one, it will have a better camera.

You have absolutely no feedback or info. The Lag is awful, any back-lighting looks like the world has ended and the lens distorts.

But weirdly this really feels like shooting a film camera. And slow you down in a a nice way it does. Granted it isn’t the only cat in that game. However this is way cheaper than the likes of the R-D1.

And it it can take usable shots if you are aware of it’s limitations. It’s more able than proper toy digitals but struggles to escape that tag. Mines also has been more robust than you might think.

But I still can’t recommend you get one the cost new….

If you must buy head to eBay. Yashica sell them on their website from HK$1880 (about £185GBP) with 1 DigiFilm. Last on sold on eBay went for about £65GBP with 4 DigiFilm as new.

And I guess that actually is a fair price for what you get.

Other Thoughts on the Y35

There are some other more balanced reviews on line. Hamish Gill on 35mmc tested one and didn’t love or hate it. DPReview have a nice YouTube take on one they got sent from Tony & Chelsea Northrop. They didn’t like it in the end but did a fair review.