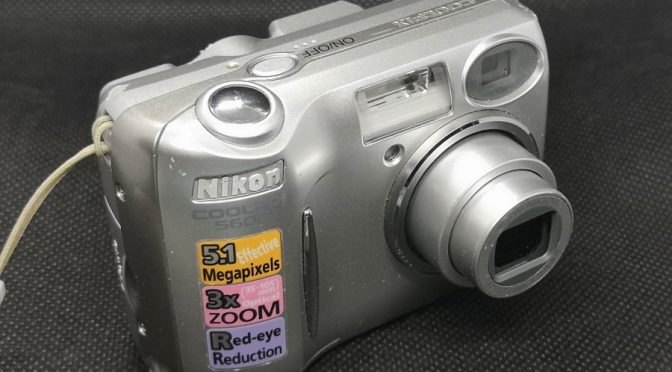 My run of average Joe digital cameras continues with this 2005 entry level shooter from Nikon. 2005 marks the midway point from the 2000/2001 highwater point for film to the generally accepted 2010 almost complete dominance of the camera market by digital. But what does this entry level shooter have to offer. And does a 5MP camera still cut it today ?

In this series I’m looking not at the revolutionary or class leading digital cameras of yesteryear. The focus is simple buy cheaply the camera the average Joe/Jane would have bought.

This arrived 3 years after the first camera I discussed the Olympus Camedia C-120. But things are rapidly different and much more advanced. It was sold around the the $250USD RRP making it just a smidge more than the C-120. Mines came for £3.80 with just the camera and some badly corroded but salvageable battery contacts.

We now have autofocus with a X3 Optical zoom (plus the pointless digital zoom which thankfully doesn’t default kick in). The camera uses more standard and still available SD/MMC cards (although you’ll be stuck at up to 2GB as it doesn’t support SDHC). There’s a now standard mode dial and the LCD goes live by default. There’s also a 14MB internal storage but that won’t capture more than a handful of shots.

The aperture seems to have a minimal degree of movement. It must move otherwise even with a shutter speed up to 1/3000 and 200ISO it couldn’t achieve the EV range on wide from 2.1-17.1. But we’re talking just a stop or 2.

Like many other cameras of the era the default output isn’t the best one available. It’s a 5.1MP jpeg (2,592 × 1,944) but with a little more compression than the 5.1* option. You can if mad enough select lower resolutions for both still and the video mode. There’s no RAW option.

The reason the more compressed image is default is simple. Nowadays you can cheaply buy a 512Mb to 2Gb card cheaply. Back in 2005, it wasn’t the case and 1 Gb card could set you back $100USD. Hence sacrificing more compression for more storage makes sense. For the test I used the default setting (and a 512Mb San Disk Ultra II SD Card).

This is a pretty small camera but quite chubby in that mid noughties styling shiny silver plastic style. It won’t win any awards but at least it can be wielded one handed if you don’t need to change the setting. This included the zoom toggle which gets a bit uncomfortable one handed.

That toggle sits on the rear with a set of controls which is pretty much what you’d expect on the back of most compact digital including ones sold today. You’ve the command dial to the left of the toggle (more on that later)

Below is the usual circular joypad button for selecting options in menu and allows quick access to macro mode, self timer and flash options. It is surrounded by a menu , playback and delete button.

To the left of this is the screen 1.8″ 0.08MP TFT LCD screen, This is hard to see in daylight but luckily you also have a motorised porro style viewfinder. This has nothing bar the focus lock and flash ready LED on the backplate. There isn’t even focus lines.

2 AA batteries power this camera. It seems to have been sold with a set of rechargeables NiMHs but it’s happy with some standard AA batteries. Nikon’s 128 page manual suggest a life of around 220 shots on these. Weirdly you need to change setting in the camera if switching battery type. Lithium rechargeables can also be used

The battery compartment is separate from the door covered SD slot on one side and on the other there is a proprietary port for a USB/AV cable.

In shooting the command dial gives you access to the main modes. You’ve got a default auto mode, video mode and setup modes. You also have dedicated modes. You get a portrait, landscape, sports and night portrait mode as well as a selectable scene mode. The dedicated modes have some sub modes available which is impressive. For example the landscape mode has 4 other choices than the default. These 4 bring up gridlines or markers to make composing shots easier.

The selectable scene mode covers most other foibles. There’s precompensated modes for snow/sand and a fireworks mode. there is handily a backlight and a usable panorama mode (images are taken seperately but with a stitch assist display. This was intended for the bundled software but Photoshop et al can work well with this.

The video mode allows for full VGA (640×480) with audio which was pretty standard for the time. Shame it’s at a measly 15fps but atleasy you can switch from continuous AF to single AF and vice versa.

Menu mode in auto allows you to adjust the basic setting such as White balance, resolution, single shot v continuous. But it’s pretty limited. You do get EV compensation (up to +/-EV) and the ability to alter your colour palette to vivid, sepia, B&W and Cyanotype. But this is no camera really to fiddle with.

The camera has something called BSS (best shot selector). It’s not default but if turned on allows you to take a burst of shots and the camera works out which one you should keep.

The setting mode allows you set the usual suspects like date. You can turn on or off the camera noises and adjust the splash screen. There a Blur detection system that you can turn off but that’s actually quite useful.

On playback, there’s some options to edit your shots on the hoof. This includes something called D-lighting which essential is a digital backlight compensation mask which is actually a neat feature.

The camera takes about 4 seconds to but up. You can change/turn off the splash screen and loading noise. In good light it AF locks quickly and actually has a pretty minimal lag even by modern cheap compact standards.

In low light this struggles to lock and the low ISO range is telling. The cameras built in poor image warning sensor kicks in a lot. Even putting the camera down and using the timer didn’t help that much

Of course folk were likely to use this for close work at night with the speedlight flash. It’s effective range is up to 3m in wide. The usual flash options exist (auto, auto with red eye, on, off, backlight and slow sync)

The good news is the wide end of things in good light is actually alright. in these conditions the camera took okay images for the class.

At first glance the image is as good as your average zoom 35mm compact from the prior decade. In daylight exposure isn’t an issue. At the wide end images are relatively sharp most of the time although some softness can creep in.

Focus accuracy tended to be better nearer although most longs shots were okay they are softer. The landscape mode does help. The edges of the frame are a bit soft and there is some notable barrel distortion. There’s some fringing evident too but what i would expect for an entry level camera.

The tele end is softer on median to long shots. It is good for close up work. it has less distortion (almost invisible pincushion) but the fringing is still there.

What impresses is the macros shooting and the flash. the later has a very limited range but adjusts well for even close shots.

It isn’t great for tracking multiple shots. Worse still it is hopeless in low light outside flash shots. The focus struggles to lock and when it does most of you shots will have the cameras shake warning. this isn’t surprising given the woeful ISO range.

If you zoom in on the images the weakness of early digital cameras become apparent. There’s quite a bit of compression artefact evident and even on the 5.1* setting this is evident but reduced.

So this long shot is okay

But zoom in (pixel to pixel view) and artefacts are evident.

This isn’t down to the optics as a similar area crop of a tele shot taken from the same position shows. Less artefact and much more detail

Colour saturation is reasonable. You have the option to change if needed.

5.1MP sounds low in an age when smartphones take images into double figure MP-wise. But it depends what you wanna use it for. For web use this is alright as this blog shows (most of the image here are about 600px wide but you’d easily get away with displaying these image on monitor up to HD (1920×1080) unles you zoomed in.

300dpi is usually the reference for printing. Because of the arefacts I wouldn’t seek to make prints bigger than 7×6 out of the box but with some photoshop trickery up to 8×6 should be possibe.

Of course the issue is if you wanna crop…..

In 2005 this was reasonable

What’s not so good

But not great. Its okay in daylight as long as you don’t blow your results up and is broadly competent at daylight in use. it’s just pointless in low light and the lens is average at best. You get more artefacts than I’d like. And you have almost no control

Other than the optical zoom, even a modern budget sub £100 smartphone like the moto G6 is better optically and offers more features. But then again that’s why the smartphone has killed the compact market.

As mentioned Nikon still has the manual on their site. For reviews when it was launched check out imaging resource, photography blog and DP Review.