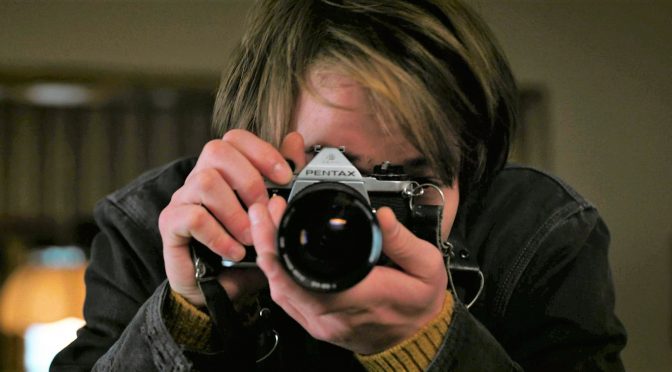 So the midnight hour fast approaches but you haven’t got a Halloween outfit. Fear not on this ghoulish season here’s five film inspired fancy dress outfits for film photography fans.

Okay. You knew this one was going to be here.

Lydia remains one of Winona Ryder career defining roles and in fact is a pretty easy look to follow. Cue black dress, jumper/jacket and a broad rimmed black hat (but idealy not pointy) and raid your Kohl etc for your inner Goth

Lydia gives you 2 camera choices. She is most famously seen with the above Nikon. The consensus view is that it s a N2000 (F-301) with a SB-15 speedlite. I actually wonder if it was the N2020 (F-501) as some shots show a distinctly early AF Nikkor lens mounted.

If you can’t find the hat or don’t wanna a Nikon you could also pick up a Polaroid. This a 600 series camera which impossible still makes (believed to be a Sun 660 Autofocus). Price vary and you’ll pay more than the N2000 with a lens for a tested warranty one.

Dennis Hopper’s raving Photojournalist superficially is an easy enough look. You just don’t need to shave for a bit, get some shades and a red banana and ….erm ….about 5 Nikon F cameras and lenses.

Chances are if you have 5 Nikon F cameras you probably look like this anyway. I guess you could budget the look with some zenits – the horror… the horror…

There’s a very sad backstory. Hopper based the character on Errol Flynn’s son whom disappeared and was probably murdered in Cambodia in 1970.

Want a hip and current yet retro look ? Go as Will’s camera toting big brother from the mega successful Stranger Things TV series. Johnathan provides you with ample opportunities to go 1980’s with some of that Nylon at the back of your wardrobe.

Of course everyone will just assume you’re simply badly dressed without the Pentax camera and Johnathan’s retro strap. There’s a bit of a debate about whether the SLR is a MX, ME or even ME Super. But I’m inclined to go with the good folk at Pentax Forum. The flash is a Pentax AF200s.

The series also features another polaroid ( original One step (SX-70) wielded by Karen, the matriacrch of the Wheeler household. More flammable Nylon and hairspray however might be involved in that look than Health & Safety allow these days

A Harry Potter school kid look is easy enough to pull off. You can of course pay loads for replica robes etc. But for the frugal with a grey jumper and a dark coloured dressing gown you can do much the same. If you’ve an Argus C3 (matchmatic if you’re being stickly) you can instantly be Colin Creevey.

Shame he’s a bit of an annoying ar*e in the film.

Rated consistently one of the best Horror films of all time, sadly this look might be missed by the unaware. Dodgy overcoat required and a 16mm camera. The camera used is believed to be a 16mm Bell & Howell Filmo 70-DR. These are highly regarded by collectors and enthuiasts. You can still pick for around £100 but without the pointy bit

Did I miss any let me know in the comments !