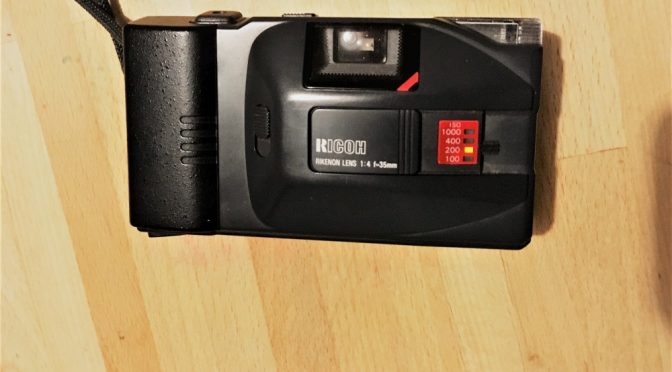 Not  exactly the pinnacle of Ricoh’s output, this little cheap ‘n’ cheerful fixed focus compact actually was surprisingly good despite my review one being half knackered. But it actually still managed a better run than the Olympus AM-100.

Ricoh is one of the handful of Japanese  Camera companies that survive in the 21st century. Oddly they’re now better known for photocopiers  but every so often turn out some high end digital cameras. They shift more cameras under the Pentax brand (in a strange reversal they ended up taking over their former sometimes rival’s imaging division in 2011). They are probably best know to film enthusiasts via their TLRs, K-mount SLRs and their rangefinders like the 500RF.

The YF-20 is much simpler fare.
It is yet another 80’s fixed focus P&S in the mould of the Olympus Supertrip but with added motorwind.  Aimed squarely at both the bargain end of the developed world market and for the burgeoning markets in developing economies like China.

Spec wise you have a pretty typical camera in the class with a  35mm 1:4 lens, combined with a single fixed shutter speed (1/125). There is no real exposure control – the aperture is manually set to match film speed (100, 200, 400 and 1000 ISO). The camera relies on film latitude to give an exposure range and will encourage you to turn on the flash when light falls too low.

The YF-20 spawned a series ran into the late 90’s many with the same YF-20 suffix. Later models like the YF-20N added DX coding and an infinity option. (see camera-wiki.org page on the YF-20N for more links to the whole series)

Unlike the Supertrip, the YF-20 and its later siblings  need batteries (2xAA)  to work (motorwind is needed to cock the shutter). This was an issue for me as the battery door on my one was increasingly dodgy.

Slave to the Brick ?

Stylistically the YF-20 is nice enough a late 80’s plastic brick. Not a million miles different from the Ricoh FF-9 with a swings out 90º flash. The lens cover fires open at speed with a satisfying but loud clunk (covering the ISO settings). The top plate has a mechanical film count dial and manual flash switch as well as a shutter button. Unusually for the class, this has threading for cable release.

The viewfinder is a simple reverse Gallean  number with no frame lines. It does have the low light LED in it however.  To left of the viewfinder is the flash ready LED and a mechanical indicator that the film is winding. There is no auto rewind of your roll at the end.  You need to trigger a small recessed lever on the base by the standard tripod mount. 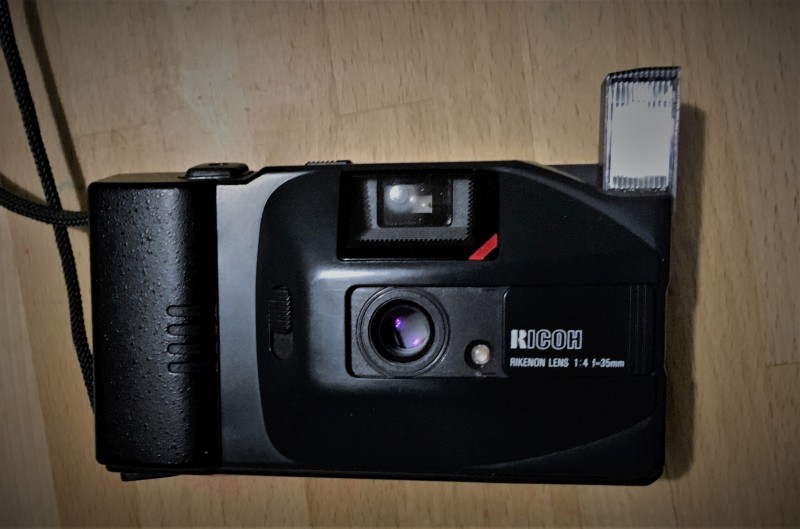 Ricoh recommended a shooting distance of 1m to infinity. They also rate the flash as a weedy but class typical GN10.

Given the exposure sytem (or lack of) being tied to film speed, this camera favours 400 ISO.  With a 200 ISO film focus is not too bad in in the 2-5m zone but falls off beyond that. The dog shot above is pretty typical of what results you can get around 2-3 meters

At 200 ISO distance shots  are soft, more so when exposure isn’t optimal as the shots above show . Things can clean up with a bit of photo editor auto adjust magic. There is no surprise that later models like the  YF-20N added the infinity setting.

The camera relies on latitude so I found there is a risk of both under and over exposure but again this is no different from other cameras in the class. infact you can exploit this somewhat with B&W film on cloudy days to give moody sky shots over darkened foreground

Given these limitations, the Rikenon Glass lens pleasantly impressed me . If shot right it can be sharp especially at 400 ISO or above. It also has less radial (barrel) distortion than cameras that would have cost 5-10 times as much.

Overall this is not a bad example of  the class. It runs neck and neck with the Olympus Supertrip optically and wiped the floor with the higher spec AM-100. It also comes with an additional film speed and a quirkier flash. However I’d still hang on to supertrip. The supertrip is usable without batteries, lighter, more compact and offers a choice of flash modes. If I had the chance -I’d go for a later model with the infinity focus mode like the YF-20 Super (aka L-20) but not the DX coding  like the YF-20N.  That said this is pretty good for a lomo option.