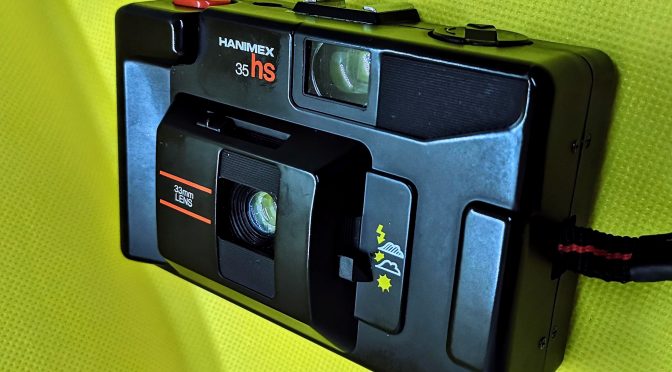 Yet another 1980’s plastic bodied lo-fi shooter which was likely made by Haking for Hanimex. Launched in 1986 it is not exactly top flight stuff. But is there enough to appeal to lo-fi shooters ?

The camera was launched at Photokina in 1986 according to Sylvain Halgand. And I’d also agree with him in that it was probably made for Hanimex by W.B. Haking as the camera is very similar to the Halina 150 (aka Ansco 135). In fact both the 35hs and Halina were made in Macau.

There is only subtle styling differences. Essentially this is a fixed focus camera vertically sliding lever on the side of the lens protrusion which moves between 3 Waterhouse type aperture stops

Sadly even with the manual, there is little info on the specifications. The manual confirms a 33mm 1:5.6 lens but little else. So we know the flash/dull cloudy setting is f/5.6. It is highly probable that the cloudy and sunny/light cloud settings are f/8 and f/11 respectively. I suspect the shutter speed is likely within a stop of 1/100. Saturated Imagery shares this view in his review of the camera.

it’s a solid little black plastic box. Not exactly stylish but typical of the era. For user controls,, all you get is the aperture slider, shutter button and the slide to cover the lens. There is no cable or tripod point.

To load pull up the rewind spool to open the film compartment door. Inside you’ll find a standard slotted take up spool. Worth noting the film plane is flat and the camera will cock just by winding via the thumbwheel winder. There’s an easy to read film counter between the hotshoe and shutter button. This automatically resets when you open the film compartment door. There is a standard depress pin on base to allow you to rewind.

The camera has locks to prevent multiple exposure. I haven’t tested it with film but mechanically if you depress the film rewind button with your film slightly tensed and wind on you should be able to do a MX.

There’s no tripod or cable point. My camera came without flash (it was in original box). However Sylvain Halgand describes the camera sold with a flash with a flash unit suggesting a flash kit version exists. Of course you’re not limited to that flash. This allows for some interesting options.

The viewfinder is simple with no grid lines. But it is bright and of a good size.

Given this is a cheap plastic camera, it is above average for it’s class optically and produces not bad lo-fi shots. It isn’t quite as good as the Hanimex 35 se but is better than many a disposable or re-loadable disposable like the Yashica MF-1 and way easier to load.

Like most cameras in it’s class it is a little soft with worsening to the edges and better within 10m of its subject. That said it isn’t that soft within 10m and the fall off to the edge is less than you would expect. Be mindful that shooting in bright light or with fast film to keep aperture minimised helps a lot

It does fall off at distance but no worse than most in it’s class.

This is alright. Better than most single use/simple use cameras and as a Lo-fi plastic shooter, it is just above average in image quality. Also it’s pocket-able but the styling wont please everyone. It also has zilch extra features over the aperture switch.

Alternatively its stablemate the Hanimex 35 se is optically better and more features like a built in flash, filter threading and cable point. It is more bulky however. The Olympus Supertrip has similar features and is not bad optically. And of course if you want legendary good plastic look at the VUWS & clones and the Goko UF. For cheap but class the Halina 1000 has some appeal and similar options

So not bad but there are better,