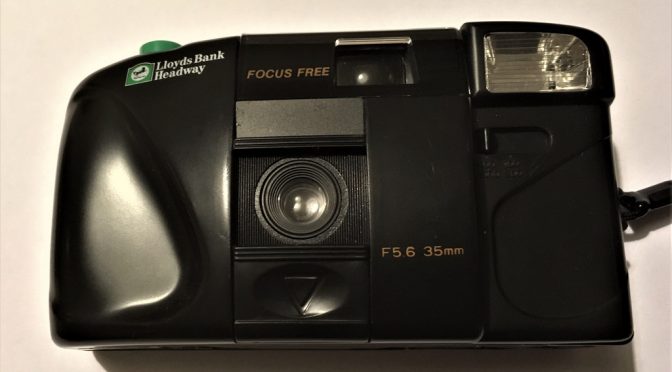 One of my favourite Toy/Trashcams is the Barclaycard Visa camera, so when another banking promo camera turned up on eBay for 99p I couldn’t resist. But was I overdrawn to this plastic-flashtic camera or did i get a good return ?

Let’s be clear from the outset.  This is a total different beast from the Barclaycard camera.  This is a more modern looking camera that probably dates from the 1990’s.  It is quite bulky and a lump of black plastic. I’m dating it before 2000 as later freebie cameras like the Reader’s digest/Vivitar camera were much more compact and smaller. At least the neon green shutter button and rewind knob add a dash of colour. Like its rivals, I suspect this camera can found with other corporate logos attached.

The Headway in the title is from their Youth account  at that time. I can’t see any evidence how this was given out – was it just a promo advertising gimmick or (less likely) given away as an incentive for new account holders ?

We have a simple plastic camera belonging to the Olympus Supertrip class. The camera clearly is of fixed shutter speed (i’m guessing 1/100sec or there about). A slider below the lens controls the aperture by moving  a strip with 3 aperture holes (Waterhouse stops) over the lens. The widest of the 3 settings (f/5.6) also activates the flash (if the 2 AA batteries are installed).

Intended to be used in reasonable light without flash just like the  Supertrip but unlike the supertrip, there’s no low light warning. Bar a flash ready light there isn’t much else to say – no cable or tripod points.

Transaction fee – In use

There isn’t much to note about use. The camera has a conventional loading sytem with a slotted take up spool. The advance is down to your thumb on the rear thumbwheel. To take a shot  wind on, simply slide down the lens cover and look through the viewfinder which gives you a smaller frame than your actual shot  The sliding shutter switch doubles a shutter button lock. There is a easy to read mechanical film counter on the top plate.

Clearly you’re meant to leave the camera matched to the film speed except when light falls off below 11-12EV when you’ll use the flash, However like other cameras in the class, you can of course exploit the film speed setting to give you extra stops as the light falls (or vice versa). 400 ISO film is probably best here as you drop down to the 100/200  ISO setting and then if you take the 2 AA batteries out you need for the flash (they’re not need to use the camera) to f/5.6.

Not that f/5.6 is a good idea. This a fixed focus camera with a cheap 35mm plastic lens. Shooting with a  narrower aperture is always gonna be better here especially at distance.

That said, it ain’t all bad. In close to median distance it images are reasonably sharp centrally for a plastic lens.  The Image increasingly softens the further from a peak range of 3-5 you get but within 10m useable and even further images with the camera set at 400 ISO are okay. At  100/200ISO setting things soften too much to make it worthwhile for anything over 7-10 meters. The Halina Smart S is sharper at the peak distance 3-5 m but the Lloyds is more consistent when used at 400 ISO.

There is some notable  fall off centrally  (not as bad as the Halina Smart S). I also found the flash seemed to a better. The camera vignettes obviously when set at 400 ISO. Weirdly although this gets better at 100/200  it comes back with a vengeance on the flash setting. There is quite a bit of barrel distortion too. The shutter cocks before fully winding on . Because of this I accidentally created a double exposure on the last frame on both rolls I used.

On one hand this  is a reasonable abet mediocre plastic lens camera of its class. It takes okay shots in the 3-7m zone and is best as you’d expect with 400 ISO.

However it is bulky and lacks character compared to cameras like the Barclaycard Visa one. It also falls between 2 stools optically. There are better clinical cameras in the class like the Supertrip or the Hanimex 35SE.  And nor does it have quirky optics like the Halina 160/260  or Lomo Zenit 35F. It also doesn’t have any redeeming styling like the Halina Micro 35.

In the end this feels a bit like its namesake  youth account. Competent enough but you’ll soon be moving on to something better.  So no great rival to Barclaycard Visa Camera.