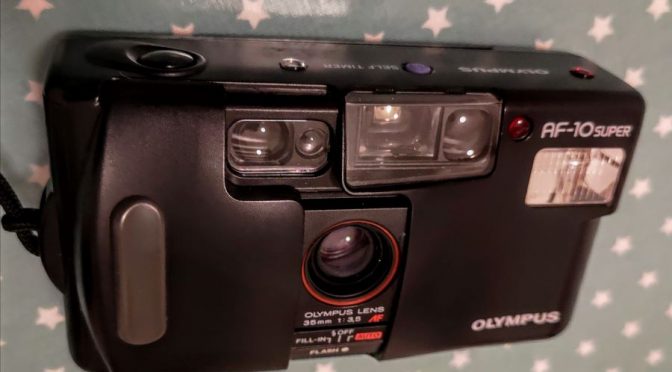 For the canny photographer, there have always been bargain cameras that are nearly as good as more expensive classic. But one camera recently I’ve noticed has been had that status elevated above that. Enter the Olympus AF-10 Super (aka infinity Jr) , described by some as “Just like a mju“

But does this more humble camera measure up to arguably the prototype for the elite compacts that would follow ?

Some of you might remember VW ran a very successful campaign for the Golf car in the UK about 10 years ago. The premise was lots of people claiming their cars were ‘just like a golf” when they really weren’t.

Olympus entered the AF compact race badly wrongfooted with C-AF in 1981. Sold only in Japan to my knowledge, this is one of their weirdest cameras looking cameras. Basically looking like Dr Frankenstein had decided to take a classic Olympus rangefinder like the 35RD and butcher it by adding a AF system system and built in Flash. In 1977 that could be forgiven with the rush to compete with the Konica C-35 AF but even that is better looking and by 1981 the design standard of early AF compacts had been set the original Canon’s Sure shot.

By 1984 Olympus had kinda got thing back into control. They launched 2 lines. The short lived AFL series of high end cameras and the longer surviving but basic Trip AF camera. The first of the latter , the Trip AF had a notable 2 focus steps !!!

The AFL series would be superceed by the AF series. Launched in 1986 these were more modern designs with sliding clamshell covers. Known in the US as the Infinity series, it’s easy to see the speculation that these were the prototypes of the infinity stylus series (aka mju). In reality however Olympus used the Infinity name on a wide range of cameras including the Infinity S (aka AM-100).

The later models of the series such as the AF-10 mini (OZ-10) and the AF-1 mini (Infinity Mini) were sold as mid range between the mju and Trip AF.

Known as the Picasso Mini Super in Japan this camera shares a lot of specs with the later mju.

The other big technical difference is focus steps. The AF-10 Super has just 5 focus steps according to camera-wiki. Olympus didn’t trumpet that too much but was class average for a late 80’s early 90’s AF compact. Olympus did like to point out however that the mju had 100 steps !!! It also focuses to 35cm where as the AF-10 Super only gets to 65cm close.

Bodywise the AF-10 does feel like the slightly older more practical brother. Not as neat and the clam shell doesn’t cover the viewfinder and half the AF system. But reasonably well made and although bigger than the mju still coat pocketable. It lacks the va va voom of the mju though.

Sliding open the camera turns it on & unlock the shutter. Unlike the mju there is no noise at this point. The camera on light comes on until the flash charges up.

There is a lock switch on front to turn the flash from auto (default) to off and forced on. Now this will default to auto when the camera is closed but it feels more convenient than messing around with small buttons. For the hardcore zero flasher, Hamish Gill (35mmc) details how a bit of creative dremel engineering can default the flash to off even when closed.

The camera also has that nice feature of locking the motordrive until you release the shutter button. The wind is about average noise for a late ’80’s compact.

Holding is okay too with the sliding door cover featuring some degree of a hand grip.

The viewfinder is basic. There’s frame lines & a AF focus point but no parallax error lines. There are 2 LED for flash a and focus. However the manual warns too near focus doesn’t always work and this certainly seems the case. Top plate has a ready light (yup this another camera that pre charges your Flash) shutter and electronic self timer.

Well the good news is this is a competent enough AF fixed focus compact and would do well in a tussle with a Ricoh FF-9 or FF-9s. It is broadly well exposed in average situations.

Shooting with 100 ISO film in good conditions this can be a good shooter at the 3-15m mark. But above average it may be it just lags that bit behind the mju. At longer shots the AF-10 super at lower speeds does seem perhaps to be better

The mju gets much crisper at 400ISO where as the AF-10 super just just goes up a smaller notch.

Also at any ISO the mju is just better exposed in low or more complex lighting. But you kinda knew I was going to say that.

That said the camera ain’t bad.

From a distortion point of view there is quite a bit of pincushion distortion. It does soften a bit to the edges.

Both cameras give false lock readings close up (the AF-10 Super warns you in the manual. But it is still bloody irritating. These cameras scream that they want you to take them in close but neither gives enough feedback to be reliable.

Unsurprisingly the hype isn’t quite met here. The mju is the better of the 2 cameras by some margin with the exception of the long shot. It has a wider exposure system and more focusing steps. I also think the lens is just that bit better…

But this is a fine enough compact. It’s a bit like the reality of that VW car advert. I’d love to drive a VW Golf but I’m stuck using an inherited Vauxhall Astra. And ya know it gets me from A to B in comfort and has been surprisingly reliable in the 100K+ I’ve added to the mileage with mainly just expected wear and tear issues.Not quite as glamorous nor sought after but does a fine job.

And the AF-10 Super is a bit like that. As a cheap fixed length compact you could do a lot worse.

The obvious rival to this is Ricoh’s FF series cameras especially the FF-9 & FF-9S which were sold either side of the AF-10’s launch. What probably makes a more interesting choice is a Yashica T-AF which you might just sneak for mju money. Killer optics if you can live with the styling. Of course I’d make a good argument to consider a good Zoom compact like that Pentax Espio AF Zoom which is better and offers more options even if you never touch the zoom toggle

Mike Butkus as ever has the manual free to download (but do try and give him a wee donation for his trouble). Hamish Gill pushes this camera to its low lights limits in his review at 35mmc. Pekka Keshinen has a very positive take on this camera (I’d argue too positive) over at Attempts at 35mm. Film Photography Lust didn’t exactly lust after it in their review, but found it like me. Okay in an average way.