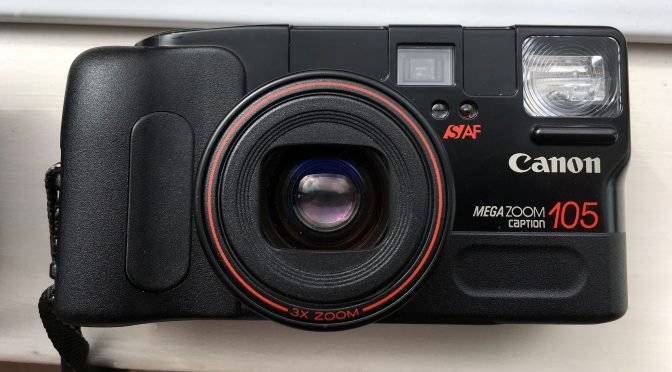 Like the name everything is big about this camera (aka Prima Zoom 105 or Autoboy zoom 105). But this bulky early 90s zoom compact has acquired a bit of reputation as a sharp shooter. But does it live up to the hype ?

I’d got this just after the Pentax Zoom 90, so there’s what you would think an obvious comparison. Pentax was building on their market innovator and leader role at this time with very advanced technological camera that were the forerunners of the Espio series and the Zoom 90 does outsmart the Megazoom menu option wise but as we’ll see the fight ain’t over.

In some ways these 2 cameras represent an interesting snap shot in time.  Pre-AF, neither Pentax or Canon had any history in full frame 35mm compacts,  being best known in the late 60’s and 70’s for their SLR cameras (although Canon did a foray in half frame and made the classic fixed lens canonet rangefinders).  But these unlikely suspects would shape compact development from the late 70’s into the 21st century. Although Konica brought us mass-market AF compacts with the C35AF in 1977, it was Canon that really nailed things in 1979 with the original Sure Shot aka  AF35M, the first active AF system compact and the first in the long running sure shot series. Pentax came in from nowhere in style with the IQzoom in ’86 the world first zoom compact and what would become the predominant model that bridged the late film era into digital. In so doing so Pentax came from nowhere to the leading AF Zoom manufacturer arguably until Olympus got it’s mojo back with the stylus/mju series.

Lookwise there isn’t much in it. Both are massive lumps of black plastic but the Pentax is softer at the corners feeling just a bit more 90’s than the canon.  In an era when automatic lens cover was becoming de rigueur the canon still has a lens cap (this perversely means getting a slip on filter is a more likely option). The Canon is 40gms heavier at 445gms without battery but is a much better balanced camera and the viewfinder sits centrally over the lens.

2 models exist the core model and the Caption one. The later adds a databack and a handy remote control that is detached from the body. This was sold as a non user battery replacement model but mines still worked a quarter of a century later. When it dies or if you’ve a standard model there is of course an electronic timer in the menu options on the rear.

The 3 menu button sit beside the LCD screen on rear and give rise to the usual suspects. One covers flash moving from auto to on to off and slow sync for those family shots in front of the Louvre at night. There’s a timer/continuous button and between the 2 is a red eye reduction mode. This covers the bases but lacks the bonkers option of the Pentax (although having a Bulb option in a compact zoom is an interesting choice). However that red eye button gifts the canon withe option to switch from smart AF to spot focus AF by holding it down for a couple of seconds until focus light starts blinking. There is no EV compensation nor distance focus options. The camera uses DX coding and non DX films are set at 25 ISO.

The data back on the Caption model allows you to add a data or time (and goes up into the 20’s so still useful) but also allows you to add 1 of 5 naff caption like Happy Birthday  instead. Luckily both can be turned off.

But then again the raisin d’etre of a zoom compact is not about menu choices – it’s all about taking P&S shots. Things don’t start well – this is not a speedy camera. It is slow to turn on and the zoom is slow and noisy compared to the Pentax.  But things improve once you’ve got your focal length. As I’ve said despite the bulk this camera is nicely weighted in hand.  Using the viewfinder is fine with both left and right eyes although you can’t get that close to it. This moves as you’d expect with the zoom and the lens barrel has a few focal lengths printed on if that’s your thing. The core shutter and zoom buttons are logically placed and the camera hits focus reasonably quickly.

What amazed me about this camera is that it can be incredibly (SLR rivalling) sharp for close up shooting with the 105mm end of things and given you can get in as close as 63 cm (2 ft)  this is great camera for close up work (worth noting the 35mm end you can only shoot from 1.6 metres away). The 105mm end seems to be the better with little distortion I could see and is that bit sharper but has a tincy bit of pin cushion distortion. The wider end is just a tiny bit softer. That said it was  better than the Pentax Zoom 90 when on focus and certainly for the P&S market more than admirable.  As you’d exect the camera is better overall at short to median distances. Longer shots are okay but this is always a weak spot for AF compacts especially the zooms and this model lacks the landscape option that closes down the aperture to improve depth of field.

Getting the focus right is interesting here as you have 2 options. The default is Canon’s smart AF (SAF). You still need to keep your target roughly central but the camera wil assume the target my guess is it finds the nearest object in the focus box). This can be handy for quick shooting as its likely to be your target but as the shot above illustrates if things get complex it can select the wrong focal point although the shot is still acceptable. But you can switch the camera over into more routine single point AF perhaps better in these situations.

This makes it a pretty interesting proposition. It certainly was better than the Pentax Zoom 90 and it did out perform the later Pentax  Espio AF Zoom (my gold standard AF Zoom) in close up and gave it a run for the money but in the end the Espio wins out as  it’s just that tiny bit sharper overall. It is smaller and offers key functions like backlight EV compensation in a more pocketable fashion. And that’s probably the issue this is a competent AF Zoom that can work almost as well as newer cameras but it is a brick.