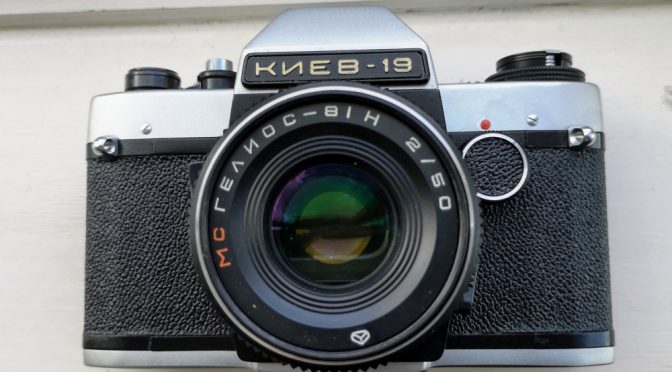 Usually when I review an SLR I tend to caveat my reviews by pointing out optical performance depends on the Lens glass and don’t focus on that side of things. But with this Ukrainian beast it really is all about the glass in the form of the Helios-81N ( гелиос-81н )50mm 1:2 lens.

But let’s not ignore the camera and we’ll begin there.

Think of Soviet era SLR cameras and you’ll usually come up with the name Zenit or Praktica which many a British teenager cut their photography teeth on in the late 70s’ and 1980’s. But beyond the miriad of these M42 mount cameras there was a brief SLR arms race between 2 other Soviet camera makers.

In one corner we had Lomo the folks behind the LC-A. In 1979 they launched the Almaz series of cameras. Only the Almaz-103 sold in any numbers (the other varients were either prototypes or very small runs). All essentially were based on the Nikon F2 but with a Pentax K mount. You’ll need to pay F2 money to pick them up.

Nikon on the Dnieper

Then there’s the Kiev 35mm series. Made in Kiev by Arsenal (hence the name) the Kiev series weird goes from the Kiev 5, a Contax style rangefinder, to the likes of the Kiev-60 medium format SLR and the Kiev 80 & 90 Hassleblad type medium format cameras. And Arsenal are well regarded for the work they did with those medium format numbers.

But for 35mm things started weirdly. The first 35mm SLR they launched was the Kiev 10. On the plus this was the first soviet SLR with autoexposure. On the down side it and the later Kiev 15 cameras use it’s own lens mount making really only one for the collectors.

The Kiev 19 (in Cyrillic Киев-19 ) is a relatively rudimentary SLR. It has a Non AI Nikon F mount and uses stop down metering essentially in theory allowing you to use almost any Nikon F mount lens from the 1960’s up to current day (note the in theory bit for the moment. Whilst it gains the TTL metering it weirdly loses shutter speed compared to the Kiev 17 with a shutter range from 1/2-1/500 sec plus B. those shutter speeds are set on a dial on the camera front. The ASA setting goes from 25-400 ISO again limiting it. Worth noting some versions have the older soviet GOST film speed setting (easily adjusted for).

Its a brute of a camera. At 932gms with lens, filter & cap on it’s almost 300gms heavier than my F75 with Nikkor AF-D 50mm. The viewfinder is big though and I found the viewing screen good. There seems to be some variation in that screen. Mines had just a circular microprism as does the one reviewed by Lensbeam. However Mike Eckman and Jürgen Becker (Through the F Mount) have cameras with a split focus spot and microprism collar.

The viewfinder has minimal display. There just 2 LED a + & – warning you of over and under exposure. Ideally you should get a + & – when you’re on the ball but I tended to find it wouldn’t level that often. However that makes sense to me as exposure is nver likely to e a perfect whole EV value.

Worth noting the LED’s are hard to see in bright light and you’ve no in viewfinder shutter or aperture info. The metering system seems to be the minor Achilles heel of the camera as it often goes. that said the Vertical travel mechanical shutter is not dependant on it. That one hell of a heavy shutter as it sounds & feels more like a early 70’s camera with the amount of mirror slap you get.

And of course this camera really does feel like a much older camera. To put it into context 1985 was the year that Nikon launched th F-301, the manual focus camera that would be the basis for Nikon’s first AF SLR (not counting the F3-AF weirdness). the F-301 is seen as consumer SLR below the likes of the FM2, FE2 and FA prosumer models, and boast all the features that mid 80’s electronica could offer. Of course that an unfair comparison but so is comparing it to the Nikon FM2 which is often seen of one of Nikon’s finest MF cameras.

In reality it feels more like my Nikkormat FTn. But here’s the rub. Like the Kiev 19 the Nikkormat on paper (and in reality) allows you to use most non-G class F mount lenses often with stop down metering. It also displays the shutter speed in the viewfinder and goes up to 1/1000 and can meter from 12-1600 ISO

And it really is lens compatible….

Beginning with the Kiev. Yes i could mount a range of Nikon lens from my Nikkor-S 50mm 1:1.4 pre AI right through manual focus AI lenses to my new bought 50mm 1:1.8 AF-D. And you could use all of these but there was an issue with the step down mechanism releasing in all of them. So do-able but not ideal

The Helios 81-H meanwhile mounted perfectly on my Nikkormat but for the life of me it couldn’t mount on my newer Nikons like my F75 and the dSLR D50 at all. I’m not alone as these posts by Lensbeam & grokphoto describes. It’s in part down to the plastic skirt that surround the mount. If you’re feeling Gung ho you can file that off as the lensbeam post describes but that’s not for me.

It also mounted onto a cheap F mount to micro 4/3 adaptor allowing me to show these shots. Bear in mind that even ignoring the crop factor the adaptor added about a inch to focal length narrowing the aperture. It still shows the swirly bokeh even here.

So why bother ?
Well the lens is quite peachy.

Wide( despite only going out to f/2) you get a lovely swirly Bokeh. Not quite as good as the Helios-44 but still pretty mouth watering. Close it down and things go sharp, Aperture is in Half stops and the lens can focus down to 0.5m. It has 6 aperture blades and is a double guass construction with 6 lenses in 4 groups. The glass is apparently lanthanum  glass  which purportedly helps reduce chromatic aberrations. It’s also very slightly radioactive (negligible difference to background radiation and about 1/10000 less radioactive than Thorium glass lenses)

Mines has a 52mm thread but the one described by lensbeam had a 49mm thread indicating production variations. The close focus length also varies. The Glass set up is essentially the same between the 81-H, 81-avtomat and the later 81-M and the Arsat-H. there may be variants in the multicoating between these and within models. A good oversight can be found at allphotolenses.

I got mines in unused condition in original box with all the expected gear including case from a Ukrainian seller for a penny less than £35. Postage took that over £50. And it is pretty immaculate and works as should. For the same money you can easily pick up a Nikkormat FTn with a lens. That’s a more capable camera but will be more likely in need of a CLA being potentially at least 43 years old and possibly over 50 !!

Of course you can pick up a later AF Nikon like the F75 or F65 which for a few quid will not only have AF but all the perks that an electronic shutter system can offer with PSAM and shooting modes. Of course I’m well aware my F75 will be dead meat once the electronic shutter or metering goes and whilst my F75 will work with most lens from the AI era onwards the support is actually more limited for MF lenses.

There are 3 reasons you should consider buying this camera. the first is the lens and it’s likely you’ll struggle to source one for much cheaper than buying a kit with the body. As a prime lens thet you can use with Nikon bodies it is well worth hunting down although it isn’t 100% compatible and may need modification to work with your body.

If you’re a soviet camera fan with some Nikon Glass this makes a sensible if imperfect choice too.

The third and lesser reason is this is old school mechanical no frill shutter land and is an enjoyable enough experience.

But the problem is that you can pick up a more able Nikkormat FTn for the same money. Granted that’ll probably be needing serviced but its a beautiful piece of machinary

But the lens….mmmm hhhhmmm. I’ll be back with some film examples.

As mentioned both Mike Eckman and lensbeam have reviewed this camera as has Alex Luyckx. Kosmo Foto carry a handy review of the Kiev 19M for comparison. Sovietcams as ever are a great starting point for information on this (as well as other soviet cameras). The wonderful Mike Butkus has the english manual for the 19M on his site but only the Spanish version for the 19.