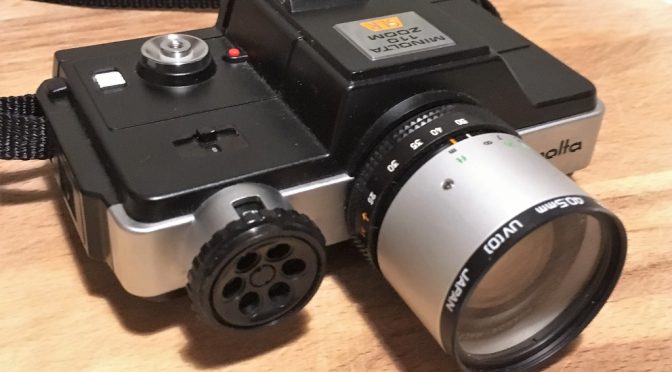 This is probably the weirdest camera I own. I wasn’t too sure if I if I should provide a breath sample with it or take photos. Welcome to the Minolta Zoom 110 SLR. Not only is it one of the weirdest looking in the world. But it’s also a fully functioning SLR that takes 110 film and arguably if not a bridge camera then sets the path for them.

Whilst the vast bulk of 110 cameras came in the instamatic style, there are a few that buck the trend. There’s quite a lot of toy/novelty ones like the Halina Micro 110 but there’s also a few quite very high end ones like this.

Minolta had a good track record for both 110 and 16mm
film , producing above average cameras like its autopak series (I’ve reviewed the 430EX & 460T before). They are good cameras for the format but this takes things to another level

What Minolta produced was a non interchangeable zoom lensed SLR for the 110 format. It is a proto-bridge camera, it lacks just the autofocus that later cameras like the Chinon Genesis had. Weirdly minolta had almost the same with the 16mm format in 1968 but the 16 Electro Zoom-X never made it into commercial production

The 110 Zoom SLR is pretty highly speced for the size with AP, EV compensation and Bulb and Flash modes (supported standrd flash units. Just a shame about the styling !

It is unlike any camera I’ve ever held. It really looks like a Breathalyzer or something from a Roger Corman Sci-Fi epic. You need to hold it a bit like a pair of binoculars and the blokes in Minolta’s ergonomic department must have been out for lunch. So 80’s bridge cameras are similar but their controls are more logically laid out. The aperture adjust sits on the end of the stalk that house the metering system (no TTL here nor any viewfinder info beyound a under or over exposure warning LEDs) The focus and zoom are conventional affairs.

Okay but what’s under the hood ?

Quite a spec for a 110 camera. The lens is no mean feat for 1970’s engineering (this long before zoom compacts). It also holds it’s aperture across the x2 zoom. The obvious compromise is the non TTL metering and that only AP exposure is supported.

The camera support the notch cartridge system for 110 film but the ability to EV compensate is a boon (some modern 110 film is 200 ISO ~ a stop between the traditional low and fast ~80 ISO & 400 ISO films of the day.)

So how does it handle ?

I’d love to say this was dawdle to use but it isn’t. The ergonomics are all wrong and there’s scan detail in the viewfinder. On the plus the focusing system works well but I’d prefer a split microprism and a fair number of my shots were soft. The viewfinder is a tad on the dark size but reasonable size given the format

The ability to focus down under a foot is a boon with the macro feature.

Does it shoot okay ?

As with any 110 finding a lab who actually can do a good job of process and scanning the film is key (shout to digital photolab carlisle here for this film). The dots you see on a few shots are a fault with lomography backing papers.

Exposure wise the shots are on the ball in simple lighting. You miss centre weight or spot metering you’d get with a TTL system. Hence I found some shots the foreground was underexposed if the background was brighter. This is more compact metering you’re working with but at least you can compensate

As to the image optically. Well it’s 110 so even with a good lab it will be grainy but not awful (the footprint of 110 film is about 1/4 the of a 35mm frame. The means any mistake in focus sharpness will be less forgiving too but this a good 110. It is pretty sharp when on the ball and the ability to keep your aperture at f/8 or smaller helps (this was never gonna be a bokeh beast with a f/4.5 widest aperture). However I struggled with the focusing screen and a few shots looked no better than a good non-SLR 110 camera

It isn’t in the league of a full frame SLR but when good I got images that I would have been happy with from a joe average late 80’s zoom 35mm compact (okay a bit more grainy). Sharpness was consistent across the image when I managed to get things on the ball.

At the 50mm end there a smidgen of pincushion distortion and at the 25mm end I was struggling to be certain but I think there was some barrel distortion. Vignetting was minimal.

So not bad at all. This really is a cut above even the better optic viewfinder 110 camera. However before you rush it does has have it’s rivals…..

So are there alternatives ?

On launch in ’76 it held the market to itself and sold quite well but in 1979 that changed.

First up was its own revised self. The mark II was launched but this time in a more conventional and finger friendly shape. It also packs TTL center-weighted metering and a marginally faster f/3.5 lens. It also has built in diopter correction.

Much more tichy and practical, However Minolta had a challenger

Pentax unlike Minolta until 1979 never made anything but SLR format camera until the 1980’s. And their 110 camera was no expception. It also is the smallest and best known commercial subminature SLR ever made – The Pentax 110 Auto.

Despite it’s tiny size this was a an interchangeable lens camera that came with a bonkers array of accessories. However some sacrifices were made. The camera is fully automatic with the aperture sitting on the camera body. The flash is non standard. The later 110 Auto super added in backlight compensation plus a few more refinements

So I should Just ignore the original Minolta ?

Yup it’s bigger by some margin than both the Pentax and the later Minolta but it is way cheaper to buy. Expect to pay under £20 for it and etting for around a tenner is not unheard of. The Mark II steers north of that as does the pentax.

It also offers more exposure control than the pentax. But…

Is there something better I should spend my money on ?

It isn’t that compact and in fact you can pick up a low priced 35mm SLR with lens like a Pentax P30 series with lens for the same money which uses 35mm film which works out cheaper in running costs and has better optics choices. It also isn’t a quick to shoot 110 camera for P&S.

However this is a relativelt cheap route into higher end 110 photography. There are more easy to live with cameras but they cost more and you need to weight up the spec.

Mike Butkus has the manual on his site. For alternative reviews see the ones at photothinking, tinkeringwithcameras (this also covers the Mark II) and Jim Grey covered it on Down the Road.