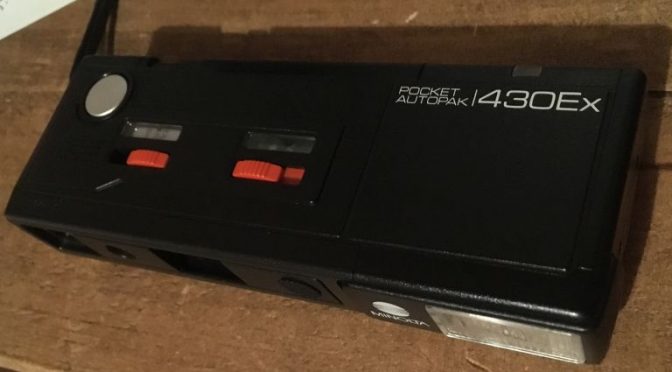 In the last year or 2,  I’ve shot a lot of 110 cameras. They have tended though to fall into 3 camps – modern toy shooters with plastic lenses for the lomo crowd, simple 70’s cameras with that classic minox 110 shape or the bonkers high end SLR & rangefinders. The 430E & 430Ex sit in that middle group but with some high end features that raise them above the average.

Minolta was no stranger to subminiature  cameras. Their Minolta-16 series  which started in the late 1950’s was a dominant player in the pre 110 subminiature market. The autopak 400 series of minox like cameras with built in flash ran from the 430E to the high end 470. 430EX is essentially a improved version of the 1976 430E (the differences are helpful but marginal an audible alarm in low light and a lit up focus switch when flash activated). They both have the same 3 element 28mm 1:5.6 lens which has 3 zone focus settings.

Now that might sound wide to you but actually it’s quite a narrow angle of view for a P&S camera  –  it is the equivalent of a 55-60mm lens on a 35mm camera.

I was unsure if there was any metering. However Sylvain Halgand helpfully specs this as a fixed exposure camera. This means you have a camera locked at f/5.6 with a 1/200 shutter.  A fixed exposure might seem basic but was pretty typical for the era. What is slight unusual is the faster shutter setting and wider apertures than fixed focus rivals that might have used f/8-11 and 1/60-1/100  to maximise Depth of Field. This is because the 430 is focusable. You’ve 3 distances (1.5, 3 and 10+ metres) to set by a toggle switch on the top plate but there is no information given in the simple viewfinder which is a pity. That viewfinder is most accurate about 3-5m with center point drifting either side of that.

Mines came in street shooter all black plastic (a silver and black version was also made) and is well put together. There is a sliding cover for the lens that also locks the shutter. In low light a red LED pops up in the viewfinder and an audible alarm sounds (430 Ex only). You manually turn on flash on the top  using a slider which causes it to pop out and charge. This and the low light circuit LED are powered by a single AA battery. Focus and flash distances are on the bottom and the camera can sense the 110 tab to determine if slower or faster film.

The optics are a cut above the likes of cheap rivals and it shows. I’ve learned with 110 that the lab you use can make all the difference and the Minolta is no exception (i guess thats why a lot of 110 enthusiast like to DIY). But no matter what lab you use there appears to be a palpable difference between this camera and it’s more basic brethren.

The result are acceptable to  good in the near and mid range if the exposure is good if you are pretty near the zone points. The image is a wee bit soft if between  and this is worse on the long shots or when your exposure is off but actually not that bad and  better than the legions of cheap 110 flashcams. Occasional you get shots of brilliance that  you’d struggle to know that you’re looking at a 110 P&S image not a 35mm . There is no vignetting, minimal pincusion distortion and the focus isn’t bad across the film plane. I think if they’d gone for a stop smaller with the aperture this would have been a killer camera but then again it was produced in the days when 100 ISO films were king.

The ‘x’ features are worthy (audible bleep &  the lit up focus gauge) and are genuinely useful, That said either 430 is a fine enough basic 110 camera with a retro feel. The flash pops out when the toggle switch moves over and this means less red eye effect. A simple LED tells you when the flash is ready.

However you might just want to pause before buying one when you consider it was the baby of the series. Minolta made other 7 models in the series (n.b.– they also did a other 110 autopak camera series but batteries can be trickier)

I’ve just acquired the dual lensed scale focus 460T and will post in due course.