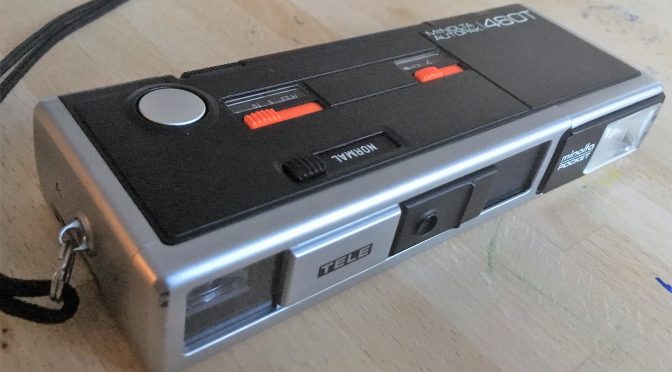 If you read my 430EX review, you’ll know I’m reasonably impressed with Minolta’s take on point and shoot 110 cameras although there are some faults. Here’s its bigger twin lensed brother the 1979  460T. How did it fare ?

Whilst the 460T is unique in the series with a twin lens but not so unique in the world of minox style 110 cameras. That said the Minolta uses pretty quality Rokkor glass (Sylvain Halgand describes the configuration of the lenses as 4 or 3 elements). As with other models in the series a Deluxe 460TX exists adding a audible low light warning and illuminated dials (genuinely  helpful but other than that the same camera)

Focus is a slide for scale rather than Zone focus. Once again the Shutter is locked at 1/200. However you have 3 aperture settings. These  are marked with weather pictograms sunny (f/8 (n):f/13.2 (t)), cloudy (f/3.5(n):F/4.2(t)) or Flash. The flash is manually triggered and it and the low light circuit are power by a single AA battery. The camera auto adjust aperture in Flash mode to match focus. The metering system can delinate the old 400 ISO films too.

A spartan but practical viewfinder just features  parallax error marks and the low light/flash LED. Switching lenses switches the viewfinder neatly to match the zoom. There is no in viewfinder focus scale unlike the 450E/450EX . Nor despite what you will read elsewhere is there a cable or tripod point.

Some of the issues I had with the 430EX remain here. Again the normal (wide) angle of 28mm isn’t really that handy  (about the same as a 55mm in 35mm terms). That said most twin lens 110 camera of the era seem to have a similar set up.  Equally I’d have quite happily sacrificed a shutter speed to 1/100 to tighten the aperture especially at wide settings.

Like the the 430EX, optically at close & median distances things work well enough and actually the shots match some respected 35mm compacts if you get processed in a good lab who know how to handle 110. With the lens set at normal the 460T is a bit of a let down for distance shots like the 430EX. However the tele setting copes much better.  Flash shots seem well enough balanced by compact standards and with little red eye. Given the package size some distortion is evident mainly radial barrel.

The 460T is one of several simple but good 110 camera that Minolta made. In essence very similar to the 430E but with the advantage of scale focus, another aperture setting and a tele mode. And unbelievably this camera gives good results in the close to median distance. Afine choice for  basic flash 110 but worth getting the 460TX version