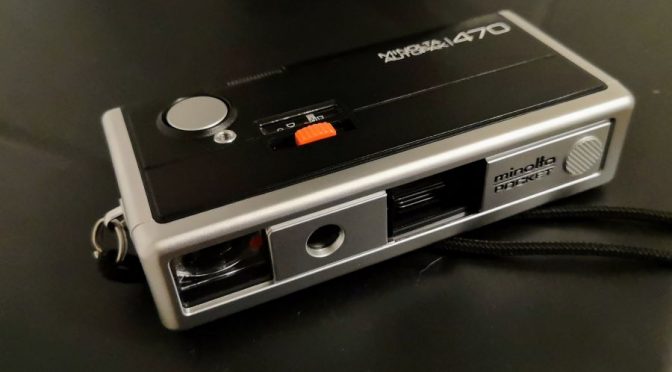 So I must admit i’m a bit of a fan of Minolta’s 110 cameras. If you’ve followed this blog you’ll know I highly rate some of the models in the Pocket Autopak 400 series pretty highly for this class.

So when I got my hands on the top dog of the class I was pretty excited. But it didn’t quite live up to the hype.

Minolta were in a good place for the 110 format. they’d been making 16mm compact cameras for years before the folk at Rochester NY dreamed up 110 in 1972. So it was an easy transition for the company.

Minolta didn’t go for the entry level market and when for the mid and high end users with focus-able compacts and their mythic Zoom SLRs. I’ll leave you to debate such logic for the format which suffered from variable often crap lab processing and print making.

Of their mid range compacts the Pocket Autopak 400 series is probably to most accessible using batteries that are still easily available. The models are outlined in my post on the 430EX, the entry level camera of the series.

The 470 is the top dog on paper of the series. It features a 26mm 1:3.5 Rokkor 4 element lens purportedly in Tessar construction. An addition close up lens adds to the existing 5 focus zones. CdS metering is tied to an electronically controlled shutter with speeds from 2-1/1000.

Unlike the other models in the series, this has a detachable flash unit. It also has standard cable tripod points. Power is by 2xSR44 for the camera and the flash takes an AA. The camera has notch sensing to separate lower speed 80-100 ISO from 400 ISO. However given the only in production 110 films are 200 ISO this is a moot point.

This is a well finished machine. The camera only seems to come in silver and black as shown here but is incredibly well thought out. The detachable flash uses as standard hot shoe so in theory you could use any old flash unit although metering is eared for the built in one.

The camera’s unintended potential weakpoint sits in front of the flash mount. As with many cameras from the 1970’s, left leaky batteries are a potential issue. So make sure the battery compartment for the 2xSR44 type batteries is clean. A battery check button sits on the other side with a red LED in viewfinder (this also comes on in too low light)

The a slider protects the lens and turns off the metering. It also serves to move the extra close up lens out of the way if you forget. That lens allows you to focus at 0.5m (1.6ft) although I can’t say that adds much to a camera that without can go to 0.9m (3ft). There’s an easily missed warning arrow in viewfinder

The flash likewise has a range chart printed on it. Worth noting the camera syncs at 1/100 and you’ll need a AA battery to power. iT has a manual switch on rear and a locking tab that needs to released when taking off.

The exposure system on the whole is okay but struggles with backlit scenes as many area metering cameras do. But unlike many 1970’s 35mm compacts, you can’t adjust the ISO to compensate.

The same could be same of the optics. Once again the 26mm lens in this format is not that wide (about equivalent to a 52mm in 135 format). There’s a smidge of barrel distortion but not bad and yes this is the best of the 3 for long shots. But Shorter/medium distance shots can be a tad inconsistent when the light fades

The problem is the camera seems to widen aperture to preserve shutter speed. So if you shoot lomography film is the camera asssumes it’s 80 ISO, so in anything below brilliant sunlight the aperture is going wide to keep the speed above 1/100. This gives rise to many shots having quite shallow depth of field. meaning some objects can be really sharp but within a metre or 2 things soften rapidly.

This negates the optical advantage over it’s lesser brethern.

This is a wonderfully engineered 110 camera and is the smallest in its series thanks to the detachable flash. It on paper is optically better and features proper exposure. And yes it is better than the lesser models in the same series esp on the long shots.

But with slower film the poor DoF makes this a hard camera to guess focus especially at nearer distances loosing the advantage. Nor can you compensate for backlight.

I just doesn’t keep up with Voigtländer Vitoret 110 or Rollei A110. These are even smaller and in the case of the Vitoret much simpler.

Jim Grey’s great review of this camera pretty much acts as the manual online and is worth checking out. Jim wasn’t a fan either. For a more positive take check out the one ten guy’s 2 part review. Pacific Rim Camera has copies of Minolta Dealer guides (part 8 of the 1981 one covers 110 cameras)