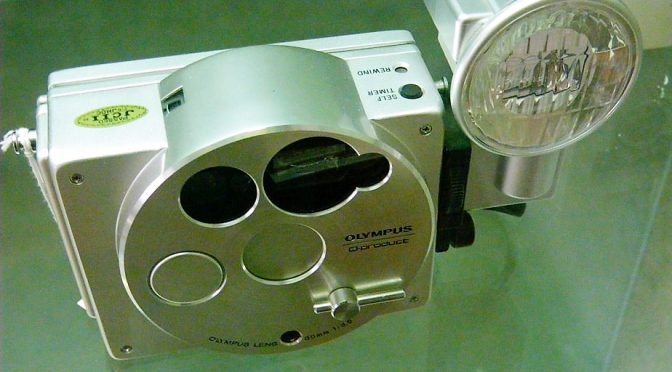 As the decades of photography have advanced most cameras conform to a standard look for their time. But many revolutionary cameras have turned up (and often left). Here’s seven and feel free to add any more in the comments.

Looking like a starship from a Roger Corman movie the 110 Zooom arrived on earth in 1976. Despite it’s looks it is what the name says. This is a proper manual focus SLR camera for 110 film with a 25-50mm 1:4.5 zoom lens. It is a proto-bridge camera and is quite feature laden for it size with EV compensation with filter and cable screw points. The camera is shot in aperture priority.

Shame it’s not the easiest thing to hold. Within a few year it was replace by the dull named 110 Zoom SLR Mark II which is a more conventional looking SLR shape. Interestingly in the early days of full bridge cameras some like the Ricoh Mirai (aka Olympus AZ-4) looked more like the original 110 Zoom.

I’ve done a 1 roll review on this camera.

Britain post WWII wasn’t the brightest of places. Post war austerity, rationing and rebuilding still held sway. IBut there was a public desire for a brighter, bolder future. The President of the board of trade came up with the idea of a public exhibition where British companies would show case their best new bold and futuristic designs

British camera maker Ensign responded by taking 2 new models. I say new but neither were. One was the Ensign Commando which was a nicely made folding rangefinder which had been military issue until then. The other was the Ful-Vue

The original Ful-Vue was actually launched just before the war. It was a Box camera that had massive pseudo TLR style mirrored bright viewfinder. The camera uses plated metal rate than mirrored glass. This was redesigned into the cute looking miner helmet styled camera shown in 1946.

But it’s still a simple box camera with fixed focus (bar a pull out close up setting), no aperture control and a choice of a shutter speed or bulb type setting making a 1902 Brownie No2 more flexible. Later models added flash sync and zone focus.

This series of bridge cameras was notable for many things. However its most striking feature is the body shape. This not classical Yashica stuff. By this point Yashica was owned by Kyocera and represent the twilight days of the brand. A period best associated with several reasonable but not earth shattering AF compacts and the on-going Yashica SLRs.

The weird body was inspired by the popularity of the new style compact camcorders that were starting to appear using smaller formats like VHS-C. It is intended to be held one handed.

The other USP was the cameras shot half frame making them a thrifty choice. The series actually was reasonably successful in part due to the name and optics. The samurai name and styling was used later but pointlessly on the Yashica Samurai 4000iX a zoom APS viewfinder compact in 1997.

Canon pre AF had an interesting relationship to 35mm compacts. It really didn’t make anything full frame that wasn’t a rangefinder or a SLR. It did however make half frame compacts. Most were conventional but not the Dial

Very futuristically styled this is also quite advanced. The camera’s viewfinder shows both focusing information and aperture. The camera is used in shutter priority mode (with full manual override for flash). The odd cyclops appearance isn’t due to a selenium cell but a series of increasingly opaque lens you move over the CdS meter.The film advance is clockwork powered.

It was successful enought to see both a sucessor model and rapid variant.

Probably the only camera on the list that could get you killed, the Doryu was on attempt at securing a lucrative contract with Japanese Police. Weirdly they’d specified a pistol shaped camera for police work (the contract was won by Mamiya pistol – yup that is literally its name !). The Japanese seemed to have thing for gun shaped cameras with most prominent being the Rokuohsha (Konishiroku) Type 89, a machine gun like camera made for training air crew !

The Doryu was launched commercially but wasn’t a huge success. It is a bonkers camera that shoots 16mm film. The camera has a magazine that you would load with with magnesium cartridges for flash. If you’d been canny enough to snap one up, they now sell for five figure sums (USD) !

Olympus were no stranger to novel design and sometimes it led to great things like the XA or the mju series. These also released some limited edition but effectively concept cameras like the O-Product.

Designed by Naoki Sakai this was a radical yet retro departure from contemporary camera design. And that’s saying something for the decade that gave use the likes of the Cosina CX2 and its Soviet copy the LC-A. Wonderfully tooled from solid aluminium this a a fascinating camera. The detachable flash makes it look like a vintage press camera in miniature.

Sadly the underpinnings don’t match the exterior. In truth this is just a re-bodied Olympus AF-10 a competent but budget market AF P&S. So you’ve a narrow shutter range and only 4 supported DX ISO speeds. It works as well as any budget compact from the late 80’s but lack the killer edge of the classic 90’s compacts like the MJU-1 & II

Naoki and Olympus would partner again to give rise to similar Olympus Écru in 1991. The O-product commands elite level compact prices where as you can pick up a AF-10 for less than a tenner

We tend to think of the smartphone being one of the first multi function devices but back in the early 1980’s Hendren Enterprises of Kentucky, USA came up with device basically combining a radio alarm clock and a camera. The Octopus name probably comes from the 8 uses (radio, alarm, camera, clock, stopwatch, flash light, storage compartment and dual time). The camera is a basic 110 exercise.

This pretty much cornered a market that nobody wanted and so is rarely seen.

10 thoughts on “What On Earth ? – Seven strange Cameras”