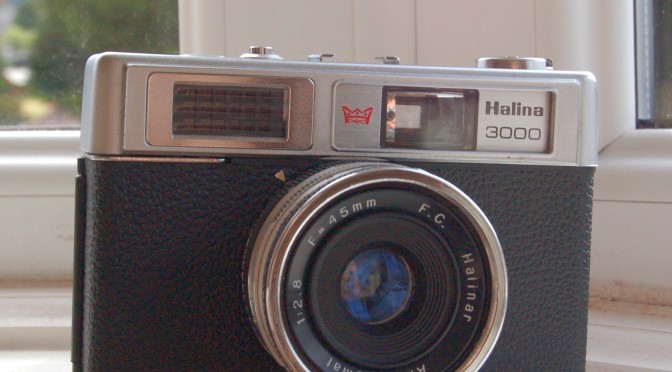 The Halina 3000 and it’s unmetered siblings the 1000 and 2000 have the gorgeous retro  silver and black look that is so en vogue at the moment in modern camera styling. Oddly their underpinnings are actually more 60’s rather than 70’s when they were sold. But is it any good ?

At the time they were relatively low end even by Haking’s standards. Hong Kong based Haking was already selling much more advanced compacts like the Halina 500 & 35-600.  The Halina 3000 actually owes its origin to the Halina Paulette series from the 60’s (the word ‘owe’ is a bit disingenuous, it’s basically the same camera but in a updated body and a slightly worse lens)

That body is pretty much all plastic  except for the lens barrel.  My suspicion is that that the anastigmat lens  dates back even further than the Paulette series possibly back to the Halina 35X. Whatever the origin of the lens the 3000 shares the Paulette’s shutter and aperture setting. The 2000 is essentially the same camera but without the metering system. Both are slightly larger than an Olympus Trip 35.

The camera has a battery free selenium metering system. Unlike more advanced cameras like the Olympus Trip 35, this doesn’t control the exposure automatically and simply gives you a reading which you use to set the camera manually (aka uncoupled). The needle meter on top of the camera gives a Light Value (LV) reading (in essence a EV at 100asa reading).  On the lens barrel between the aperture and shutter speed setting there is a LV window. To set the exposure you simple move the aperture and shutter speed settings until you get the metered LV value in this window (a slide on the bottom of lens allows you to adjust for film speeds).

This simple system was pretty common with uncoupled metered cameras in the 1950’s to 60’s.  It allows the user to make a choice on settings (e.g. choose a faster shutter speed but wider aperture or shoot at slower speed with smaller aperture and more depth of field) and easily adjust the setting to  deliberately over or under-expose.  However compared to coupled automatic exposure cameras you do need to set the camera up. The metering is as accurate as my hand held meter.

The Halina’s actual setting  only cover up to a maximum EV 16 at 100asa, This falls just short of my magical EV17 (although the meter actually exceeds this). However you can still use 400asa film in bright sunlight by using a neutral density or other filter. The camera has a a 49mm filter ring and as the metering is not mounted on the lens you can artificially slow down the speed of you film with filters. I use a 49 to 52mm stepping ring as I have a load of 52mm filters and use a K2 yellow for B&W. This not only allows me to improve contrast but shoot film one stop slower (e.g. 400asa shoots at 200asa).

Flash-wise this camera will sync at any speed and in it’s only notable refinement over the Paulette series  both PC and hotshoe sync are supported.

The lens is a mixed bag. At the few meters especially with a small aperture it’s fine although its’s softer and less contrasty compared to more better known P&S and even its own siblings like the Halina 35-600. At a distance the astigmatic lens set up is apparent. Focus is not equal with blurring seen at the corners. If you get one I’d do some testshots for distance. I find if I push the focus ring tight round to infinity especially at lower apertures things get a bit blurry even in the centre.  Things are better with focus set between 30ft and before infinity. My Paulette electric is worse with everything going out of focus when set focus beyond 30ft.  However the Paulette is much better overall with lens blurring at the edge IMHO

Do I like the camera or not ? Well if I was reviewing at the time I’d say stay clear as outdated and outgunned. However for a retro point and shooter in this day and ages it has a lot to offer with a good range of manual controls, metering and en vogue styling. It’s real weakness is the lens at distance and the uncoupled metering won’t be for all nor will the effect exposure max at EV16 (100asa).

Unsurprisingly for  Haking, it was sold it in other clothes as the Opticam 3000 and Weist 135. The Halina Paulette EE II is a all black version which at least acknowledges it’s heritage (this was also sold as Prinz Mastermatic V).

As I’ve already mentioned the Halina 2000 is essentially the same camera but without metering. The Halina 1000 although sharing some body styling is a totally different camera with a plastic fixed focus lens. It has a single shutter speed.

The 3000 is available on Ebay fairly widely for £10 or less although the 3000 seem more available than 2000. Watch out for dead meters. As selenium powered you should get with the original soft case (Not a camera to wind on after a shot and put back in case as you’ll probably fire the shutter doing so). The Paulette sells for around the same and things might come to style and that lens.