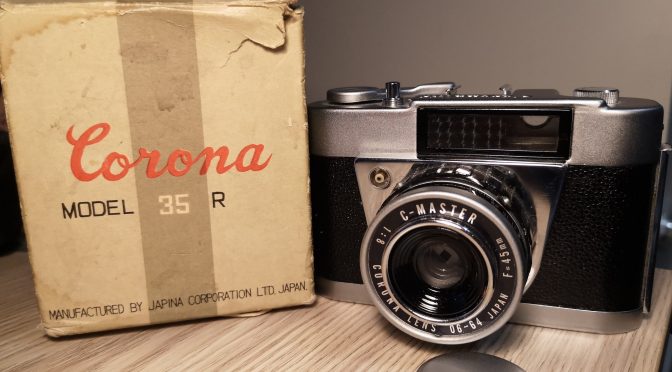 Possibly but accidentally the worse camera to wield at the moment landed in lap a few months ago. When the Corona 35r was launched, the term Coronavirus wasn’t even know even in the more benign common cold virus form. But is the 35r to be sniffed at or wrapped in a hankie and binned ?

In 1965 Tyrrell and Bynoe first identified one of common cold viruses, which they labelled B814. It would be a few years later B814 and other viruses picked up the Coronavirus tag due to them having crown like surface projections. And if I wrote this post in 2019, I’d be calling this the common cold camera. But in 2021 it doesn’t feel fair to use humour.

The Japanese maker of the 35r would have had no concept of the fear the word Corona could instil in 2020 and beyond. To them Corona was name that had a royal or solar connections. Much in the same way Grupo Modelo thought Corona was the best name for their Pilsner beer back in 1925.

But who actually made it ?

Little exists online about this camera. Peggy Marsh’s excellent review of it on camera go camera a few weeks ago is perhaps now the most thorough source available.

Amongst her limited sources for references is the UK museum Science Group collection where this camera is in the collection. The Museum group like most others describe it as made in 1955 by KSK in Japan.

Trouble is I think that’s wrong.

KSK and Corona – sounds good but no

It’s a plausible story. KSK is not really a company but a frequently used branding on a range of cheap cameras made in the post war decades in Japan by a few different manufacturers.

And indeed 3 cameras bearing the KSK logo and the name Corona. These were 3 subminature Hit Camera models made by at least 2 makes in the 1940’s and 50’s.

But the Corona 35r does not carry any KSK mark. In fact mines came with most of the original carton which indicates it was made by the Japina Corporation Ltd, Japan. This is a company not my knowledge associated with using the KSK name. In fact I struggled to find anything on this company. The only reference to a Japina Corporation Ltd was a Hong Kong base company launched in 1964 and folded in 1968.

Now that is tantalising as this camera is not actually marked made in Japan. The only mention of Japan is on the lens bezel. Hmm Japan lens on a Bezel often means a Chinese or HK made camera.

But That’s a conjecture as we’ll see below it is similar to a more famous Japanese made toy camera.

The styling is more like a late 50’s early 60’s German viewfinder like my Kodak Retinette 1A. In fact the 35r has a more advanced winder than the much more advanced kodak.

Although it cosmetically differs, the 35r shares may features with the Meikai EL series cameras which were launched in 1963 by Togodo including the faux selenium meter. The Meikai feels a little more upmarket and modern which makes me think the 35r hails from maybe a few years before.

What we have a basic 35mm viewfinder with fixed focus. Its C-Master 45mm 1:8 lens looks simple and uncoated. You have 2 slider on the barrel. One adjusts aperture between f/8 and f/22. Yu have a choice of Bulb (B) or instantaneous (I or aka normal to you and I ). The I setting is unknown but my guess is that this is between 1/25-1/50.

The film plane is curved – a typical solution to improve focus on cheap cameras. It has quite endearing embossed metal lens cap

There is no filter thread but push on filters may be possible. You do get a off centre tripod point but no cable point or timer. Advance is by a reasonable winder and the camera has a PC sync socket and cold shoe for flash. The sync speed is not known and I didn’t test with a flash unit to see if X-sync.

It’s nicely looking combo of metal and plastic. It may be cheap but but it looks the part. The winder doesn’t cock the per se. But rotating the sprocket above the film mask does. However this can get iffy unlike some cameras.

The Corona 35r in Use

Loading is easy enough. There’s a pull up lever on the side which lets you access the film compartment There is a slot on the take up drum. You need manual set the shutter count dial buy a small wheel on the rear of the top plate. it counts up. My dial didn’t lock so easily was nudged, making it useless,

Rewind is by depressing a small button marked R on rear and lifing slightly the rewind knob. There is no lever off the knob so it can take some time but works well enough.

Let’s be frank not great. I’m pretty certain it has a slow shutter speed as it was prone to shake.

Vignetting is notable on narrow apertures. Fringing is evident.

On the non shaky shots this pretty soft stuff. The lens is maybe most optimal at around 3-5 m centrally but even then it’s soft and it falls off either side . Move from the centre and it degrades and softens more. It is way to soft when shot wide but slight improves as you shoot with a narrower aperture

You do get a bit of pincushion radial distortion but at least not awfully so for this sort of camera.

Really this is one of the worst optical quality non plastic lensed analogue cameras I’ve used. It’s about as good as a run of the mill disposable, not a good one nor the Dubblefilm clones you can buy. I suppose there might be some lo-fi appeal to some with the vignette and soft images but I’ll pass.

It doesn’t flare well either

Final Thoughts on the Corona 35r

On a plus point bar the lens this is actually well enough made for a cheap camera with the exception of the lens which isn’t great and a slow shutter speed. If you want a quirky alternative to the current crop of camera film maker plastic cameras I guess this is an option but bear in mind the likes of the Dubblefilm will actually take better shots.

The lens is awful and whilst there may be some lomo/toy camera appeal to some. It really didn’t float my boat, You can get better from plastic models with more character IMHO.

If you are going for the toy/lo-fi aesthetic then the obvious successor to this is one of the legion of the Color Optical Lens cameras that were sold from the the 1970’s into the 1990’s with a very similar spec and a crap but endearing lens. Better example include the legendary Time and Barclaycard Visa Promo cams. But there’s also the scameras like the infamous Mintax, Olympia and Cannon cameras as well as the likes of my Tamashi QP800. I quite enjoyed the latter.

The Halina 1000 and it’s variants also have similar spec but produce better images with a plastic lens. As does the VUWS and its clones which offer no controls at all.

As I’ve mentioned any of the numerous current Dubblefilm Show Clones are worth of a look despite also having no controls but a flash.If you can live with 120 fil the Agfa Click series proves a curved focal plane should be no reason for poor image quality.