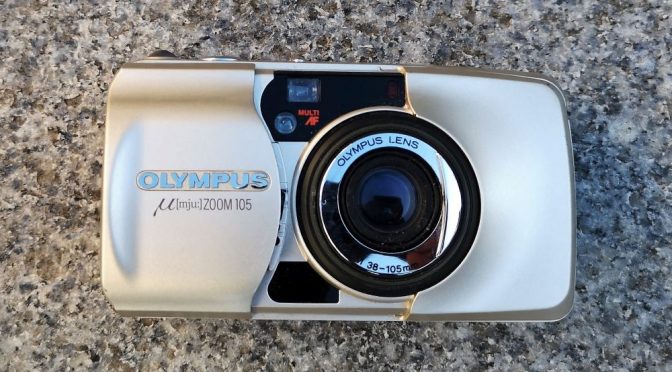 Car boots are often is bit hit and miss for the cheap camera hunter. I’ve scored some great wee finds over the years from my £3 XA, a K1000 for a £5 that I sold on to my mint £2 Espio 120SW. But at times you find nothing but the odd instamatic and true tat. The bank holiday weekend on in Dumfries however flung up a grubby mju zoom 105(aka ∞ Stylus Zoom 105) for two quid that literally worked for one roll and then died.

Was it £2 quid well spent despite this ?

If you’re not from the UK or Europe, Car Boots are organised events where people can turn up and sell usually unwanted stuff. In the past this was literally from the boot of their cars (hence the name). Nowadays folk usually put their wares out on folding tables. You mainly get folk clearing stuff out but you do get the odd more professional seller.

It’s a good hunting ground for film cameras as folk are often clearing out unwanted clutter and are not looking for that much (hence the K1000 for a fiver) but equally there can be nothing you’d really want. It’s buy as you see and there no return option. Most folk are not looking for that much but you’ll get the odd more pro seller who has a modicum of knowledge and also folk who haven’t a clue and just are looking for stupid money (once had a student trying to sell me a Nikon F55 with a fungus’d stock lens for £80).

But if you find a good camera even if its a bit grubby it’s worth the gamble of a couple of quid. This is where our mju comes in

Olympus at the Crossroads

At the end of the 80’s Olympus was at somewhat of a cross roads. Whilst it had made some dependable AF compacts across the 80’s and even some highly innovative models in it’s AZ zoom series like the behemoth AZ-300, it compact crown had been arguably stolen by the likes of Pentax and Canon

The fightback began in 1990. Olympus ended up having 3 main AF product lines. In addition to the mju series there were the bridge camera IS series which are highly regarded but incredibly cheap to buy. The more budget  minded Accura/Superzoom/OZ series was bulkier and had some good models (and some turkeys)

But the company’s mju series has become the stuff of legends. Most focus these days is on the mju prime lens model. The later mju II is seen one of the elite compacts can and command prices three figure prices. The original mju prime camera was seen as a modern classic although mercifully you can get them for £20-30 which is just as well as they aren’t the most reliable IMHO.

But in the 90’s these were the cheap cousins of the mju series zoom cameras. These still have a cache especially mju-V seen as the flasgship model. But they’re still cheaper than a mju-II !

I’ve owned a few notably the mju -1 but also a mju-II 80 zoom (too small for my hands and lens barrel had a light leak but lovely). So a grubby mju 105 for £2 was an easy sell

The mju Zoom 105 is 38-105mm 1:4.5-8.9 AF zoom 35mm compact. The lens has 6 ED glass elements (one aspherical) in 5 groups and has a focal range from 60cm to infinity. The active AF focus system boasts 860 focusing steps. Most AF compacts do not focus to pin point precision. In fact they’re essentially zone focus with the camera focusing the lens to the nearest zone aka step. Some early AF compacts actually only had 3 or 4 steps and at the time of launch it would be easy to buy a AF compact that had little more than that.

A Deluxe (DLX) version offered data back features (I believe it goes up to 2030). There’s an optional remote which is often described for the DLX but its icon pops up in my standard versions LCD.

It’s a reasonably well build camera. The lens is protected by a sliding cover which also acts as the on/off switch. Mines has a few cracks in the edges of the door suggesting at some point it’s been completely slid off (a not uncommon issue). This would be the downfall of the camera.

Available in black and champage gold I sadly got the latter. The camera is quite stylish however. I really like the fact the edge of the lens bezel is visible when closed. It is compact but much bigger than the series 2 mju zooms. However the bigger size suits most hands and it is still pocket-able.

All operating controls are on your right hand’s side when using. The LCD sits in the centre of the top plate with the remote/Self timer & Flash option buttons. Beside those are the shutter button (focus lock possible) and then a zoom toggle. The LCD is clear but simple showing shot count battery ststus, flash mode and timer if engaged.

The dioptre adjustable viewfinder has parallax error lines and cross hair for focusing. There no other info in it but focus and flash status LCDs are just to its right.

The flash auto pops up when turned on whether needed or not. It will regress into the body when turned off. The camera is described as weather proof but not watertight. The lens shows numbers for focal length.  Whilst you can use one-handed the camera feels oddly unbalanced with the left side pulling things down. Shame as it’s quite comfy to hold with a thumb grip

This actually has a quite noisey and slow zoom for a mid 90’s camera. Focusing is however quick. There is neither dedicated scene modes nor any backlight compensation. The remote/timer button only turns on and off those options simultaneously. The flash button cycles between  Auto (default), Auto-S (red-eye), off, fill in and night scene mode.

Focus lock was generally quick enough. The camera isn’t the quietest winding on however

Death of a Camera

I was cruising with this. Hit the end of the roll and the camera lens retracted and rewound. I slid the cover over and switched over to roll of XP2. Then the weird noise started. The lens wouldn’t protrude when I moved the lens open.

I tried a few times but then a spring appeared on the lens side of the sliding cover. the cover was jammed on. My 2 quid mju was no more 🙁

1 roll isn’t really enough to full push a 35mm camera especially when using a slower film. Still the results were not bad.

Overall this is a reasonably good lens and shots are generally sharp even with 100ISO film in early morning light. There’s a bit of weird trade off with the tele is better at adistance it seems which is not ideal. The Devorgilla Bridge shot is one of the better wide ones. It’s acceptable but a little soift and lacking contrast and there’s some fringing going on. To be fare it’s not bad for a early 90’s zoom but not class leading.

Meanwhile this shot of the 27m Dumfries Midsteeple on the tele end shows up pretty good detail. Both are fairly good from the limited shots I took that were close than 5m although I think the wide slips ahead. Exposure was pretty good in all bar 1 shot I took.

I didn’t get a chance to do a controlled aberration shot. I’ve mentioned the fringing already but there’s minimal radial distortions on the 1 roll I shot. Perhaps a tad of pincushion on wide

This isn’t a bad little compact for it’s time but it is no class leader. The tele is weirdly better in long shots than the wide. Exposure is good but there no exposure compensation. There’s no infinity mood and the balance is a little whack too. But you do get a diopter adjustable viewfinder and an optional remote control.

Its’ a good effort but it fails the is it as good or better than the Pentax Espio AF Zoom test. It’s telling that the fixed focus Olympus PEN EE-2 of the car boot at the top is much sharper (although light was better and I’m using 400 ISO film).

The mju is also yet another Olympus post 1980’s camera that proved unreliable. Maybe I got a bad ‘un but I’ve been a tad unlucky with these mju series cameras.

I’d always have a look at the models from the Pentax Espio/IQ Zoom series and the Canon Sure Shot/Prima/Autoboy series. Pentax kinda invented the Zoom AF compact and they mastered the concept well. The Espio models (1992 on) have some brilliant zoom compacts as well as some clangers. The 1992 Espio AF Zoom is one of their finer cameras and the later more compact Espio105SW & Espio 120SW are worthy a look. Canon like wise produced some fantastic models like the Sure Shot Classic 120 and the dependable Sure Shot 60 .

Later mju zoom cameras are worth a look. My mju II 80 was much sharper overalll, It may be too small for some hands and the shorter X2 zoom is an issue. It also suffered from lens barrel light leaks !

If you want more reliable (and repairable) Olympus P&S you could do worse than the PEN EE-2 which oozes vintage chic.

The manual can style be downloaded from Olympus USA. Peggy Marsh at Camera Go Camera has good but critical review. Graphic Trip were more positive in their brief review. Camera-wiki as usual is a good technical information source and has useful links on this camera