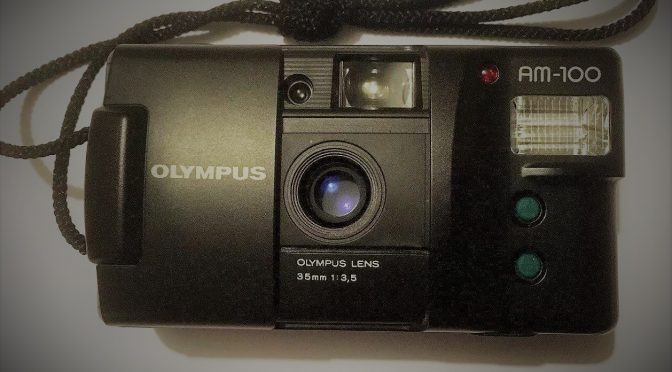 I’m a bit of a sucker of Olympus’s overlooked fixed focus shooters from the legendary PEN EE to the Supertrip. But how does  this 1987 budget number measure up  and does it match its predecessors despite newer bells and whistles  ?Back to the Future ?

Looking like your average late block 80’s non zoom AF, the AM 100 is actually a fixed focus camera with possibly some pseudo zone focus capabilities (see later).  It was the budget model of the AF/infinity series (not to be confused with the latter infinity stylus aka mju cameras) hence the US  infinity S moniker. It is nicknamed by the Japanese as the Picasso Mini (the Picasso moniker was first applied to the legendary AFL).

Powered by 2 AAA batteries, this a motor wind, DX coding auto exposure fare, wrapped up in a clamshell plastic body. This is quite rugged and although not that compact is easy to hold. The camera is auto exposure with shutter speeds of 1/45-1/500 sec and the 35mm 3 element lens opens up to f/3.5 from f/22. The camera allegedly can DX code for 50-1000ISO although with just 3 DX pins I suspect that might be a broader range.  The flash has GN10 (at 100ISO) and is fully auto. This is pretty weedy and only good for shooting a few metres.

The  focus is interesting but not really clear.  In the large part you’ll shoot it as fixed focus but 2 buttons sit on the front for close up  (0.5-1m) and distance. It is easy to assume that pushing these makes the camera act in zone focus mode but I suspect things are a bit more complex. The close up feature which forces the flash on certainly seems to do something as background objects are out of focus. However I’ve no idea what as the camera doesn’t seem to do anything when pressed

I suspect the infinity mode just cause the camera to force the smallest aperture to ensure hyper focal distance. Certainly nearer objects seem to be in focus as well.

Word of warning, use fresh batteries with this camera. A ready light comes on when you open the cover (in essence this is the camera charging the flash), This will take longer if the batteries are drained. The camera is simple enough to use as a quick snapper in good light but there are some issues. The first is those 2 focus mode button – yup hard to get. Second is the unpredictable flash – you just never know when it will kick in.

Result wise lets start with the good news. The exposure this little number does is generally okay although you’ll need to live with the flash and don’t try anything to complex. The close up mode works actually pretty good although avoid over reflective subjects for the guaranteed flash. In terms of radial distortion there is a subtle pincushion effect but actually not bad compared to some more advanced compacts

Outwith that things are mediocre.  It ain’t all that awful but this is no killer Olympus fixed focus. In good light at 2-3 m things are okay but the camera is prone to taking soft shots. Images are almost always usable but soft. The distance mode doesn’t improve things that much either

Conclusions – there are better siblings out there

To be honest I was a tad disappointed. This is actually what you’d expect from a cheap fixed focus camera but Olympus have done so much more with that in the past. I was never expect this to rival my PEN EE-2 but even the much more basic Olympus Supertrip is optically better (and that’s a camera with no real exposure control). If you like the style buy a AF-10 (or its later rehash the OZ-10) – you’ll get sharper shots with more control for the same money.

Maybe I got my hopes up too much due to my experience with the much maligned but in my opinion flawed gem the XA1. That camera is much better.

In balance though this is better than many a cheap 80’s fixed focus number. The exposure control is a boon and close up actually works