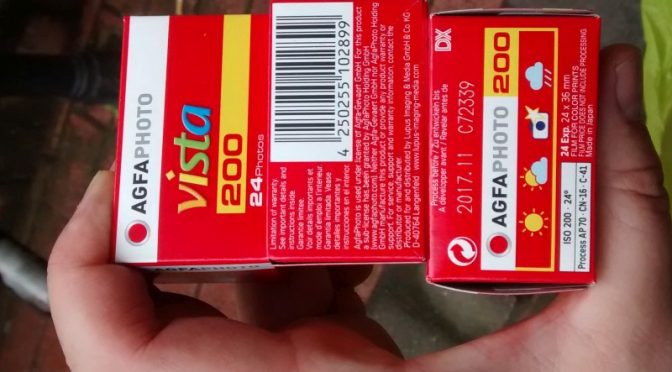 As I commented in my Annual review 2017 saw the demise of the Poundland film run that kept most of in the UK well stocked. As my last rolls of Poundland AVP200 dwindle, I thought it might be worth museing over the alternatives and the fact that actually once you add in processing you can shoot for cheaper now than you could do using Poundland film.

I’ll start by adding a disclaimer.
I’m not being paid to promote anyone in this article and what I list here is a the results of my own quick research online. This site runs ads – I’ve limited control over what you see bar a few links to Amazon. If you think you’ve seen a better deal please list !!! Any prices quoted were correct at the time of writing (10th Jan 2018) but I’ve no control over the retailers. I’ve also by and large not discussed postage.

Only really one budget 100 ISO on the market and thankfully  Lomography 100CN is a bit of a bargain. It is likely a Kodak VR based emulsion (and there’s some debate that so is cheaper Color Plus), this comes in at at around £9.90 for 3 rolls on Lomography own site although postage will be required for both unless you order over 75 Euros worth from Lomography. However Wex Photo are selling for £9 (and they currently have a 10% off film voucher code with free delivery if you spend over £50 or you can pay £2.99 for less). Go figure !!

The cheapest rolls of fresh colour film I could find online  was Fujifilm C200 (aka same stuff as AVP200). Firstcall Photographic were selling the 24 exposure rolls for £1.50. Whilst that’s almost poundland prices do bear in mind that shooting 24 exp rolls can work out a lot more expensive from a processing point of view.  Even if you can get you rolls processed for as low as £3 a roll,  buying this will end cost a bit more in the long run. However many toy cameras are risky using 36 exp rolls so this is one to bear in mind for VUWS clones and Recesky shooters.

For 36 Exposures, its a a 2 horse race for the cheapest. Neck & neck are Kodak Color Plus and Fujifilm C200. Both can be found in packs of ten online for around £25 and many photo supplies will sell single rolls for around £2.50-3. My gut feeling is Kodak is edging things more commonly and although there not much in it . Sellers on eBay seem to be cheapest at mo but do check you’re buying from a reputable UK seller and the film is fresh.

Beyond this there is Kodak Gold 200 which Firstcall are selling a pack of 3x36exp for just over £12 (£4.03/roll). Unlike Fujifilm which dropped Superia X-tra 200, Kodak have kept a higher tier consumer film.
I’d welcome your views on this film.
Have Kodak made the right move by having a budget consumer, mid tier consumer and pro film ranges or has Fujifilm got it right with just one consumer 200 ISO ?

Biggest is Agfaphoto Vista Plus  in the 400 ISO form. AG Photographic are listing it at 10x36exp for just over £37 !! but are currently as I type awaiting stock. If you can’t wait eBay & Amazon both have seller selling a Brick of 10 for around £45.

If that’s not your thing Lomography are selling their 400 ISO film in packs of 3 for £11.90 (~£3.97/roll). You’ll need to bulk order them to avoid postage charges. If you wanna pick up just a few and on the high street Boots are selling at £13.99, and I can’t really find any UK sellers cheaper.

Fujifilm Superia 400 is widely available in online stores and eBay. AG Photographic and several UK Sellers on eBay squeeze 36 rolls in 3-5 packaging in or just below  £5/roll.  Kodak Ultramax 400 is available in the £5-6 price range on eBay, Amazon and most online retailers.

Much of this will depend on your emulsion preference

C-41 chromogenic films give you ultra fine grain B&W with the convenience of Lab C-41 colour negative processing whch if you don’t process at home can save you a bob or 2. Not for all (some B&W purists hate the look) but a good and easy to use intro to B&W

In 2018, we’re still lucky to kinda have the choice of 2 C-41 B&W films in the UK (and Japan). Most of the world has just the fantastic Ilford XP2 but we also get Fujifilm Neopan 400CN. That may be a moot point as Ilford developed it but hey ! at least we have choice

Neither are that cheap usually but amazon are currently selling XP2  for £5.39 a roll !

This used to be a case of saying Fomapan for cheap as a chips B&W. Indeed fomapan remains a bargain (cheapest I’ve seen is AG Photographic’s block of 10 for £33.90 aka £3.39 a roll). However Kentmere  100 (Ilford’s bargain brand) from Sharif Photographic supplies undercuts this at £3.29 at 36 exposure roll. They also sell the 400 ISO for the same price although I can’t get a clear idea of P&P (they indicate based on parcel weight/size). There’s a school of though that Ilford rebrands Kentmere for Agafphoto for the APX100 and APX400 films. At the moment they ain’t that cheap, but Amazon has had sales of APX 100 in the past if you’re willing to buy in bulk so keep an eye open.

Both Kentmere and Fomapan are available in bulk rolls. Sharif Photographic are selling 30.5m  Fomapan 100 for just under 40 quid seem to be the cheapest I can find.  Firstcall have the 30m Kentmere in both 100 & 400 ISO for just under £45 and interestingly 30m of Washi S for Just £42. This 50 ISO orthochromatic  film is a rare artisan product from France so unusual to see it as cheap. If rolling your own scares you they also sell it for £4.29 a 36 exp roll as well as Rollei Retro 400S for £3.69 a roll.

Agfaphoto used to be the budget brand for slide film too with Precisa CT  but not any more.  You can now buy 3 makes of film for a couple of quid less. Cheapest is a rather niche choice of Adox Scala 160 a B&W slide film based on a legendary old AGFA emulsion. Firstcall is selling it for £5.69 a 36exp roll. If you want colour slide then your cheapest choice Lomography X-Pro 200 at £16.90 for 3 rolls from both Lomography and Wex Photo. A few pennies more will buy you  Rollei C200. Available  at 5 rolls for £29.45 from AG Photographic.