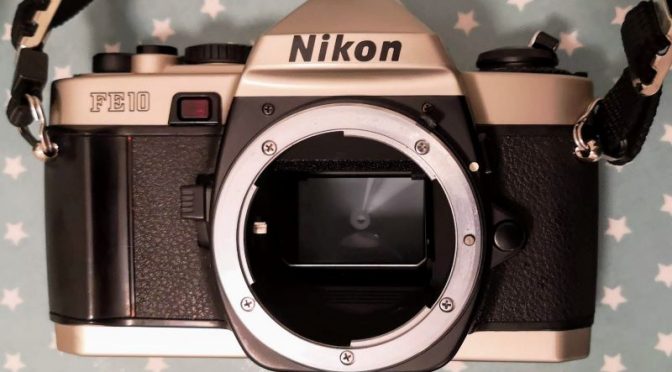 Launched in 1996 few cameras get the goat of some ‘serious’ Nikon users as this and its sibling the FM10. The major sin is they aren’t made by Nikon.  Even wikipedia  describes both as “not a true member of the Nikon compact F-series SLRs,”.  But does that make them bad cameras ?

Of course things are not helped by that lens…

We need to go back to 1995. Nikon like most SLR makers are pretty much in neck deep in AF land. The company would also launch their first own brand dSLR the E2 (with a little help from Fujifilm).

Neither were cheap and Nikon had their eyes on the burgeoning markets in South and East Asia. Whilst disposable income was increasing in the these areas, it hadn’t quite reached the  level of the Western Middle classes.  So Nikon decided they need a cheaper alternative.

Of course Nikon didn’t really do cheap SLRs. So they sought help and turned to Cosina whom had a track record of making cheap but effective SLRs under their own and others names. Often these would be based on the Cosina C series and would spawn the likes of the Canon T60 and the Olympus OM2000 as well as models for Yashica, Revue, Carena and Vivitar. The bodies would also be the basis of the new Voigtländer Bessa series of rangefinders. Historically this would lead on the the Epsom R1-D, the world first digital rangefinder and a challenger to the title of the first CSC camera.

So the mechanical FM10 arrived in 1995. This was based on the Cosina CT1 Super. It traded heavily on the FM lineage although had no direct relationship other than being a fully mechanical camera. It would be followed by our FE10 which like the earlier FE cameras used an electronically shutter. Clamour for entry level cameras in the West would lead to these both being launched in the rest of the world.

The FE10 was culled with most of Nikon’s film cameras in 2006. Nikon continued to sell 2 film cameras the flagship F6 and the FM10. The FM10 current status is unclear. Nikon still list it as active on their global site. But the camera’s demise has been suggested from 2017. Nikon UK store describes it as discontinued and the US store just indicates out of stock. If available it is yours for a mere $569.95USD !!!

The first Nikon FE arrived in 1977 alongside the mechanical shutter  Nikon FM. These would sit as Nikon’s semi professional models under the Nikon F2.

The FE had a electronically controlled shutter but shared the same fantastic alloy chassis. However inside, that shutter had been evolving since 1972.  Basically the  Nikkormat EL was the precursor. This would be followed in turn by the ELW, Nikon EL2 and then the FE each with incremental changes. The FE would be replaced by the FE2 in 1983

But the FE10 is based on the K-Mount Cosina C2 & C3. Those cameras are very much 1990’s styled. But Nikon wanted a more traditional looking brief. The only modern features are the slight handgrip (as does the FM10) and the push button self timer.

There’s a lot of plastic here. A hell of a lot of plastic. If you’ve held any other Nikon even a very plasticky F55, you realise this is some interloper. The heft just feels wrong, it weights just 400gsm without lens or batteries.

The camera has a two tone look. Shame – no all black version but this was the mid 90’s. It would have been cooler if the  pentaprism cover had the leatherette styling of the FE2. I’m also not a fan of the champagne silver looks.

The shutter sound is just wrong for a Nikon. It sound tinny.

Nikon seemed to have gifted Cosina some their rubberised coating as my camera had the same tarry black mess on it. Cleaned off easily with some Isopropyl alcohol.

This is a manual focus SLR with a metal electronically controlled vertical plane shutter. That shutter is capable of 1sec to 1/2000 plus Bulb setting in manual set mode or 8 sec to 1/2000 in the auto mode (aperture priority). It isn’t clear if this is a step-less shutter as only a single speed appears in auto mode.

The metering system is described as a centre weighted. It is capable of EV1-18

Flash has standard contacts and an extra one for Nikon speedlights. If used with a compatible speedlight you can sync at slow 1/90. Otherwise it is worse (1/60 or slower). There is no TTL flash metering.

There is a depth of view preview, electronic timer and the usual threads for tripod and cable. Unusual for an entry level SLR there is an Auto Exposure Lock (AEL) button which is easy to press with your left hand on the lens mount. Unlike the earlier FE there is no rescue manual shutter speed if the batteries fail and nor is there any motor drive option. The camera is powered by 2xSR44/LR44 or equivalent. You could also use a lithium CR-1/3N.

A little dark and small for my tastes, the viewfinder is okay. We’ve a non changeable K focus screen and on the left you get a series of LED showing shutter speed. In Manual they show you the mismatch between set shutter and metered shutter speed. In Auto the actual shutter speed is shown.

The K screen as ever is good for manual focusing

This is laid out as a classic SLR.

On your left side you have the dial you use to manually set the ISO (25-3200ISO). The dial is also marked for exposure compensation reducing parts. Downside of this for me is if you adjust EV then don’t use your camera for a bit and forget your film speed your run the risk of shooting off speed. But Then again at least it is marked for this.

On your right is the shutter dial. you need to depress a button to move out of A (auto – here aperture priority) to the manual settings. there is also a lock setting unlike the original Cosinas.

The shutter button is a bit too sensitive for my tastes. I found it too easy to take a shot when just checking exposure by half depressing. The original FE uses the winder lever as the lock and this is much more logical IMHO.

Broadly It functions as you’d expect. My only gripe is the shutter button sensitivity

The FE10 will work almost all Nikon F-mount lenses that are auto indexing and have an aperture dial that is mechanically coupled. So basically that’s almost every lens from the mid 70’s up to now. There are 3 exception. First the G  lenses (no aperture dial). Then the recent E lenses that have an electronic diaphragm (the camera will work fine with E series lenses developed for the Nikon EM) . The other exception are the cutting edge AF-P lenses that no film and many digital SLR can’t use.

This actually gives the camera the same range of support as the FE2 or FM3a.

The camera is a good match for the E series lens and you’d expect Nikon would make a similar cheap but useable lens. But no…

The first clue is  the made in Japan on the lens.  In 1991 Nikon started lens and camera production in Thailand. Nikon continued to make high end optics in Japan. But this is no high end lens. In fact it gets an honourable mention on Ken Rockwell’s 10 worst Nikon lens (he doesn’t include it in the ’10’ as it’s not a Nikon).

The lens was made by Cosina and is the same as the Cosina 35-70mm 1:3.5-4.8 MC Macro K-mount lens. Both lens share exactly the same spec and there’s even an OM Olympus  lens that is likely of the same providence. The Cosina version is not well regarded and the sort of lens you can pick up for a £5. MIR suggest this a 8 element 7 group lens.

The lens isn’t any where as good as any other Nikon lens I own (and I’m a muppet who has a E series 28mm).

I’m gonna post an update in the New Year with some shots on it.

Okay this isn’t really a Nikon in the true sense. If you are a serious Nikon Fan boy you are probably gonna feel disappointed with the foibles and cut corners. The build quality is worse than any Nikon I’ve handled, the viewfinder crappier and the over sensitive shutter button…..

But then again it is a Nikon F mount cameras that has good core features not seen on budget models like DoF preview & AEL It’s lightweight, has reasonable metering and can use the same range of lenses that a Nikon FE2 or FM3a can. It is a better buy IMHO to the FM10 as you get both manual and aperture priority shooting. except for the fact it’s dead without batteries or if the electrics fail.

There’s weird snobbery here. If this was branded Cosina people would describe it as a great budget alternative to a real Nikon. You rarely hear people moaning about the Cosina C2 in Pentax circles. And oddly there’s more love for the Canon T60 and Olympus OM2000 to which it is directly related

It is a good beginner’s SLR and a more than adequate 2nd body in the bag. As a budget camera my only gripe is that sensitive shutter button.

Just try to get one without that lens or buy a working FE or FE2 without the lens for the same money as a FE10 with lens. If you can live with the styling and autowind a F-301 may be a better bet.

Mike Butkus’s wonderful site has the FE10 manual (chuck him a few bucks for this service). There’s quick critical take on this at Nikon Cafe.  Kosmo Foto has a quick review of the sister FM10