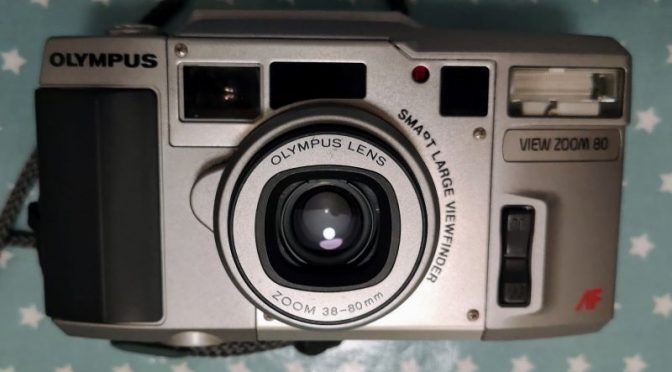 Canny de Camera strode across the land wielding his His Holy Olympus with the its cross hair of holy fire shooting Demons and Family portraits with easy. Welcome to the surreal experience of the View Zoom 80 (the Accura View Zoom 80 in the US) a 35mm zoom compact camera with a flaming red cross in the viewfinder. You’ll feel at home if you’re a fan of 70’s Italian Horror movies, 90’s FPS or religious things. But is it any good ?

This is one of several View Zoom Cameras that were launched at the turn of the century. The View Zoom are lumped in with a group of cameras known as the Accura (US), Super Zoom and OZ series. These were all released as cheaper models alongside Olympus’s premier mju series compacts. Often overlooked and not helped by some awful models in the range. However there are some alright cameras like the OZ-10. Is this another ?

The view zooms all share the rangefinder-esque styling whilst the rest of the models resemble more traditional zoom compacts. The View Zoom 80 should not to be confused with the Accura 80, Accura 80s and the awful Superzoom 80s.

Raúl Sá Dantas dates this camera to 1993. It features a 38-80mm lens and would be followed by the View Zoom 90 and View Zoom 120 (numbers indicting maximal zoom length)

The spec can be found on CNET and on this Russian site that has the manual in translated into Russian (ironically google handily translates it back here) .

The camera has a pretty low upper shutter speed (range 1sec-1/170) according to CNET. But that creates an interesting issue.

This suggests one of 2 things. Either the aperture just widens by just under a stop (unlikely). Or the aperture is fixed and either CNET has the wrong upper speed or Olympus goofed the maths. I’d guess the former is more likely and if you raise the upper shutter to 1/290 the numbers line up pretty good with a fixed aperture.

This is quite a poor range irrespective and even with 100 ISO film you’ll get some over exposure in bright light. Lucky I live in rainy Scotand eh !

Power to the People

The camera is powered by 1 CR123A Lithium Battery. There is (full) stepped DX coding support for 50-3200 ISO. Why a camera limited to EV 12.5 support 3200ISO I will never know, but I guess it’s useful if you plan on night shooting.

You get an electronic (12 sec) timer and tripod mount. For flash you can cycle between auto (default), red eye reduction, off, fill in, night scene & night scene red eye modes, The viewfinder also has a diopter adjust a rare feature on such a basic camera

A QD version was available with a databack. Mines doesn’t have it but the year goes up to ’49 making this handy for the next 30 years.

Weirdly in 2019 this looks quite good. There’s a retro theme aping rangefinders going on. The camera is predominately 2 tone plastic but there is thin metal around the lens mount giving a retro touch of class.

It isn’t small but about average for a non prestige zoom compact of its time. It is just much better looking than them. It feels firm enough although the plastic film compartment door does wobble a bit

There’s a standard easy load system for 35mm film. Just open rear door by latch beside neck strap mount, pop DX coded film in and pull leader over to the other side. Close rear and should autoload (if LCD on top plate flashes E then there is an issue).

The viewfinder appears simple but actually pretty good. The AF cross hair/god’s judgment grabs you in all it glowing red. Fail to lock or go to close and it flashes and locks the shutter release. Get focus lock and the cross glows a steady brighter. Go close and a parallax focus correction corner appears – Minimalist but works well. the viewfinder zooms with the lens which is controlled a toggle switch on the front (it’s okay but I prefer something behind the shutter button.

AF lock is reasonably speedy as is the zoom. Its about class average as is the motor wind for noise.

In terms of the autoflash mode, flash kicks in much lower light than some other compacts with the lens wide. With the lens long you’ll really need good daylight or the flash will be firing. Of course you can thankful disarm it and a flash warning icon does appear in the viewfinder.

So I wasn’t expecting much here and I did use faster than 100 ISO film (kodacolor 200 and 400ISO XP2). That sad I didn’t run into over exposure issues at all. Now I live in one of the wetter counties of Scotland which probably explains that.Given the specs I’d still be concerned about this on a blistering sunny day in Ibiza or Cancun with 100 let alone 400 ISO at wide.

And the camera actually coped with some difficult shooting from an exposure. Despite my reservations this did just as well as many a higher class compact I’ve used.

Most of the time this was pretty accurate and this was a camera that actually did distance shots well better than my mju-1. Had a few problems with complex foregrounds with busy background where the focus was off but I had no warning. These are often an issue for more basic cameras.

This was much better than I expected. It isn’t quite in the same league as the best but it is a good zoom compact optically

Neither length vignettes but both have some pincushion distortion more noticeable at wide. Again better than I expected.

These weirdly ain’t that common and at the time just 2 grace the UK eBay site both at an eye watering ~£25 By it Now. I’m not sure its worth that sort of money but up to a tenner might seem reasonable.

Ignoring flaming cross hair of power, this was never gonna be a top end compact. it is crippled with a narrow range exposure system which likely lacks any aperture. But weirdly it is better than it should be. Optically the lens is quite good and whilst the exposure system is crippled, it is competent enough provided you don’t live in Sunny climes. The retro styling is quite catching although this makes it less than compact.

This is not anything that a Pentax Espio AF Zoom should get worried about. But thats’s my gold standard zoom compact. The view zoom is more quirky and does alright. It is worthy enough for a few quid but just don’t take it one your next beach holiday.

A better comparison is the mju zoom 105. Yes I know that has a full x3 zoom but ignoring that the shots were largely comparable. The mju was better at complex shooting and given it had a EV100 range up to 16 at wide is a better bet in bright light. But the View Zoom is as good in most shots. It also feels more likely to last longer too. Again given a choice I’d take the mju but the difference is tellingly slighter.

So great if you love flaming crosses or plan never going to sunny climes.

All films done at AG Photolab with medium scanning (.jpg)