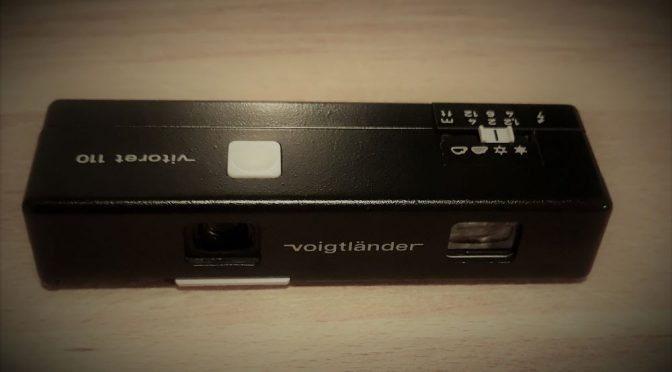 You’ve got to give Voigtländer the credit for some very gorgeous cameras. But then again as the longest serving camera make in the world that’s not a surprise. But how does this mid 70’s simple 110 camera that I got for a quid match up to the expectations ?

This was my second Poundland Challenge 2019 Quid or less Voigtländer. Ironically it was the second Vitoret although the older 35mm version was sadly fungus encrusted.

Voigtländer can trace it’s roots as far back as 1756. It not only is the longest serving camera maker name but is associated with key moments in photographic innovation. it was for Voigtländer, that Josef Petzval designed his famous lens. The 1964 Vitrona is arguably the first built in flash camera although you did need to screw in a battery grip to use.

The heyday of the company is often perceived to be the era from 1923-1956, when the company was owned by German Pharmaceutical Giant Schering AG. In 1956 they sold their shares to Carl Zeiss. And by 1976 the company was jointly being run by Carl Zeiss, Local government and Rollei.

Unsurprisingly it would be Rollei that provided the skills for the Vitoret 110. This was in the form of Heinz Waaske, the legendary designer whom came up with Edixa Reflex for Wirgin. He famously designed the Rollei 35, which Wirgin turned down. So Heinz took his designs to Rollei and the rest is history.

He had 110 form, designing Rollei’s legendary A110 so the Vitoret 110 was on good footing.

Unlike the A110, this is a simpler unmetered affair. there’s a fixed focus Lanthar 24mm 1:5.6 lens. That lens is believed to be a triplet. The camera has no metering but offers 4 weather condition settings geared for 80 ISO film. The weather slider moves between 3 apertures (f/16 bright sun, f/8 for hazy sun and f/5.6 for light cloud all at 1/125). The forth setting (heavy cloud) remains at f/5.6 but shutter drops to 1/60).

The camera has a standard hotshoe. You can use any you want but
Voigtländer offered various mode from flash cube holders to full electronic flashes. The V200 is probably the best match and uses 2xAAA.

There’s a version with a metering called the Vitoret 110 EL. Similar to the Rollei E110, you set for good or bad weather and then the metering takes over. The EL can also sense the notch on 110 cartridges which were used in the day to delineate normal (80-100ISO) and High speed (400ISO) film historically.

This is nicely made and although simple has a quality feel. It looks and feels like it is metal but is actually plastic. My £1 one came with the original box which had instructions, a wrist strap and pocket clip that slides into the hotshoe. This is one well thought out design.

To load depress a small button on the bottom. This allows you to slide the rear viewfinder cover to the side slightly unlocking the film door.

The camera advance is neatly twinned with the lens cover. There’s a slide on the front under the lens that sliding will open both viewfinder and lens cover. It will also unlock & cock the shutter and advance the film.

This is a mixed bag. Shooting Lomography Tiger 200CN works well with this camera and the exposure settings. But given it’s a over a stop more you do need to be aware or you will over expose. The film’s lattitude is alright but don’t expect the range you’d get from Portra.

The lens is alright but compared to 100 cameras you can focus like the Minolta Autopak Pocket 430 it can’t complete. So on a few meters away things can be pretty sharp but on long shots, the Vitoret is pretty soft.

This was gonna be a two roll review but the camera gave out with the 1/60 setting jamming on open.

There’s a lot to like here. A compact incredibly well designed simple camera. But the lens while not bad is not great. Now granted most better optic’d 110 cameras are much bigger but Heinz had developed an other 110 before he got to the Vitoret.

Of course that’s the Rollei A110. Almost as small but with full metering and zone focus. A bloody compact marvel and capable of highly impressive images that could rival even the Minolta Zoom 110 SLR and the Pentax Auto 110.

And that really is the Rub.
This leaves the Vitoret in an odd place. It’s not in the same league as the A110 but it’s much better than many lo-fi cameras. But it perhaps despite it weaknesses is too clinical and compared to really “cheap” cameras like the Halina micro 110 has little character

Shame as it seems so well made….. although mines failed I have got another so I may Revisit this. Although it wasn’t a cheap camera when launched you can get one for a £1-10 which makes it a bargain,

John Margett has a good review of this camera. A copy of the manual can be found at submin

3 thoughts on “Small Is The New Sexy ? – The Voigtländer Vitoret 110 Review”