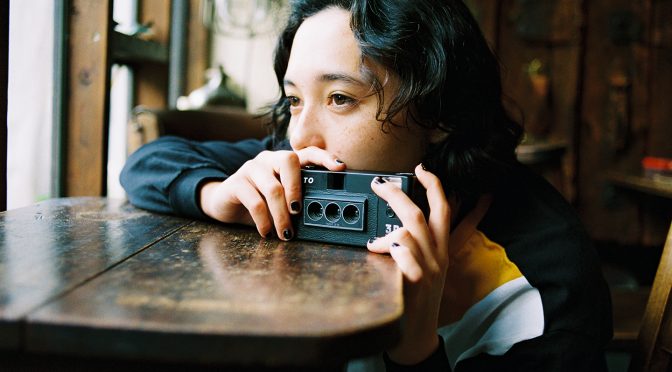 If Kickstarter in 2018 kept us hanging on high end gear like the Reflex SLR, then 2019 has turned out to be decidedly more lo-fi. Hot on the heals of the Meh ! Yashica MF-1, arrived my Reto3D camera. It promises 3D photos via the wiggle technique. But is it more Lo-fi dross or does it add something to the world of film based 3D photography. And why bother ?

Actually there’s a weird link between Yashica and Reto. Just like the Y35 promo video, the Reto3D Kickstarter video had an attractive young lass wandering around with the respective cameras. Why both companies in the 2010’s still think it’s sexy imagine having said young lass raising her risk of Lung disease and cancer by smoking is beyond me. Thankfully at least Yashica seem to have moved on…

Reto decided that there wasn’t any 3D cameras being made and the old ones were two expensive so hence they launched the Reto3D.

But were we wanting that ?

Tell me about 3D photography ?

Luckily I’d just done a post on the history of this so I don’t have too !!

So Are Reto Right ? No more 3D cameras ?

Technically yes….
Holga were the last folk making and marketing 3D film cameras. But although production had ceased they are still widely available. Also those DIY pinhole fanatics have long fiddled with stereo pinhole cameras for free with literally old cardboard boxes and some sticky tape.

And then there’s the Action sampler. Not Billed as a 3D camera it features 4 lenses which can be used as 2 sets of stereo lenses.

Hang on … that Reto3D looks familiar !

Yup it does doesn’t it ?
I guess what Reto were talking about in things being too expensive were this and it’s clones.

Nimslo was the brainchild of Jerry Nims and Allen Lo. The camera they created and the printing system they used was not exactly new but was the first time both were geared for consumers to get a 3D camera from which they could get something with a print that had a 3D effect without the need for a stereoscopic viewer.

Of course Nims & Lo used the Lenticular printing technique. You’ll have seen loads of lenticular images. They’re those freebie cards you get as kids in cereals that are either 3D or seem to move/change as you tilt the card. This YouTube video has some lenticular prints captured via a Nimslo.

So why aren’t there loads of Nimslos about ?

It should have been a massive success but ….
And it started so well being the best selling 35mm camera in the US when launched in 1981. Except those cameras would not be delivered on time thanks to a strike at the Timex plant in Dundee, Scotland. The concept would limp on but as, wikipedia notes that lenticular printing for consumers was dead by 2012

So if you can’t print it why make a new one ?

You’d think it would have just become a curio.

Many folk continued to use the Nimslo for 2 image 3D stereo work. But things really changed with the rise of animated .gif image files. People started to realise you could simulate 3D by putting Stereo or even better Nimslo images into an animated .gif.

This is a technique called Wiggle 3D or Wiggle Stereoscopy. Jamie Martinez is one of the best known photographer for this technique including his work with the singer M.I.A. His stream on Giphy can be found here and below is a sample

What does Reto3D bring to the table ?

We’ll look at the spec and compare it to earlier 3D cameras like the Nimslo in a mo. What Reto deserve credit for are bring the concept back into current manufacturing. No one moans that much about Lomography producing the Diana F+ when you can still buy an original Diana clone fairly easily.

The other USP is the iPhone app they’ve made to making these wiggle images easily. Essentially the App lets you fix a focal point on your foreground subject. This YouTube video has a good overview of the app.

That’s a very good question. Reto are bit cagey on when the Android App is coming.

That to me is really not good enough. Apple represents only between 10-20% of all mobiles shipped worldwide. They bulk of the rest of the phones are android based. And why no computer app ? I’d rather do this on my laptop.

Luckily there are plenty of other software and online sites to make animated gifs. But as we’ll see that isn’t that easy

So What’s the camera spec ?

The camera uses conventional 35mm film and takes 3 half frame images with via 30mm optical grade acrylic (aka plastic lenses). Aperture and shutter are fixed (f/11 & 1/125) and the camera has fixed focus (1m to infinity). The camera has a built in manually triggered flash (1xAA) and there is no other electrics (so no low light warning)

The Nimslo 3d had 4 glass triplet 30mm 1:5.6 lenses with automated exposure adjusting both aperture and shutter speeds. It too was fixed focus. It had a hotshoe mount for flash and a low light LED warning system

Is it Built well and Easy to use ?

The Reto3D takes it cues from the Nimslo. It’s a brick of a camera made of plastic. But that plastic feels pretty good quality and put together. Loading is easy and the camera has a simple view finder. Shooting feels like any other camera with the only noticeable difference being the thumbwheel takes a little longer.

On the Kickstarter site some have complained about the flash failing. I had no issues on the rolls I shot.

Show me the Results

The concept of these cameras is to have a close focal point with the background not much further so I was assuming the camera would be toast on long shooting. The flash equally should illuminate close objects well at around 1-2 metres but fade off beyond

And I was kinda right.

Taking individual frames the camera actually performs as I would expect. Overall images are soft and distance shots soften off more. The image also really softens towards the the corner of the frame. But this actually did quite well when you compare it to some of the shots from my MF-1 and disposable cameras. They are better close up but not by lots. But at distance y’know the Reto3D actually is a bit better centrally than the MF-1 and the 2 disposable cameras. It is does soften a lot towards the edges though.

But not bad for plastic half frame.

The images have a degree of pincushion distortion and there is fringing evident . A subtle vignette appears in the bottom left corner on many shots on all 3 lenses.

I’m still smarting a bit by Reto’s refusal to create a Android (or PC) app. But hey ho.

I used a few tools for this but ended up getting similar results. Of the things I tried ezgif.com an online tool was easy to use and didn’t force me to register or get advertising. I’d alos suggest you have a glance at this post at adorama which details how you can do this in the likes of photoshop.

I followed advice and used the 3 images from the shot but adding at the end andother copy of the middle image to make a smooth loop. I tended to stick to the 0.2sec frame

What i realised that to get a better imge you needed to keep your foreground object roughly on the same point. So by aligning all 3 image to the a screw on the sign (did this by careful cropping so the X axis point on the screw was identical). I got this

I’m still getting the hang of the technique.

But it has been fun.

Without doubt the shots I’ve seen done by Nimslo cameras are better. That’s not surprising it has 4 not 3 lenses and those are glass. The camera also has full exposure control.

But ya need to give Reto some credit for bring a dead format back. Also there’s the cost. Reto are now selling pre orders for the standard (classic) version at $99USD.

Sounds a lot for a plastic camera but it’s incredibly cheap for the class. A Nimslo will set you back 2-5x as much and a Nishika will be 2-3x as much. Although a Nimslo is much more high end you’ll need a flash in addition and it’s own dedicated one sells for as much as the camera. Luckily you can use any.

And do you need a multi lensed camera ?

You can do the same with a old (or new) stereo camera. Downside is things are a bit more jerky with just 2 frames. Also stereo cameras (bar the Holga class) are not exactly the cheap end of vintage.

And then there is the option of using 2 more more cameras in a jerry rigged set up. There are lots of posts online on how to do this. Wikihow has a quick run through using 2 DSLR but the principle would apply to film. Of course you need 2 identical focal length cameras to do this.

But you can do this with just 1 camera. I managed to achieve this with a few minutes fiddling around with my mobile phone

I enjoyed this but..
It is a niche product even by lo-fi standards and many folk will give it a dodge as it involves to much post editing. Although it can take an okay half frame shot (well for a plastic lens) you also couldn’t justify it as a still only camera due to the film used. Costwise another 10 bucks will buy you a Diana Instant Square or you can save $10 for film and get a Diana F+ with flash new

Reto don’t help by making a iPhone app only. That’s just plain stupid in 2019. That said I suspect most folk will edit shots on their PC. It also is less optically good than the Nimslo. And it is really a case of being a sandwich short of a picnic having just 3 lenses rather than 4 (although that might be for legal reasons). Mines seems robust but the flash goings seems to be an issue.

However if you want to get into the wiggle 3D thang, its a great and cheap start. Credit due it’s a novel concept and they’ve priced it right being much less than a second hand Nimslo. You can DIY or use a Stereo camera but the extra frame does smooth things out a bit here and the camera is in the Lomography price range.

Shame about the app and if you don’t like editing digitally…..

One thought on “New Adventures in the Third Dimension- Reto3D Review”