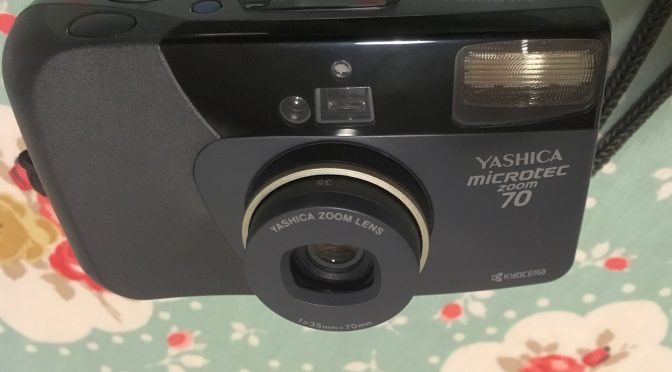 Yet another mid 90’s compact from Japan (aka Kyocera Lynx 70) but oddly the first I’ve come across with a professional period review. Popular Photography thought this and its Zoom 90 sibling sizzled and favourably made comparisons to the still legendary and elite Yashica T4. But 2 decades on how does it measure up ?

Yashica has an interesting history. It was legendary as a manufacturer from  classic TLRs right through its classic compact rangefinders like the Lynx right up to the Contax SLR collaboration. The company was taken over in 1983 by Kyocera and initially little changed but the company stumbled in the AF age and failed to make a success with its AF SLR against intense competition. Kyocera pulled back to the compact market but managed to produce some highly regarded models including the notable T series. Still it wasn’t enough to stem the collapse and Kyocera pulled out of both the film and digital camera market in 2005.

But does this consumer cam sizzle or was the ’95 review overdone. The review is one of the best sources of info on these cams as I’ve yet to see a manual in the wild. Camera-wiki notes actually 3 Microtec Zooms (70, 90 & 120) and a fixed focus camera with the Microtec moniker (the Kyocera title of P.mini 3 suggests no real link)

The camera has a logical layout with top plate shutter and zoom toggle switch. Also on the Top is the LCD screen on/off, timer and flash mode. The timer has only one purpose to turn on and off the 10 sec electronic timer. The flash mode is a bit more interesting. It cycles between auto (default), auto red eye, flash on, flash on red eye, flash off and infinity modest as popular photography describe. This sounds entry level compared to the Pentax Espio AF Zoom but actual is better than the Mighty Olympus mju-1. What’s a tad more interesting is that outwith the 2 auto flash modes, dependant on light levels,  one of 2 icons may appear (one of moon and star another is B). Whether the camera does anything different or if they are simple to warn you to consider a tripod I dunno and the magazine article sadly doesn’t mention.

Stylewise the camera resembles rivals like some of the smaller Pentax Espio series and is typical late 90’s black plastic. The gold band around lens barrel is a nice stylistic point. The controls make ergonomic sense and this is a nicely weighted camera with rage centre of balance just off towards the control side. Shame it’s let down by the viewfinder. This itself is quite clear and bright with clear lines and little distortion. It also had no impact if used with left or right eye – it’s just you’ll end up struggling as it catches the nose badly whatever eye you use.

In use quite good. A tad noisy but quick to turn on, zoom and focus lock. The usual focus and flash LED sit beside viewfinder. Camera can get down to 2ft according to Popular Photography. The upper shutter speed is low compared to some rivals but not a critical issue

Exposure was accurate and central focus was pretty sharp  at close to mid range (given this is only a 38 focus step camera not bad) – IMHO  better at the 70mm end than 35mm but even there things are pleasing. Like many consumer AF compacts it did seem to struggle a bit at distance but the infinity setting helps.. There is some pincushion distortion at the 35mm end but I couldn’t spot the very slight barrel distortion at the 70mm end described in the ’95 review. Flash is okay for causal relatively close shots but quite low guide number rating. The Kyocera Lynx version had a panorama setting and a databack version exists – Yashica MicroElite Zoom 70.

Although quite low spec compared to rivals this camera’s optics are better than many rivals although not as good as the T4. There are also better  AF Zoom compacts optically  and options-wise  (like my gold standard Pentax  Espio AF Zoom)  but that said it is a reasonable, simple to use AF compact if you chance upon one at a cheap price.