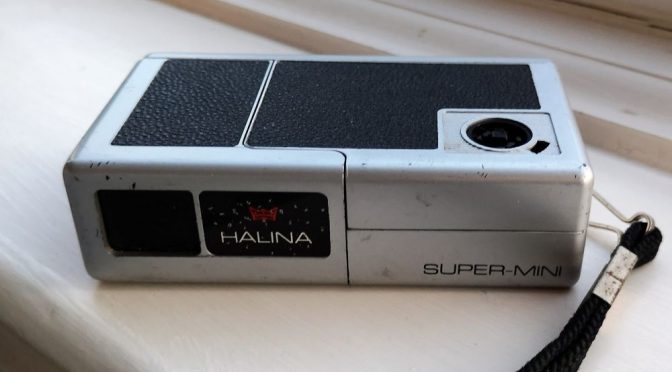 “Hello Q. Got any special gear for this mission for me? “.
Q looked and sighed.
“After you crashing the Aston and losing the laser beam Rolex in the midst of the current austerity squeeze not so much. What happened to the rocket Launching Nikon by the way ?”

“But anyway” said Q handing him a Halina Super-Mini.

“What ! not the minox ?”
“We had to sell that to pay for the bumper on the Aston! Double O. You’ll just have to make do with this”
“And what exactly  is this ?”

On Her Majesty’s Secret Service

“The Halina Super-Mini is a 110 ultra compact camera double O.”
“I knew a Halina once Q, Lovely lass from Kattsjärten. Had quite …”

Q coughed. ” Not that Halina. This was made by W.Haking in Hong Kong from around 1974. We suspect it’s a copy of the 1972 Hanimex Mini which was likely made by Haking and designed by Hanimex’s Jerry Arnott.

For Your Eyes Only

“Ludicrously simple Double O. If the theory that its a clone of the Hanimex is right we’ve around a fixed focus 25mm lens with a fixed ~ f/9.5 aperture. Our French agent has evidence like the Hanimex in normal use the shutter is 1/90 but with Magicubes it falls to 1/50 of a second”

“Much simpler Double O. Magicubes are a later version of flashcubes which were brought in as a simple version of single use flashbulbs. Like Flashcubes, each Magicube contains 4 bulbs which automatically rotate each time you take a shot. The main difference is that Magicubes don’t require any battery power to fire – they use a chemical trigger.”

View To a Kill

“You simply take the plastic chassis and gently pull apart. This opens up the camera revealing the lens. You’ll need to open it up like that to load film. There’s a small black button on flash mount side of the rear. When the camera is opened up and this is depressed the film door swings open. To advance the film you just close and open up the camera. There’s a point to the front for mounting Magicubes.”

“However It’s reasonably well made Double O with the silver plastic looking like metal at first glance. You can even shoot all George Lazenby holding the camera the wrong way up”

Double O looked quizzical “But does it shoot like the Minox ?”

From Hong Kong With Love

“Its a Halina for Heaven’s sake, Double O !! So it’s going to be pretty poor. The camera is best around 3 meters. Its pretty soft even here but things fall off rapidly the further out you go. There’ll be no long shots of hidden ammo dumps here Double O. But close up it’s not the worse 110 lens I’ve seen. Just don’t expect macro shots”

“It has a little fall off to the edges and just a smidge of moustache radial distortion. The lens equates to a 50mm lens on a 35mm camera (not quite wide enough if you ask me)”

“You’ve no control over exposure other than bunging a Magicube in (if you can source one). However Lomography’s Color Tiger 200CN is relatively forgiving provide you shoot in reasonable light.”

The Spy Who Loved Me ?

Double O Shuddered. “Gawd this sound awful Q ? Would you use really send me out with it?”

Q broke into a wild smile. “Only joking. We’ve been filming you all along Double O. M wants to use this as training video for new recruits to see how long they’d take to smell a rat”

“It isn’t great Double O. In fact the cheaper Lo-Fi Halina Micro 110 is better fun and almost as good optically. But for a lomographer like my nephew whom lent it to me, the super-mini may have some charm. Betcha Idris would like it?

For Your Eyes Only

“My Money’s on Madden Q. So what are the alternatives ?”

“For actual quality ultra compact in a 110 format you’d need to consider the Zone focus auto exposure Rollei A110, Minox did make a very high end rangefinder 110 that you can source for a bit more but would still be less than a Hundred on a good day, There’s Leica prototype 110 but we’d need to ask M to raid the budget as they usually sell for over $10,000USD despite being a close version of the Minox 110. “

If the shape of the Halina interests you there is the Minolta Pocket Autopak 470 which has a detachable electronic flash unit. And if compact size and style are important consider the Voigtländer Vitoret 110 series.