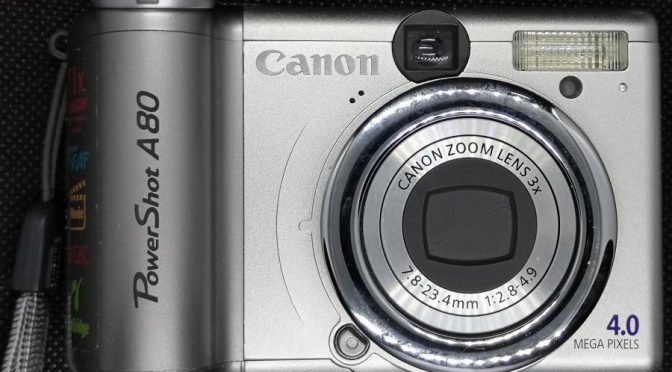 The A80 oddly is described as a beginner’s camera. But it comes with a host of feature seen on more advanced compact digital of the time. It offers quite a lot of bangs for a 2003 compact. But there are some issues you really need to know about

Canon are one of the Japanese majors that weathered the transition to digital well. They remain one of the leading makes across a range of digital cameras.

In terms of compacts the company was able to build on the success of it’s film lines. Essentially this led to 2 comparable digital compact brands which Canon still use today. On one side stylish, ultra compact IXUS digitals. These look great and had good sensors and internals but have more limited user control. They have their roots in the APS film IXUS series.

The other group is the power shot series. This is quite a disparate series stretching from Bridge cameras to elite G series. The lineage to the legendary Sure Shot 35mm film compact series is obvious.

At launch in 2003 Canon described this as a beginner camera but not entry level. They described it as carrying similar features to the 2002 award winning Power Shot G2

The camera uses “Evaluative” matrix metering although both centre weighted and spot metering. The shutter on some modes can go from 15 sec to 1/2000 although in many modes slowest shutter is pegged at 1.3 sec. The camera has an ISO range of 50-400 which sound poor but was good in the day.

The camera ha on board image processing using the 1st Gen DiGiC system. Storage is by Compact Flash. This is more bulky than equivalent SD cards but they are still made today and unlike SD cards, their storage limit isn’t pegged at 2Gb (standard SD cards – SDHC wouldn’t arrive until 2006). Images are only stored as jpeg files. There is no RAW option. The camera also defaults to storing at fine detail setting rather than the less compressed Super Fine setting. It’s the former Default setting we’re testing.

Power is by 4 AA batteries (good for up to 250 shots according to manual). What you trade for bulk with conventially batteries is more than made up by the fact that you don’t have to worry about battery degradation. Some accessory lenses were available for close up work by detaching the bezel around the lens

It’s a typical chunky early noughties camera. More for winter coat deep pocket than a light jacket pocket. It is well made stuff with a lot of quality “I can’t believe it’s not metal” plastic. Top plate has on/off button, zoom toggle around the shutter button and the main mode dial (more on that later)

On the rear you’ve the typical set of controls with a directional joypad and a smattering of other buttons. But 2 things stand out.

Firstly there’s a switch rather than button to switch to playback which I think is neat. Then there is the articulated LCD which was pretty cool on a purported beginner’s model. Even the 2010 Lumix G1 didn’t have one. This is very handy and helps for the fact that the small 1.5″ 67,000 Pixel screen can be hard to see in direct sunlight. This camera would have had potenial for early Vloggers with this too. But the fact you’re limited to VGA resolution video at 15fps makes it pretty lo-standard now. This is made worse by a 3 minute maximal record time although this wasn’t untypical for the time.

There is also a perfectly adequate although basic zooming optical finder.

The Mode dial starts to separate this from other cameras. You get the usual auto mode and scene modes (portrait, landscape, night shooting and sports mode). There is also a panorama stitch assist mode and a slow shutter mode. But what is really impressive is the user exposure control. You get as well as Auto a more advance program mode, shutter priority (Tv), aperture priority (Av) and manual. There are 2 custom setting modes (these allow you to save settings from the P, Tv, Av and M modes so you could have a custom single focal point Av mode with flash forced off for example.

In the menus and dependant on modes you get all the usual bang and whizzes (ISO adjust, resolution, compression, EV compensation, White balance, flash modes, focusing modes, metering modes). You can also set for manual focus (done by using buttons on rear.

For a 2003 digital compact shooting was easy. It AF locks reasonably quickly with a beep and has surprisingly little shutter lag. You’ll probably use it most in Auto , program or one of the scenic modes. TV, AV and M are however reasonably usable.

You’ll be glad the screen is articulate as like any other camera of the era it’s a pain in the sun. It’s also a bit pokey. So you will appreciate the viewfinder option. Again this is typical of the era.

It’s quite heavy at 250gms without batteries.

The camera broadly does a reasonable job of exposing things when left to its own devices in straight forward lighting. But like most early noughties compacts it has dynamic range of badly expired slide film (i.e. slim). Usually it’s evident with late day skies which are blown white but thankfully the camera is metering for the foreground (not great if you’re a landscape photog but fine if you’re the intended market).

However you can get the reverse and this may be an issue with complex lighting like below.

I guess if the focus had been the dog walker, I could have used fill in flash. And the camera is no worse than the average for this time. But the metering isn’t perfect in other shots. I took this shot of the blossoms a few days before

The camera focuses on the centre which is what I wanted but sadly meters more for the background. This takes up most of the shot. But this is a complex lighting shot. I doubt few 2003 compact cameras could do better.

The camera copes with some low light shooting. Although shake is gonna be an issue as the ISO upper range of 400 . The meter controlled flash works reasonably well. The range on wide angle is from 0.45m to 4.4m (tele is half that).

In terms of distortions, aberrations and processing issues there’s generally good news. The tele end shows minimal radial distortion whilst the wide has some barrel distortion but better than many. The tele end however has more softness at the edges.

If you do zoom in you notice fringing but there is something you need to keep in mind. Take this shot of the Devorgilla Bridge

Looks okay but if you zoom in fringing and artefacts do appear. The image gets pretty soft too.

But this is a 4MP camera for goodness sake. You’d never look to zoom in as much as you would with a modern camera. If you look at these areas Pixel for Pixel it still looks okay.

It does suffer from some over obvious straight lines due to sharpening but again this is common with cameras of the era. Interestingly it does better than some later cameras.

Above is my standard long shot and zoomed detail test shot. Zoomed in to pixel level you do get Noise and some excessive sharpeing.

This makes things sharper but with some detail loss. Compare to the 2005 Nikon Coolpix 5600 these plus and minus are obvious but this isn’t a straight fight as 2 years in the noughties is quite a developmental leap and although the Nikon wins it – the win is by a margin.

Generally the camera is on the money with focus but not every shot which is not so good as you’ll struggle to see the playback in bright light. It seems to be more weighted for central foreground objects. Focus is confirmed both in LCD area and by the LED by the viewfinder. The camera also warns you of shake risk in both of these too.

The colour palette is okay out of the box and you can tweak it heavily too in the menus.

So looking good for what it is. Sure it’s limited in resolution and there’s no stabilisation. It’s dynamic range is small and the metering can misjudge in complex lighting. But these are typical for a camera of this era.

Why I can’t recommend it is the sensor. When I booted the camera up I got some moire and colour shift. Thought it was just temporary thing but then this would drop in both on LCD and on shots.

Eventually it became permanent. I can’t use the camera now. And it tuns out there was an issue. This pops up as a frequent issue. ! 5 years ago Canon would happily repair it for free. But I doubt they would now (Hi could you fix my 17 year old second hand camera – not gonna cut the mustard and I doubt they ave the parts)

And that’s the big issue. For a 2003 camera otherwise it has nice features, good optics, incredible user control and a big sensor. But that sensor is the issue. The other issues are typical of the day (minor metering, low resoloution, short video time). It does over sharpen a bit for my liking on default settings but again no worse than rivals

So if you got a good ‘un yes this is alright if you can live with 4MP but you are taking a gamble. Shame.