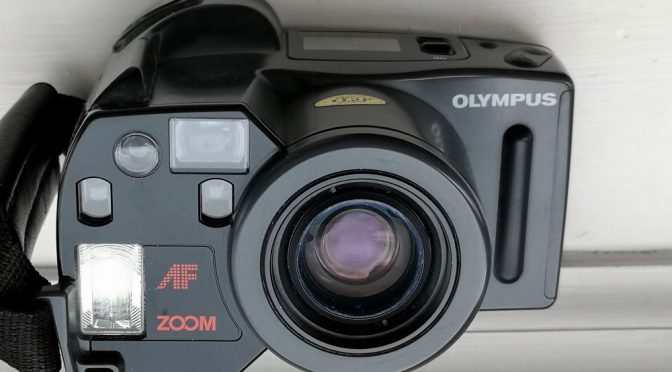 Once there was a legendary Japanese Camera maker famed for its detailed very compact cameras. But in 1988 they went very large with a camera with a passing resemblance to a star cruiser.

That camera was the Olympus AZ-300 Superzoom (aka Infinity Zoom 300 (US) and IZM-300). It would become one of the cameras that defined the term bridge.

Zooming to the Stars

So Pentax unleased the IQZoom, the world’s first AF Zoom in 1986. Olympus like many other makes quickly followed. The first Olympus Zoom (AZ-1) arrived in 1987 and was a conventional model of the time.

But in 1988 the AZ-300 arrived . It was one of several cameras that turned up that that the press just couldn’t pigeon holed. Sitting between an SLR and point & shoots, these were cameras that bridged the gap. And lo ! the Bridge Camera term was coined. We usually link this to SLR type cameras with fixed zoom lens but this and later cameras like the Canon Photura clouded things.

These early Olympus Bridges are so unlike anything else the company did. We know the AZ-4, a full SLR bridge was a joint project with Ricoh that gave rise to the better known Ricoh Mirai. So it’s possible Ricoh had a role to play with the AZ-300 & rarer revised AZ-330. The rest of the AZ series were much more conventional.

The bulk of the camera’s size is in part down to that 12 element lens. It was the first AF zoom with a greater than 100mm focal length. Seven years later Olympus produced another award winning 35-105mm zoom compact in the form of the mju 105 Zoom which is just titchy in comparison and comes with just a 6 element lens.

The viewfinder itself also adds to the bulk with a total of 6 lens elements. Showing a whole view more like a SLR, it even adjusts for parallax on macro shooting. It remains one of the most advanced viewfinders ever created.

However the AF & Metering is not TTL so any filters will require compensation. Interestingly the camera uses a Phase differentiation passive AF system like a AF SLR. Most compacts use active AF

This is bloody big.

The camera is plastic bodied but quite sturdy. There is a proprietary cap which covers both the lens and the viewfinder. The camera is designed to held like a camcorder with a strap for your right hand. This is a reasonable approach given the bulk but…

Sadly things weren’t exactly that thought out beyond that. You could easily hold this one handed but the toggle for the zoom is on your left. Olympus do recommend 2 hand holding but they’ve missed a trick. The viewfinder sits heavily on the right and if you use your right eye and have a average or big nose it doesn’t feel the most comfortable. There’s no diopter adjust.

There’s a LCD beside the on/off switch on the top plate. This shows the frame count but also the various modes. To the left of that is the zoom control and a button for spot meter. There’s a flip down cover just behind the LCD giving rise to 4 buttons controlling setting

Half depressing the shutter locks focus and exposure.

In subject mode the camera allows you to designate a portrait or whole body and in theory the camera will auto adjust the zoom. This does of course come with range limitations. At least there’s an infinity mode for long shots.

Compared to 90’s and later cameras this unsurprisingly a bit slow to start up and zoom out. Zooming out is speedier. The camera is as noisy as the next late 80’s for winding and zooming. The auto flash mode is reasonably good and doesn’t intrude as much as later compacts.

I found it broadly focused locked reasonably quickly. However the passive system struggles with bland subjects (like the garage door). This is an issue shared with early AF SLRs like the Nikon F-401.

The wide end is pretty peachy close up and has relatively minimal distortion. The garage door shots are pretty good wide fro a compact but things are soft on the tele end with some noticable pincushion.

Exposure is pretty much on the ball in most circumstances and you have the luxury of spot metering for complex scenes.

Like all AF Zoom compacts long shots can be an issue. In bright conditions with Faster (400 ISO or more) film, you’ll not really notice. But the landscape setting is handy with slower speed film as the camera’s focus tends to be short with long shots. I had hoped passive focus would help but no. Still the landscape mode does make a real difference.

Well I paid £2.50 for this before postage. The current L5SE average price including postage is £9.98. So you’ll have no problem picking one up for a few quid

This is a weird Cul De Sac of a camera design. If it were a true bridge it would make sense and granted it had the first 100mm plus zoom for a AF “compact”. But within a short period of time people were squeezing big zooms into more conventional looking cameras like the ’91 Canon Sure Shot Mega Zoom 105. The market sought more compact models although SLR type bridges were popular.

It is wonderfully over engineered with the state of the art viewfinder. With the lens wide the results especially close can be stunning and give SLR cameras a run for the money. However the tele end is lacking and the camera is limited against later rivals. Its a product of its time but the sure shot mentioned above makes more sense.

And whilst it is a very historic camera best left to the Olympus collectors. Not that it does anything wrong – there’s actually a lot to like. it’s just (a) massive and (b) there are better AF zooms.

If the bridge concept excites you Olympus went on to make the iS series of SLR bridge cameras which you can pick up for peanuts and are much better optically and ergonomically. However I’d also argue this is not the first bridge camera. Minolta made fixed lens zoom SLR for the 110 format beginning with equally spaceship like Minolta Zoom 110 SLR.

If early compacts are your thing, the Canon Sure Shot mentioned above is better too. Of course by the mid 90’s there were dozens of able and much more compact Zooms. My pick would be the Pentax AF Zoom but there’s loads more.

Mike Butkus’s site has the manual for this camera and the AZ-330 manual is still on Olympus USA’s site. Lomography, Cheap Camera Guy and Quirky Guy with a Camera have also reviewed this.