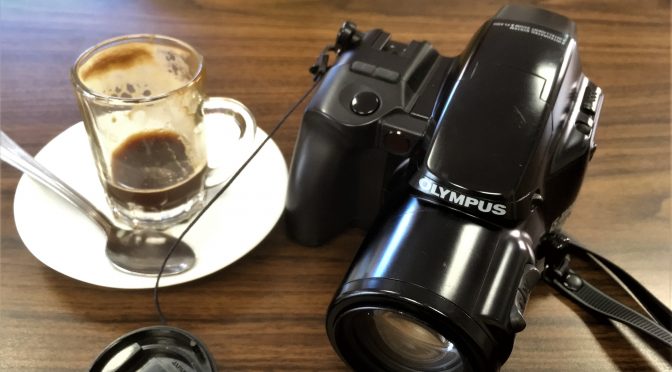 Want a step up from a zoom compact but don’t want to commit to a SLR ? Well the Olympus  IS-1000  might be for you. Costing hundreds at launch this  1990  bridge camera now can be bought for a tenner or less. But how does it compare to other compacts and modern cameras ?

The term Bridge Camera was coined in 1988 by Sandy Cotton an AP journalist. He used it to describe the new cameras that were bridging the gap between compacts and SLRs. The term was generally attached to AF Zoom SLR cameras like the iS-1000. The term has lived on into the digital era although digital bridge cameras. Interestingly Olympus preferred to use the term Zoom Lens Reflex (ZLR).

Olympus’s take on the Bridge

Unlike many rivals, the iS series of cameras actually looks like a SLR or a modern bridge camera. And using the iS-1000, you don’t feel conspicuous. And the rest of the series follow the same aesthetic. The iS-1000 would be followed by 3 other high end ‘thousand’ models (2000, 3000 and 5000). All of these cameras had cutting edge optics with ED (Extra Dispersion) glass as standard.  By and large the models are incremental improvements over the predecessor. However the last model  the  iS-5000, whilst having a bigger lens range, more optional features and better modes. actually end up with  smaller EV compensation  and no option for external flash.

Sold alongside were the iS  ‘hundred’ models. Cheaper to buy but had lower quality glass and more basic options. Key models include the is-100, 200, 300 and 500 although odd market specific models turn up. Data back (Quartz Data) versions were sold for most models  with QD, DLX or DLX QD designations.  Olympus irritatingly sold the cameras as the L series in Japan and as the iS in the USA with a different numbering system. So our iS-1000 was aka the iS-1 and the L-1000. Meanwhile the more basic iS-100 was aka the iS-10 and L-10 !

The camera is an interesting mix of an SLR and a compact in use. For a 1990 SLR it’s viewfinder is a stonker. Bright, big and with a clear in viewfinder display of shutter speed, aperture, focus lock and if flash needed as well as if in point focus mode. Unlike later models there is no adjustable diopter for eyesight setting  but you can buy diopter adjusted eye pieces.

All controls are by push button from the zoom toggle to even when you are focusing manually. If stepping down from a SLR or dSLR, this can be a bit of a jump initially. Luckily the layout is reasonably good. The zoom toggle sits on the lens barrel naturally positioned for your left hand in use. If you want to switch from auto mode or activate any of the settings you’ll do so by pressing a selector button around the rear large LCD or those behind a flip down door beneath. A toggle switch behind the shutter lets you move between options where relevant like aperture in AP (aperture priority)  mode.

You can lock focus and exposure by half depressing the shutter and you have the option of a separate spot metering button if you want to switch out of the default matrix ESP metering mode.

For a 1990 camera the options are pretty good. For common exposure modes thing are pretty good. Hold down the mode button on the LCD display and use the toggle to switch between Programmed Auto (P, default), AP (A) and Metered Manual (M) modes. The camera stays in these modes even when turned off. Below that is the EV compensation button which offers an incredible ±4 EV range. The iS-2000 on have Shutter Priority (SP) if that’s an issue for you.

The PF option allows you to switch to manual focusing (using the zoom toggle). All makes sense so far, so I guess the 4th button will control something like flash mode or scene selection ?

Nope.
It is part of the camera’s zoom memory system (allowing you to set the default focal length on turning on). Worthy but this requires the use of buttons located behind the pull down panel as well.

It is here you access the more useful other modes to control flash, macro photography etc. There are a good range of flash options (see later), portrait modes, various night modes (±flash)  and a continuous drive mode.  It lacks however a dedicated landscape or sports mode. The iS-2000 adds the sports mode and the iS-3000 gets a landscape mode in.

I touched on the flash in modes but that’s not the half.  This bridge camera’s unit out performs many SLR bodies flash unit. We have a TTL flash unit with a corking peak GN20. The camera uses an intelligent variable power (IVP) to adjust output and actually has 2 flash tubes allowing the camera to adjust brightness at both ends of the zoom.

If that ain’t enough you can seek out the legendary G40 dedicated TTL flash unit. Awesomely advanced & powerful even by 2017 standards,  It can be used in sync with the in-built unit.

A range of other accessories exist including screw on converter lenses (wide, tele and macro).  Of course you can also use conventional filters

The cameras has DX coding in single stop steps from 25-3200 ISO. Worth noting the camera has a fairly unique loading system to allow it to be narrower than a conventional SLR, which most of the time is fine but can be an issue if the film lead bends the other way.

This is an understated killer of a camera. You have a combination of a good TTL phase detection IR focus, combined with a matrix metering system (or optional spot or mode dependant centre weight) along with killer glass. For a x4 zoom, an aperture of  f/4.5 at wide which falls to f/5.6 on tele is pretty impressive compared to most compacts and comparable AF SLR lenses.

It is a brilliant shooter overall. I’ve used in low light conditions, night and on rare sunny days  and it has coped pretty well. This is a corker of a 16 element lens combined with accurate SLR IR assisted AF focusing and an impressive exposure metering. The zoom lens is pretty crisp at  most ranges maybe a bit soft at distance with the wide (yup a landscape mode would help) but actually not that bad. There is a bit of radial distortion (pincushion on tele and moustache on wide) but it is pretty good for a compact lens design.

Although a handy camera for street shooting, this is no compact and the AF Zoom is as noisy as a compact as unlike a AF SLR Zoom it is motorised. That and the focus time are reasonably good.

If you want to step up from a compact camera but don’t want the hassle of seeking out or changing lenses this could be for you. In fact it will out perform many SLR of its day with standard lens kits. Its main rivals come in the form of its own successors with the iS-3000 probably being the sweet point.

Sadly it isn’t frustration free. The compact controls won’t suit everyone. Loading is more fiddly than it should be and nor is this beast in anyway pocket-able and the original model’s controls can be irritating but…