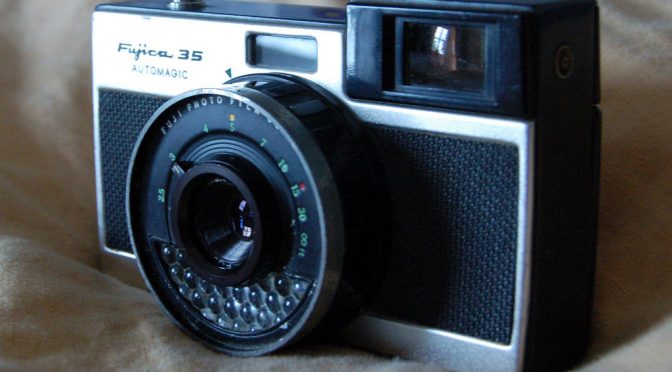 We leap forward by over a century and half.  Our subject is a lowly simple viewfinder from Japan. But this is one of  a new wave of innovative cameras in the late 1950’s offering automatic exposure.  It also represents an early hint of the shifting dominance of the camera market in the coming decade.

The camera in question is a Fujica 35 Automagic. At first glance, this is just a somewhat boxy  35mm viewfinder.  However it is one of the first cameras that offered fully automatic exposure.

But it wasn’t the first ! As we’ll see that prize goes to a brilliant but flawed camera that failed to catch on 20 years before. But first lets go right back in camera history.

The brain – the first exposure meter

Before the 1930’s if you wanted to calculate the exposure setting you did it either in your head or with help of exposure tables. There were devices that could help you but you still relied on your eyesight & brain. One type are the actinometers  which use a photo sensitive paper which you would time how long it took to darken,. That would give you a vlaue to then calculate the exposure. More practically and popular were extinction meters.  Essentially you look though a strip of cellulose that became increasingly opaque. A sequence of numbers are  printed on this. You determine the exposure from the last number you could just see.

But both of these still meant you had to do the hard work.  Luckily in the 1930’s things would change thanks to selenium.

Selenium was discovered as a by-product of industrial chemical production in 1817. It’s an interesting element similar to arsenic and has semiconductor properties.  But 2 other properties make it stand out.

In 1873 a chap called  Willoughby Smith  was using it in a test circuit for an underwater cable. He chanced upon the fact that Selenium  alters its ability to conduct electricity due to exposure to light ( photoconductor).

It can also be used with other materials to make a photovoltaic cells. These convert light into electrical energy.  Charles Fritts  first did this in 1884.  He placed a selenium layer between a transparent gold layer and and a copper base layer.  The electrical current produced was very small. It would take almost half a century to refine this into something useful to photographers.

James Ollinger suggest the first of these was the primitive and heavy Rhamstine Electrophot  of 1931. The selenium cell links to an ammeter which measures electrical current by a swinging needle. However the ammeter used was quite primitive and required more current than the tiny output from the selenium cell. Hence heavy and bulk batteries were used.

Not exactly practical but in just 2 years smaller battery free hand held appeared. These benefited from improvements in  ammeters which meant they could run battery free off the selenium cell. By 1932 Gossen and Weston both launched a smaller Fag Packet sized devices.

By 1935 Zeiss Ikon had put a selenium meter onto their Contaflex 35mm TLR camera. The meter wasn’t linked to the camera controls. This so called uncoupled metering became very popular until the rise of automatic exposure models in the 1960’s. It was used even beyond this with examples like the Halina 3000.

But in 1938,  a certain Camera & Film maker based in Rochester, NY upped the ante by getting the Selenium meter coupled to control the exposure.

It’s spec beyond this was pretty high end too. There was a  sharp 100mm 1:3.5 Tessar type lens. Eight shutter speeds were available for manual use (the metering would only work at 2 speeds).

It’s also quite revolutionary styled for the day. Other Kodak Six-20 folders of the same era looked positively antiques  from WWI not WWII era.  The super is quite futuristic, much more like a 50’s or 60’s camera. Kodak also coined the phrase “Electric Eye” which would become synonymous with selenium meters .

However it wasn’t a commercial success, just 700 to 800 were sold

At $225USD (about $4,000 today) it priced itself out of most pockets. It was also pretty unreliable,  acquiring the nickname “the boomerang”  due to the number returned for  repair.  Worst still,  for a film manufacturer, Kodak scored a massive design own goal. The camera’s auto mode was pegged to just 32 ASA  film. This was just at the point faster film came out. Sure you could have shot it in manual.  But given this camera cost half the price of a new car it was a big ask.

It would take well over a decade before other coupled metered cameras came out. In 1956 Durst launched the automatica. This was a camera that weirdly linked an selenium cell to a part electrical part pneumatic mechanism.  The camera allowed you to shoot either in aperture priority mode thanks to this or manual. Durst allowed its technology to be used in the 120 film Agfa Automatic 66.

But in 1958 cameras started to appear that would set the form for the next decade. And that’s where the Fujica comes in

The Automagic (which I fully review here) looks and feels like a prototype but it has a simple auto exposure system. At its heart is a simple scale focus 35mm viewfinder. But what sets it apart is the metering system. This visible in the half crescent selenium cell on the oversized lens barrel.

The selenium cell drove the metering which appeared as a swinging needle in the viewfinder. The swinging needle also locked the 2 shutter blades at the right aperture . It’s a primitive system with a single shutter speed but it works. The camera unlike the 1938 Kodak did adjust for different film speeds.

This is no polished classic camera.  But it did the job and was one of the first fully auto exposure cameras that became so popular. These early cameras would  lead to classics like the Olympus Trip 35.

It was also typical of a changing trend in the dominance of camera manufacturer. Traditional European and American dominance of the camera market was starting to erode. By the end of the following decade it would be the Japanese camera makes that would dominate.

Cameras with Selenium metered  had their heyday in the early 60’s. One issue is that selenium cells potentially can fail over time especially if exposed to light or heat.  They are also not very good in low light.  They also require more space than later technologies. Cadium Sulphate (CdS) cells which dealt with these issues would rise to dominance in the late 60’s.  In turn Silicon photodiodes would replace the CdS cells.

However Selenium has one advantage over both these later technologies. It doesn’t need batteries !

Oddly selenium metering lived on to the end of the century. Models were still being launched into the 1980’s with Selenium meters. These included the 1982 Olympus XA1 and the 1986 FED 50 which ceased production in 1996.