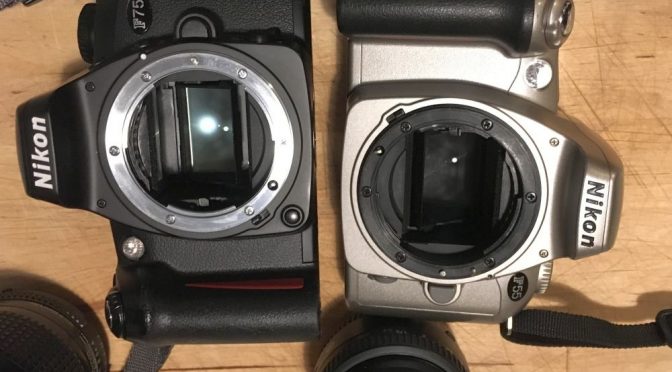 So I’d discussed the weakness of the F55 in the comparison review with the D50 dSLR. The F55 is arguably the cheapest Nikon film bodies you can buy but does spending a bit more snag you  a better camera in the guise of the F75. The reality is it a bit more nuanced.

In the end it depends on what lenses you have and what your expectations are.

A bit of Context

The short and technical answer is yes but I’ll challenge you to think about if actually you would use the pluses or could you get by with the F55 with a lens for example for the same price as a F75 body only ?

Where the F75 is better

Where the F55 is better

Cheaper
Can buy with lens for same price as F75
Lighter by 30 gms
Doesn’t beep
Erm…. that’s it 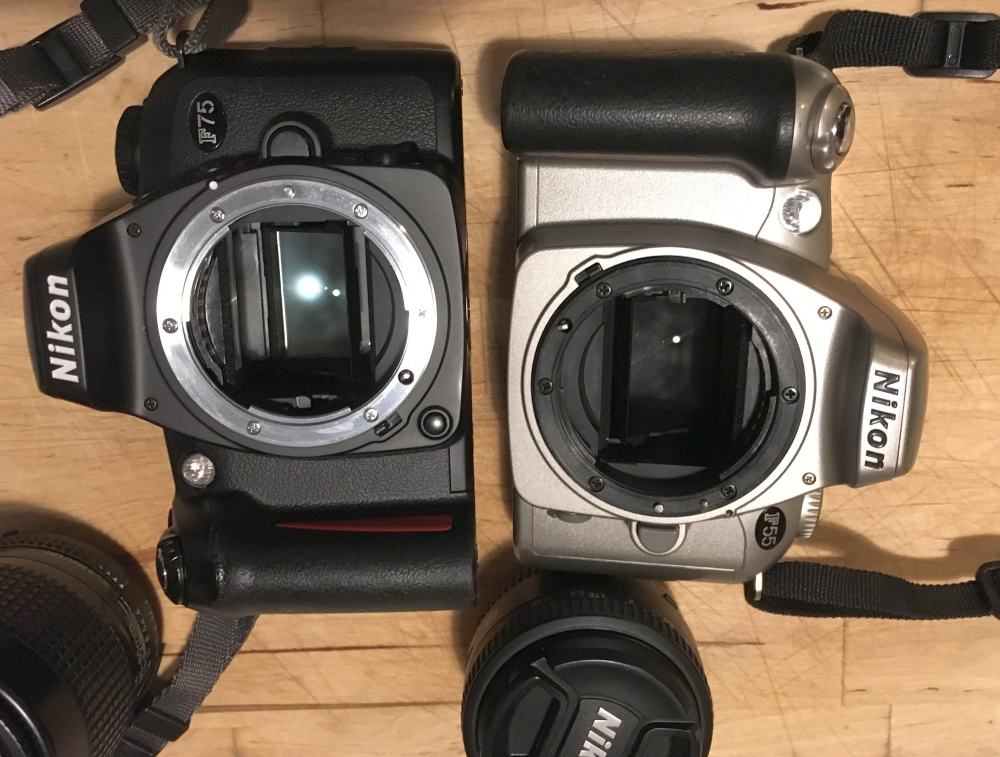 You can tell both cameras were made in the same factory as they are quite similar in appearance and build. Both have similar ergonomics and are reasonably logically laid out. The F55 has additional controls on the film door for the focus mode and a joypad for selecting the 5 focus zones. There’s also a switch on the left hand side of the top plate switching between single frame, continuous shooting and a Custom setting mode (CSM). CSM allows you to set various features from AF function and assist on and off although you’ll need the manual to program it as its done by selecting one of 12 setting and choices only shown by numbers in the LCD screen

There’s no denying the F75 is a tad faster when using the older (and cheaper) AF-D  lenses to achieve focus lock. That said you’ll struggle to notice a major difference. Similarly the matrix metering was pretty good on the F55 so gains are only minimal to the F75

That said it does allow you switch to spot meter or centre-weight anytime and there’s the lens support issues (it is much faster to lock with AF-S lenses). The DoF preview is genuinely useful although you’ll use it less than you think. External flash TTL support is also a boon.

The F75 kinda wipes the floor with the F55 here. Both are fine with AF-D lenses  offering full features support. Both cameras can mount and use Manual focus AI, AI-S lenses including the E series. However neither camera will meter with these meaning you’ll need to shoot in manual mode. Both offer rangefinder assist with some lenses which is just as well as focusing on their viewing screens manually is less than ideal. You’d need to look at the F100 to get metering support.

It’s with the newer AF-S class lenses that the F75 leaps  ahead. AF-D lenses were dependant on a motor in the body to focus. AF-S & AF-I lenses have a built in motor and launched in ’92. at the time of these cameras launch the AF-D lenses made tended to be cheaper and aimed at the consumer whilst most AF-S were high end. It becomes more of an issue as time goes on as AF-S lenses have largely taken over especially in the digital age. Many consumer Nikon dSLR don’t support AF with AF-D. The D50 was the last entry level model to support fully support AF-D.

The F75 works flawlessly with my DX  18-55mm lens (abet with some cropping at wide). My F55 doesn’t and DX lens support may be an issue (minor problem given you’re unlikely to use). Like almost all Nikon Film  SLRs and dSLR built pre 2013 neither supports AF-P lenses

The F75 is the better body by some margin and is easily worth the extra pounds. Neither is that expensive but if you have a a shed load of AF-D or MF lenses (AI or better) you’ll not likely find a massive difference unless you have certain requirements like needing to use external flash. In fact you can easily pick up F55 with a kit G class lens for about the same price as a F75.

However if you’re stepping back from a dSLR you’ll find the AF-S support makes the F75 a much better buy. It also has a proper metal mount and comes in black !!

Curiously this isn’t the first musing on these 2. In 2004  there was a discussion thread at ephotozine. Over at photo.net there’s a 2003 discussion of the F55 v F65.

* L5S = Last 5 Sold (eBay.co.uk) average price  (inc P&P) at time of writing. In this case only camera bodies that were sold are listed as used but working are included. I exclude cameras with ridiculous postage or overseas shipping. Cameras with lenses are also excluded even if cheap.