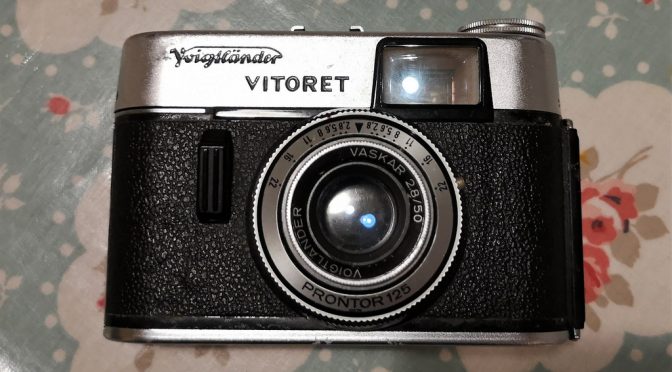 When I decided to relaunch the Poundland Camera Challenge, I was pleasantly surprised when 2 Voigtländer turned including this quite stylish but basic viewfinder. But sadly this wasn’t going to be a camera that even got to the test bed. The lens was Fungus central

You expecting a few non functioning or issues cameras to arrive in a challenge like this . sadly the Vitoret had the worse case of lens fungus I’ve seen this side of a Halina 35x.

The Vitoret series was Voigtländer budget range sold to compliment their more expensive Vito series. Over time 8 models were produced from this basic Vitoret to the Vitoret LR (coupled selenium light meter & coupled rangefinder). There was even a rapid film model.

This camera was the first in the series and the most basic with no frills. The camera is pretty typical for an entry level West German viewfinder with a prontor 125 shutter and a 50mm 1:2.8 lens. That lens is designated Vaskar and dates the camera to no later than 1966. That was when Voigtländer upgraded the lens to the Color Lanthar version.

And that’s really all I can tell you the Fungus was so severe optical quility would have been ruined and I really didn’t like the the though of leaving it around.

In fairness it wasn’t the seller’s fault. You couldn’t see the Fungus looking in from the front with the shutter closed

Classic Cameras has a reasonable review including a tear down of this camera for CLA. Thephotorenaissance also review this camera with a lot of test shots. Down The Road’s Jim Grey reviewed the LR version but wasn’t that impressed.

These cameras routinely go for a tenner or less on eBay.
I’d have loved to try out the lens but beyond that there’s nothing to seperate the camera from other West German cameras of the era. Also bear in mind you can get a Vito series camera for this price (and not that much more for a CLA’d one)