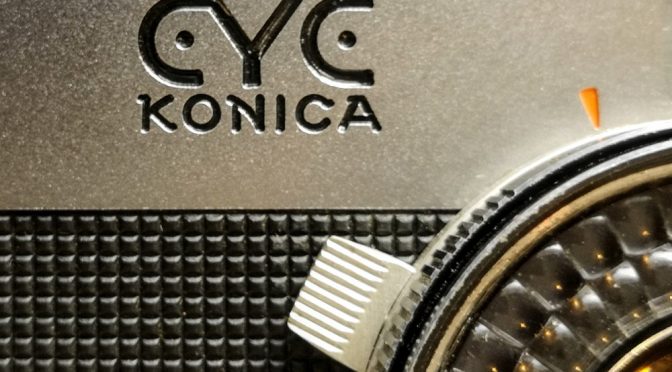 Although Olympus dominated the Half Frame market, they didn’t have a free run. Many a Japanese rival producing their take on the format. But only one is arguably one of the most beautiful cameras ever made. And that camera was the only half frame compact of that era to be copied by the soviets

But what made the Soviets copy her ? And why has it partially usurped my PEN EE-2 from being my favourite half frame ?

The EYE launched in 1964 at the peak of the half frame boom. In hindsight this was not an auspicious time to launch a half frame. The Rollei 35 an ultra compact full frame camera arrived just 2 years later. And a year after that Olympus would launch the legendary Trip 35. The public would increasingly switch to full frame compacts. The original EYE lasted just 3 years before being replaced by the updated but less charming EYE 2.

Konica had dabbled with the half frame concept before. The last of their original rangefinders the 1959 Konica IIIM offered an optional half frame mask. They were still releasing half frame cameras in the mid 1980s like the Konica Recorder/AA35.

But our EYE is earlier and slightly simpler affair. This is one of the most beautiful cameras I’ve ever held with exceptional build quality and attention to detail. This is the original version. It lacks any mount point for a flash. A second version exists with a cold accessory shoe as reviewed on Random Camera Blog. But that kinda ruins the styling for me. It’s telling that Soviet copy of the EYE, the FED Mikron which was made well into the 1980’s never added a flash mount. Worth noting the EYE was sold in the US under Wards branding and the Wards EYE is slighty rarer. I’ve only seen versions with the cold shoe.

The camera was updated with the later EYE 2 and EYE 3 which have CdS metering & 32mm 1:1.18 lens. But once againthe styling just isn’t quite up to the original.

EYE to the Detail

The camera has an ISO range of 10-400. This is set via a small dial to the rear and displayed on the top plate.

The core spec is a viewfinder half frame camera. The 30mm 1:1.9 lens is over a stop faster than the obvious PEN EE-S rival. It’s made up of 6 elements in 5 groups and is almost but not quite a double guass design. The lens is scale focused but is notched into 4 zones (1, 1.5, 3m and 10m+). Those 4 zones are shown on the left side of the viewfinder on a needle meter.

On the exposure front the camera has full automated programmed shutter in A mode. Metering like the Olympus PEN EE cameras is provided by a selenium cyclops array. This feed the setting of a Copal B shutter which offers an aperture range of f/1.9-16 and shutter range of 1/8-1/800. I’m guessing this is in matched pairs like later Konica compacts. A needle match shutter speed meter is on the right of the viewfinder like the later Konica C35.

You control exposure via a ring behind the focus ring. By and large you’ll use it set at in A (auto) but there’s a Bulb setting (at f/1.9). You also have the option of setting a fixed aperture for flash with a fixed speed of 1/125 1/25. Unlike an Olympus PEN EE camera, the metering is totally disconnected in aperture mode. This means the aperture will open to setting irrespective of light, giving you a manual mode.

The body is incredible. It’s fantastically engineered and styled with an attention to detail I’ve seen on few cameras. The logos are engraved and perfectly finished. The rewind knob is wonderfully designed so it sits flush and covers the film compartment release.

Loading is pretty standard with the typical 60’s & 70’s set up. Like most Half frame cameras the format means you’re shooting in portrait mode if you hold conventionally. This makes it easy if you’re converting to film from a smartphone camera.

It’s quiet in use – just a soft click with the shutter. The viewfinder has bright lines and the 2 sets of needle meter displays. Film advance is via the mechanical lever.

I was expecting good things but I was actually blown away. I’d made it hard – loading the camera with slightly expired Agfaphoto APX100. This a 100 ISO film which pushed the lens wider and shutter slower. I also don’t find it the most forgiving.

Despite that I got 78 usable exposures back from the roll. This camera is on the money for exposure for the limitations of a 1960’s area meter. Yes, It maybe didn’t give me quite the results I had wanted when I pushed it with backlit subjects. But I still got usable images. i deliberately didn’t compensate using the Film speed dial but you have that option.

And focus wise the lens is pretty good. I opted for individual half frame scanning and I’m glad I did. This is pretty sharp in most shots and tolerably so in the rest and I suspect it was my ineptitude of mis-focusing a lens fairly wide open.

That said it did well even at low speeds with the lens open. There’s almost a bit of Bokeh going on but not enough to describe as a feature. The lens is about average with flare for a compact of the era. Not disastrous but not great and not enough to appeal to the lomo crowd.

It does well at long shots. This was a joy after testing a run of good AF compacts which softened towards infinity.

The camera is so good that the main limitation in resolution is the half frame format. That said I could easily use these shots up to 7×5″.

We’ve mentioned the Olympus PEN EE series cameras which included the focus free EE cameras & the zone focus EES models. They present an interesting choice. With Tessar lens and a simpler but very effective exposure system designed to keep the aperture tight. They are much more widely available. The Fujica Half and Canon Demi series of compact cameras offered uncoupled metering. All have slower lenses.

And of course there’ s the Soviet Hommage/blatant rip off – the FED Mikron. Now the FED is actually quite good but the build quality and design just doesn’t quite match the the EYE.

The cost issue (Buying & living with it)

These are not common. Currently there’s no UK ones on sale and your only option is usually to import form Japan. That adds that roulette wheel of import taxes. Collectilblend suggest a mint one sells around $180-200USD. That’s double what you’d pay for a mint PEN EES-2 and about $20 higher than a mint orginal EES.

That said I paid about ~£51GBP inc P&P from Japan. I got a very nice example that came with original strap and cap. I also got lucky with the roulette wheel of import taxes too. So I can’t grumble as this was steal at the price. Or so I thought.

Turns out a week or so later an unlucky Austrian sold his working ‘OK‘ condition one. It sold with a lens hood and a UV filter for just €1.50EUR . That said this is rare.

A handy hint is watch out for people mis-listing as the Konica CYC. This is due to stylised design of the E on the engravings.

In terms of issues the selenium cell is potentially the weak point. That said I don’t see many listed as non working. Half frame is a frugal format. I got 78 useable images off the roll of APX100. However many labs charge a surcharge for scanning half frame now or scan full frame (2 shots often slightly cropped). The former is definitely worth it and it’ll still work out cheaper than scanning 2 rolls of 35mm.

This is a gorgeous camera with a good lens. It’s a joy to use and one of the most well built cameras I have ever held. It’s obvious weakness is you’ll need a Flash bracket to use with Flash. But it’s telling that the Soviets copied the original EYE not the cold shoe toating Mk 2. Trust me you’ll live with the limitations.

So will it replace my trusty PEN EE-2 ? Not quite and that’s no fault of the EYE. The PEN is just that bit more compact and is much more a P&S. You don’t have to think about focus and the nifty but simple exposure system keeps the aperture tight. The EYE wipes the floor with it a lower light levels. But the EE-2 is just that bit easier to use as a quick shooter in brigher conditions. And yes using it with flash is no big deal.

So the PEN remains my routine half-frame carry when travelling. But the EYE will be out when I have more time and have to deal with more complex conditions.

It is however quite the most beautiful camera I’ve held. It’s not cheap but worth it if you’re a half frame fan.