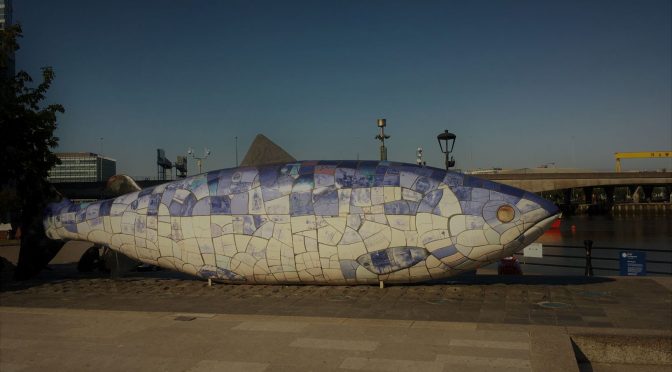 Apols for the delay here. As you might recall the golden fortnight is the 2-3 weeks that the Scottish schools get off before their counterparts in England . This year was a corker due to the weather. The scorching weather continued as we headed off properly on Holiday over the seas to Belfast.

Bigger trip so bigger gear. However the bag still had to be light enough to lug around so 3 cameras and phone were in order

We’ve seen the film cameras both before. The Olympus is a true classic and of the best loved and know compacts of all time. . It combines a simple but effective exposure system with a legendary sharp 4 element lens. A full frame refinement of the PEN E cameras, this de rigeur for any top ten film camera list.

If you think it sounds simple our old Superheadz VUWS clone is even simpler. I’m a huge fan of this tiny plastic box with a fixed plastic lens and no controls. Pure point and shoot lo-fi fun. 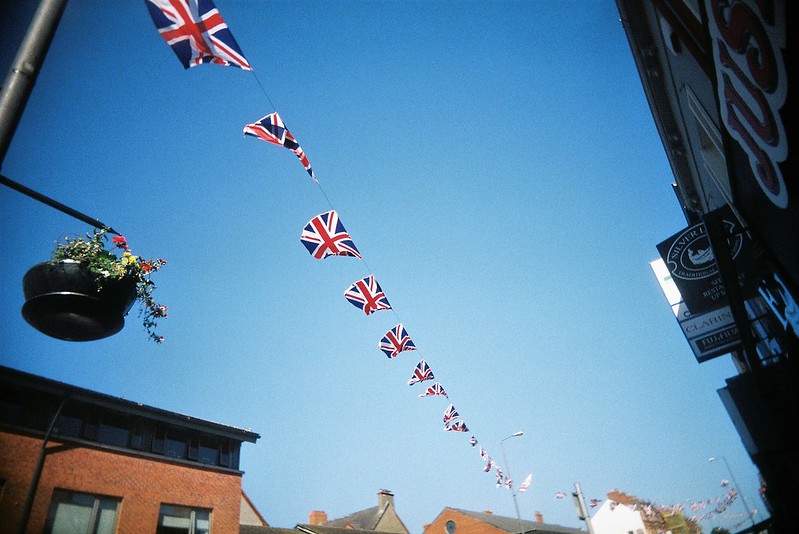 The Lumix G2 is  a digital MILC  workhorse of a few years back. It improves in several ways over the original G1, the camera that introduced us to CSC / MILC  cameras.

So it was 3 nights in Belfast by Ferry on foot. The Ferry came courtesy of Tesco’s clubcard points so was almost free thanks to a years worth of shopping.  We sailed from Cairnryan just north of Stranraer and left the car behind at the terminal. As short Taxi ride took us to our AirBnB to the east of the city center.

We arrived in the middle of that early summer heatwave we had this year. Belfast was shimmering in the heat with a hose pipe ban on. In hindsight I wish I’d packed a CPL for the Lumix and arguably the Trip 35. We took advantage of the Belfastcitysiteseeing.com tour bus service which crucial gives you a 48hr ticket and covers the main tour sites.  Only issue we had with the service is the upstairs speaker on the open top bus were a bit hard to hear.  From a photo point of view you’ll end up on the wrongs side often enough (IMHO  the right side is probably better to sit on). The 48hr ticket meant we didn’t need to rely much on the otherwise good local bus services.

We came in early in July. If you’re from the UK you might have picked up on the potential fault. The days of the troubles are pretty much behind for Northern Ireland but the 2 main communities still like their parades. These days these might give you more hassle getting around than anything else.  July is a key period for the Unionist parades. Luckily we weren’t really affected but there was a heck of a lot of Union Jack bunting out near were we stayed.

So how did the gear perform ?

The film cameras performed as you’d expect but I ran into a niggle with the VUWS. The camera is not a fan of 36exp film – both the manual warns against it and each time I’ve had to use some the camera protests even more. I’d ran out of much colour 24exp and this meant the camera got stuck mainly with a few rolls of 24exp BW400CN.

That’s not awful but B&W shots kinda work best with the VUWS on close targets.

The trip had no such issues. I’d not used it for about a year but it was a joy to shoot again. For daylight shoot it’s great, but on night shooting or really dark days a compact with a longer exposure option like the XA2 or LC-A becomes more handy.

So on to the digital…. 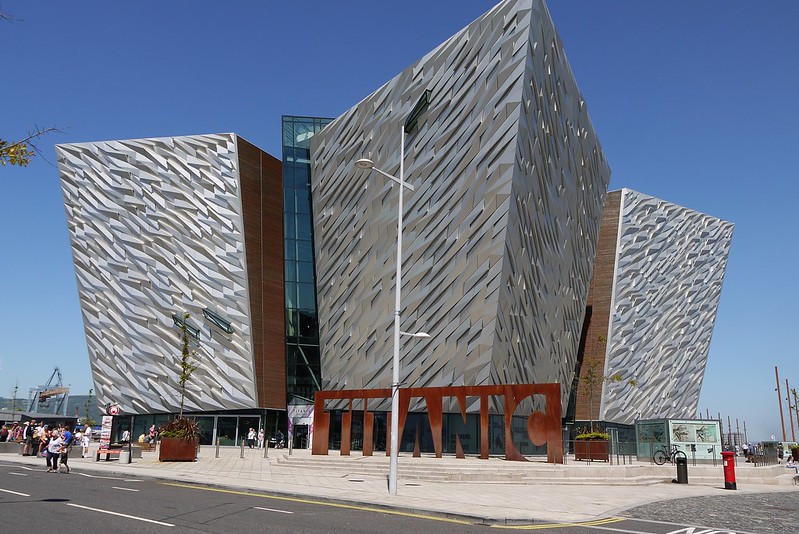 Well the Lumix was fine whilst it lasted.  We didn’t really use it for video and the flash was hardly on but I got a measly 235 shots before it died (Yup I’m a bracket shooter too so that really meant in the region of nearer 100-150  shots). This is still way below the oft  quoted 360 stills but may reflect (a) a well used rechargeable battery and (b) I pretty much left the camera in the on position.

In some ways this was just as well (the camera died in a day and a half) as lugging it with the others was a a pain. The point of the G series and most other MILC cameras were to be smaller more compact than bigger DSLR. They’re still a chuck of camera even if they are much smaller front to rear and allow for more compact lenses (my F55 and F75 bodies are not that much bigger bar distance from mount to rear). It would be fine as the only camera you brought (just take an extra battery) but not one on a multi camera loadout. 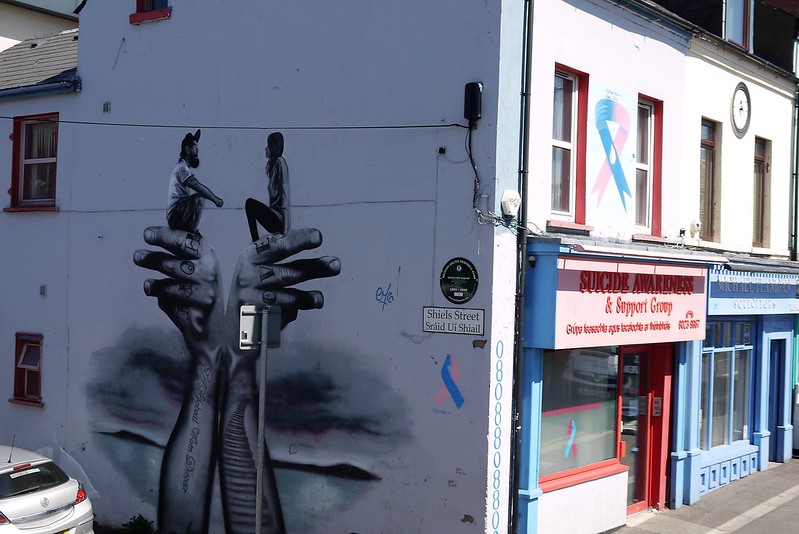 That said it is an incredibly competent camera which will give most budget dSLR a run for the money. The range of options is huge (the manual is well over 200 pages)

So near so phone

The digital compact market is pretty much annihilated by smartphones like my iPhone and it’s not hard to see why. The 1/3″ sized sensor here seems pretty old hat compared to bigger compact cameras sensors (1/2.3″ is pretty common now on budget end). But this is a Sony Exmor RS 12MP back illuminated CMOS sensor.  It’s not cutting edge (the same sensor debuted on the iPhone 6s) but still runs ahead of many a budget and mid range phone on the market today. Crucially it will happily hold it’s ground with cheaper compacts bar the lack of an optical zoom. And you know it even gaves our G2 a run in non complex situations.

A great performer in good light but whilst it has the sensor from the 6S but it didn’t get the optical image stabilisation. You won’t notice in good light but in lower light things start to soften  With the default software the camera seems to often sit at around 800 ISO in low light but can go to more than twice that. Bear in mind the camera has fixed f/2.2 aperture so any exposure changes need to made by adjusting the ISO or shutter. The default app is fairly competent but control freaks you can download full manual control apps. The camera’s focal length is equivalent to a 29mm lens on 35mm camera so quite wide.

Belfast is  a modern, vibrant but very compact capital. It’s an architectural photographer’s dream with its mix of historic and new buildings. There’s a also a great sense of history to the place which to large extent has shaken off the troubles. Although you’ll still find reminders of those darker days. But the street murals now feature a mix of the old sectarian lines but new work too.

The modern Belfast is in someways best envisioned by the Titanic Centre.  Even if you don’t pay for the exhibition, it’s worth a visit for the views alone. Worthy too is Victoria Square. Irritatingly when I went the temperature meant the Dome which offers panoramic views of the city was shut.

Visitbelfast has a list of 12 sites to visit for photos which is definitely worth a gander. Belfast is also a great jump point to the rest of Northern Ireland and parts of the Republic of Ireland. One option to consider if in Belfast for a few days is a Games of throne tours. Even if you’re no fan of the TV series, these will take you out to key sites like the Giant’s causeway. 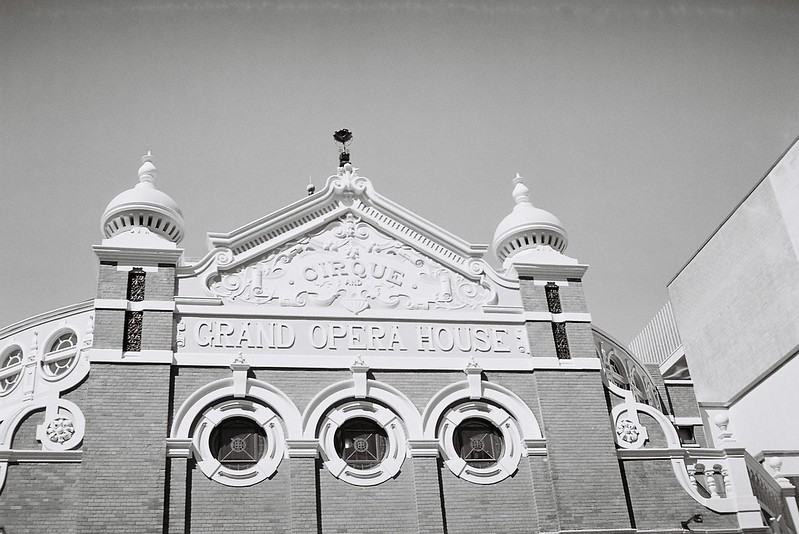 One thought on “Shooting in the Golden Fortnight Part 2- Belfast”