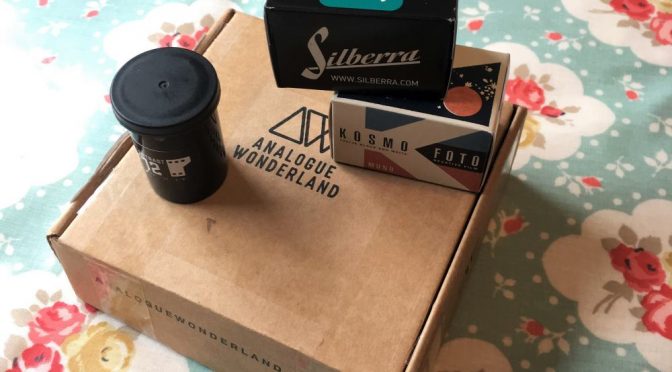 Those nice folk at Analogue Wonderland a wee press sample pack arrived last week with 3 very interesting and different films in the box. I’m quite excited and 2 of the 3 are waiting the lab but the third is more of a challenge.I’ll hopefully post soon about those first two roll once they’re back from the lab. Analogue Wonderland have kinda burst on the scene in recent months. With a fantastic range of eclectic films and whilst they’re based in the UK, they’ll ship world wide (for free if you order enough !!). They stock over 180 films and like to champion the small independents although they have a good range of the big brands too,

What they sent me are 3 quite quirk films

The Folks behind Silberra have been providing chemicals for analogue photography for over a decade. In  2017 following  a successful Indiegogo campaign they launched a series of panchromatic B&W  films that were well received for their classic looks.

The Ultima is a continuation of that model but using a thinner base material in theory better for scanning.

I’m a big fan of the Kosmo Foto blog and Stephen last year launched this film (2017 was the year of the blog film it appears – sadly no Canny Camera Chrome mind !!). Made by a biggish manufacturer for Stephen (there’s some debate as to whom that might be). It too is Panchromatic B&W film. More grain than the Silberra from what reviews I’ve read but with great contrast.

A little is more known about the emulsion here. This is based on  Kodak Kodalith stock film a long ceased production orthochromatic B&W film. We’re looking at intense Contrast but the challenge is that it’s rated at just 12 ISO. This will be a fun  challenge to shoot in the wet Scottish Autumn !! Bretz is a film project intent at bringing interesting but affordable films to the market. The films don’t seem to hang around for long

I’ve already shot the Silberra and Kosmo Foto so we should have the results back soon. Thanks to Analogue Wonderland for the chance to try these out !

2 thoughts on “Look What the Postie brought – New Film to Test !”