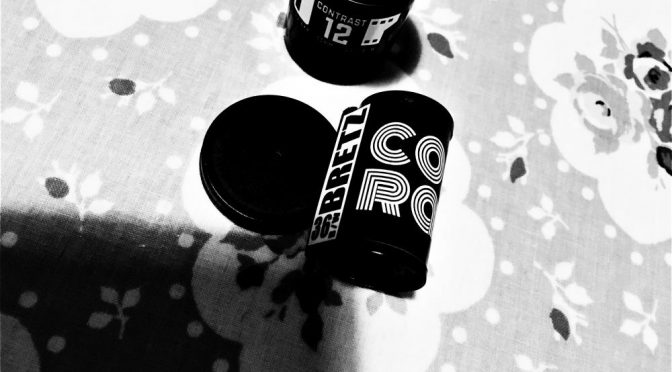 Of the 3 films that the nice folk at Analogue wonderland sent me. This has been the  hardest to shoot and the oddest results of the three. This a bit of a Jekyll and Hyde film and I’m still not sure what I think. And that’s a bit to do with me goofing with the gear.

The other 2 films analogue wonderland sent me  (kosmo Photo Mono and Silberra  Ultima 160) both were fine films and easy enough to shoot. This is an another kettle of fish.

Bretz is one of the Boutique film brands to pop up in the last few years. What sets it apart is its goal to “giving the analog photography community equipment and film without charging them the high prices that is normally asked”. Henry Bretz is behind the brand and you can catch him on a recent Sunny 16 Podcast. 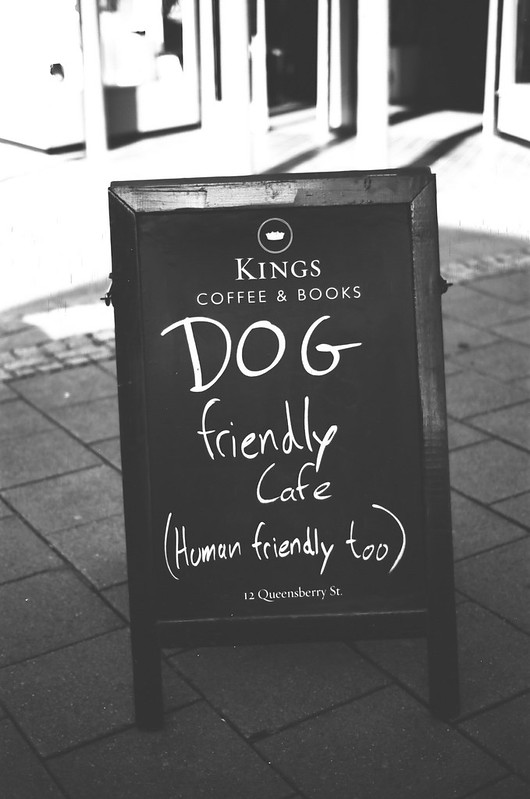 Bretz Contrast is a limited run film like all Bretz films. Analogue Wonderland act as their main distributor.  It is based on Kodalith stock. In hind sight I wished I’d read more on this and read it’s technical sheet before shooting. It is a orthochromatic film with as Kodak puts it extremely high contrast. Intended for making line and halftone negatives for photomechanical reproduction. Sadly it is long deceased in production (the last variant ceased in 2002). That date is important as it was rated 12 ISO back then. Bretz rates theirs as 12 ISO which implies that the Bretz contrast must have bee seriously fridged or is a an optimistic guess ! 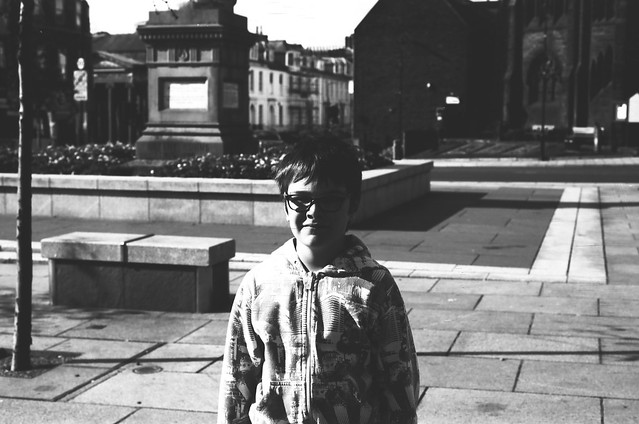 12 ISO was gonna be hard to shoot as many auto exposure cameras don’t shoot that slow. This is compounded by it not being DX coded. I had a Choice between shooting it on my older manual focus SLR like the Nikkormat FTN or Ricoh Kr-5. What I decided to shoot it on was my Nikon F75. 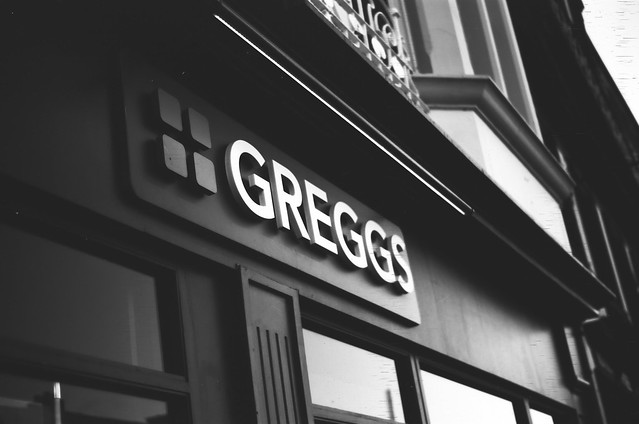 The other 2 films had been shot on the F55 with the f/1.8 50mm Nikkor lens and I wanted to keep things fairly similar. I’d ben testing the F75 and was happy it was working whilst shooting those 2 rolls. Neither the F55 or F75 allow you to manually set film speed. If there is no DX coding they default to a 100 ISO setting. Both have EV compensation but only the F75 offered  ±3EV allowing me to set a t +3EV to match for about 12 ISO

In hindsight not such a good idea.

In bright light you do get that striking contrast effect 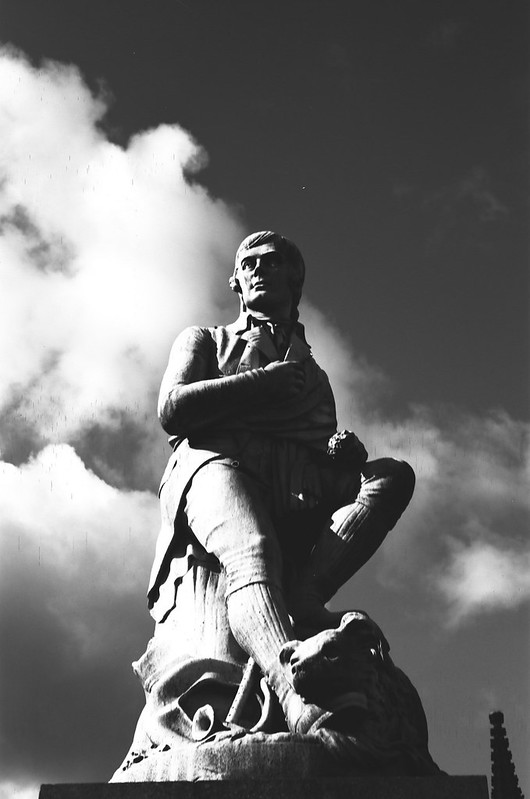 Skies look like you’ve had some heavy red filter on. There is pretty limited grayscale gradation. But hey ! I guess that’s what we’re looking for. The blacks are really black. You’ve also pretty limited exposure latitude which adds to the underexposed feel. It is very fine grain as you’d expect from a very slow speed film.

In lower light (at 12 ISO this equals wide open lens)  things are quite different with much more gradation. 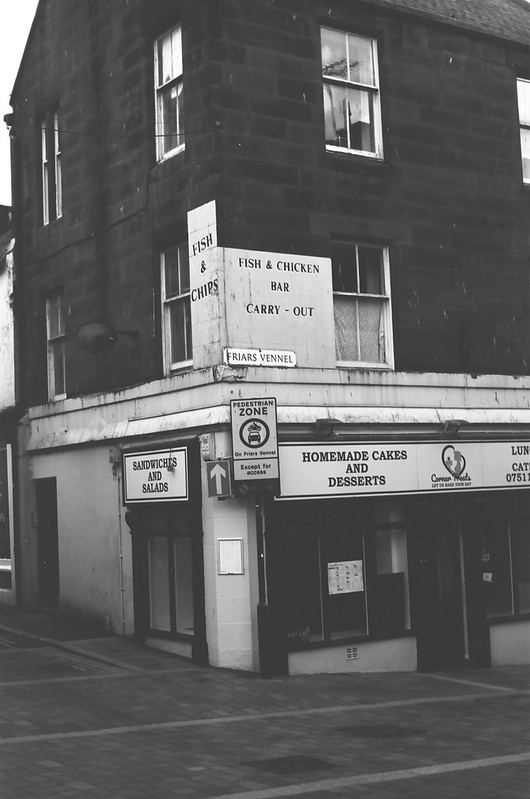 Okay not quite the same as a slow speed panchromatic B&W but actually not that different from a higher speed film (although with less grain and  more colour bias). However this isn’t where things are at.

Colour Bias is the norm with Orthochromatic film. They’re intended to be used in darkroom with red light on. Not surprisingly the reds render almost jet black 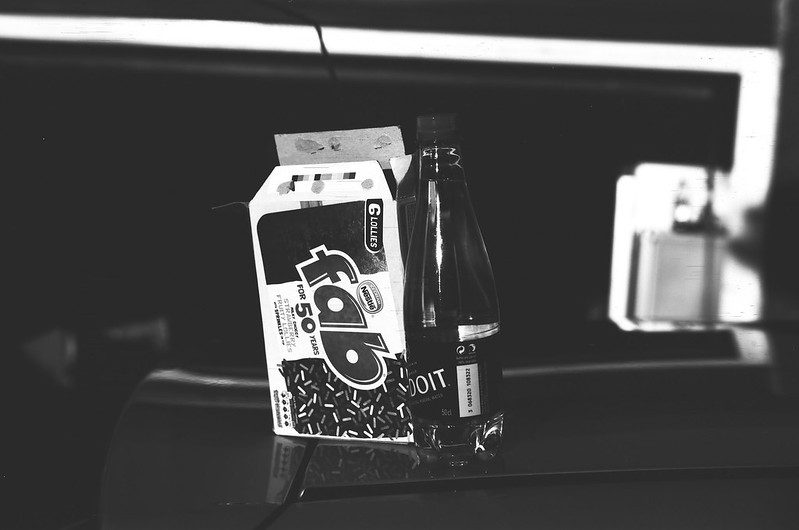 Not so good if you live in a town where red sandstone is one of the commoner building materials !

The high contrast and colour shift makes the results look underexposed at times. Then again that might have simply been underexposure as I’d pushed the Nikon’s matrix metering system out of kilter assuming I was trying to seriously over expose some 100 ISO film. If I did it again I’d use my Nikkormat FTN with the Nikkor-S f/1.4 50mm.

I’ve not shot a lot of Orthochromatic film in recent years. The colour bias is an issue for me living in a town where red sandstone is pretty de rigueur . Ferrania P30 although listed as panchromatic is alsoquite biased this way. 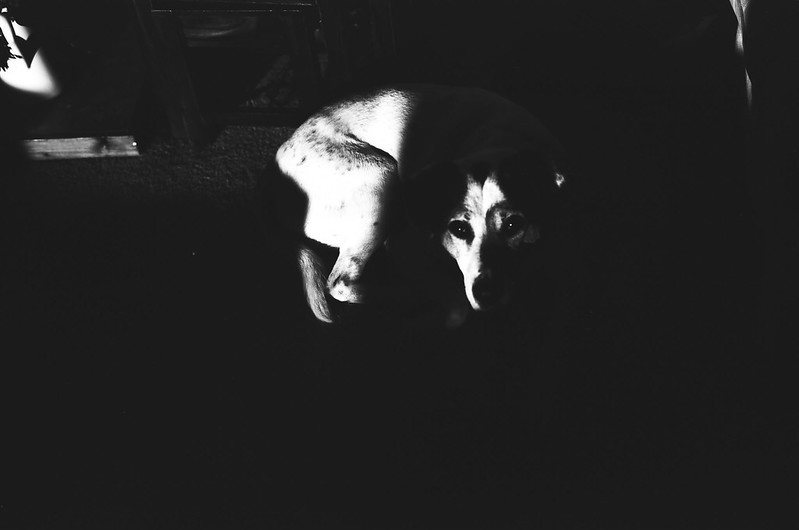 There were other issues. The film seemed to have scratches on several frames. As usual I got AG Photo lab to develop (all shots are as they scanned at medium JPEG resolution). They’re a pro outfit and whilst I get the odd scratch or mark as you can from any lab. I processed this with another B&W film (APX100) and several C-41 films and this didn’t happen. I also only got about 33 shots on the F75 (Most 36 exp rolls manage 35-36 on this) 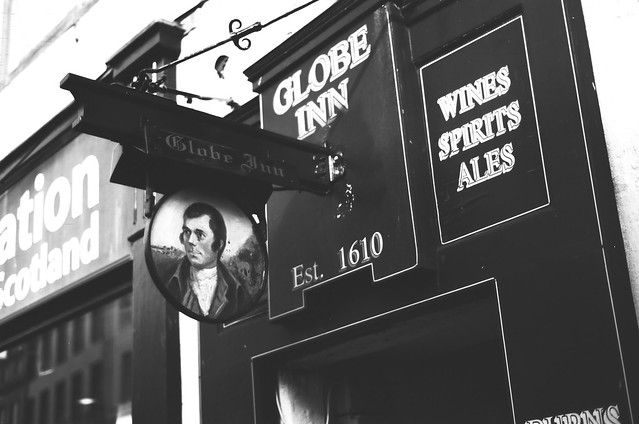 I’m intrigued by this film. Boy does it do contrast and does some of the deepest black I’ve ever seen from a film. But it needs some careful handling and isn’t something you can load and shoot without thinking. This means it wont be a workaday film and there may be some quality control issues.  I’d recommend shooting it with a SLR that you set the ISO and a fast (f/2 or wider) lens.  In even bright sun you’ll need to open up to f/5.6 to get 1/125.

Bretz contrast and a load of other interesting films can be sourced from analogue wonderland. At the time of writing if you sign up for their newsletter you’ll get 5% off.  They also ship worldwide. Thanks to them for letting me try these 3 films.

Film as processed and scanned by AG Photolab without any post editing. Scanning as per the other 2 films was at their medium JPEG setting.