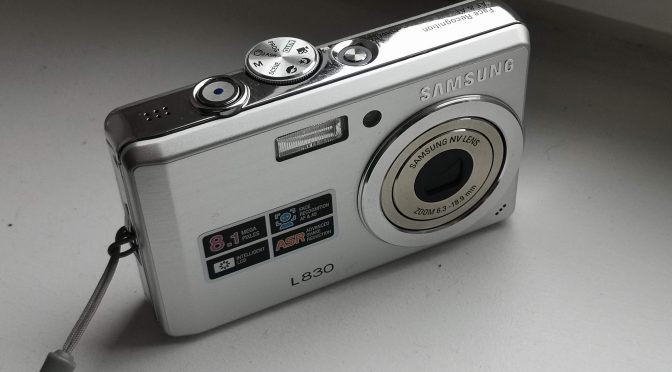 By 2008 film was no longer King and you had massive choice of digitals to pick from. This is an era when some defining digital classics were made. This is not one of those. Not that the Samsung L830 is awful. It’s just decidedly average

Photographically Samsung nowadays is best known for its smartphone cameras. But until it’s withdrawal from the standalone camera market in recent year, it was a major player. It was quite literally nipping at the heels of Nikon for 3rd spot in the camera market.

It along with Sony and Panasonic became the successful new kids on the camera block outlasting other consumer electronic companies like HP and GE. Samsung had a better start than most as it had already diversified into the camera market when Film was still king. This included their rarely seen SLR

Now that wasn’t a great success but Samsung had more success with 35mm compacts like the AF 105 XL I reviewed a few years ago. It also gave them a grounding in camera design

In the Digital era, they produce a vast array of compacts, a few little known K mount dSLR and the well recieved NX compact system camera cameras before they left the market, I suspect being the biggest smartphone maker in the world they could all clearly see where the consumer market was going.

Oddly this reminded me of the AF 105 XL. Both are of their time just average,

It notably offered face recognition, image stabilisation, 1600 ISO and manual mode. Video mode can do 800×592 at 20fps (30fps with 640×480). that is higher resolution than older cameras which offered VGA resolution but is a weird format.

The camera TTL meters and uses a multi-segment matrix exposure evaluation system. If you want you can use a spot metering mode. The shutter speeds range from 1 sec to 1/1500 in most modes but you can go as slow as 8 sec in manual. Samsung honestly list the aperture range which I find few makes do with digitals. it isn’t great with less than 3 aperture stops range (f/3-7.7 at wide and f/5.6-14.1 tele). But I suspect that better than many cameras of the day and but better than some. EV compensation is available in some modes,

Power is by a lithium 900mA rechargeable battery. This is removable but Samsung provide a USB cable with a propitiatory connector that you plug into the base. This connection I’ve seen on other Samsung Digitals of the era and makes me think it might relate to an earlier charging station. You can buy plenty of 3rd party chargers which don’t need the camera to be plugged in. The battery is adjacent to the SD/SDHC slot. The manual indicates only guaranteed up to 4Gb cards but I had no issues with a 8GB Verbatim SDHC card in my tests. There’s 10MB onboard memory which will struggle to hold even a couple of full resolution shots.

Screen is actually alright a with a 2.5″ TFT LCD with 230K pixel resolution. You can set it to auto adjust to light and is okay in brighter light although like almost any compact it will be hard to use in very bright light. There is no optical viewfinder.

This is a compact plastic bodied camera with a brushed metal body with chrome highlights. So basically it looks like your average late noughties digital nicking the styling from the early Canon Ixus cameras. It look quite stylish and well screwed together.

Layout on the rear is typical and on top there is a on/off button, mode dial and shutter. A rocker switch on rear controls the zoom

It’s light but there is no grip really bar a token thumb one on rear,

The command dial on top moves you between 8 modes. You’ve your usual auto, program, video, night & portrait. You also have a scene mode with 9 selectable option (e.g. fireworks, snow/beach, landscape) and manual mode & image stabilisation (ASR). Manual gives you the ability to control both shutter and the aperture although the former has such a small range. You set your values using the Fn button on rear and then the joypad. Half depressing the shutter brings up a EV bar showing you how far off 0 you are but only shows up to 2+/-. It’s a novel idea but clunky and takes time. Double click Fn and you get your usual choices.

ASR (advanced Shake Reduction) uses onboard electronic measure to stabilise shots. But it take a lot of processing time for each shot and they can look a little over processed. This isn’t helped as the camera will naturally increase ISO which is logical but not great here.

Essentially there are 3 menus on the go. For in shot control you’ll hit the Fn button which depending on the mode you’re in allow you to adjust resolution, image quality, White balance, metering, drive, ISO and EV. There is no RAW option but that’s pretty standard.

The menu button in the centre of the joy pad sets most of the background stuff like time, formatting card etc but also allows you to adjust AF between centre and multi point. It allows you to control shrapness and contrast.

Then there’s E. this allows you to shoot with various Colour filter which are pointless largely bar B&W but also set your own colour profile. would have been nice if they had some included presets like RGB or emulation modes. You also have the option to add a frame or weirder still blur your shots

As I’ve said this is a light camera that lacks grip. Control layout is typical. The boot time to be able to shoot is around 6 seconds and includes a weird guitar noise (you can turn off). There is quite a bit of lag and you have to wait a while before the next shot. I’d prefer a side to side rocker for the zoom but others do like the vertical one it has.

Half depress to focus lock. What is neat is this camera has 3 ways to tell you focus is all good. On the screen the focus box goes green, there a distinct beep and a green LED to the top right of the screen comes on solidly. If not in focus the focus square goes red, the beep is different and the LED flashes. This will be handy in brightly lit scenes.

You’ve a button to turn on and off face recognition on rear. The usual choices around the joypad exist allowing you to adjust flash settings, turn on timer, playback and macro mode . In Macro you can focus down to 10-80cm on wide (50-80 cm tele).

So the good news. The camera’s exposure system generally works well enough in daylight. As light levels drop the camera will push to flash use but actually is capable of low light shots

But it ain’t perfect. It tend to overexpose. the next shot was illuminated by the fairylights above but looks like it has been well lit.

Turning on ASR is a mixed blessing sometimes it works well although you get images that are much more processed but here it did this to the same scene with same lighting.

Not only is this grossly under exposed but bizarrely the ISO drops – go figure ! That said i think it is a bit less shaky. In fairness it usually is a tad more helpful but you’ll find your images suffer from more processing and the effects of higher ISO noise.

Going the other way into bright light, this has some flair but this isn’t awful. Flash is generally well judged and and good for your average “nite oot” photos but red eye is an issue. So above average there. Bera in mind you only have a couple of meters range.

AWB works pretty well however except under some warm temp LED lighting in lower light levels – the actual colour shift is seen but not compensated for. I kinda like this. Expsoure tolerance is better than 2005 cameras I’ve tested.

AF is actually alright at focusing in targets. It is helped by the depth of field – f/3 might sound pretty wide but on such a small sensor and short focal length makes that aperture equivalent to about f/16 on a full frame camera. Take the shot of the Devorgilla Bridge below.

The full frame image looks reasonably in focus from the gum on th ground to the spires in the rear and this is on f/3 !!! Effectively the hyperfocal distance on the wide end with f/3 is around 3 meters !!! meaning if you focus there everything will be in acceptable focus from a meter and half to infinity !

The wide end is that bit sharper but you trade with some barrel radial distortion. There isn’t much fall of in image quality going to the edge which is commendable. It copes well with distance shots even in standard mode but i suspect the aperture helps.

The problem isn’t the focus it’s the noise. You don’t notice on the images until you zoom in but the lens suffers from fringing and the processing noise doesn’t help. it notably gets worse in ASR which is what you’d expect but also as the ISO rises

It is better than the 2003 Canon Power Shot A80 but not that much especial given the double pixel density. Push the ISO up and the noise increases. At 400 ISO the full image looks okay on my 12″ laptop screen but zoom in..

Video is quite grainy but not as prone to shearing as others. The sound quality is quite good for the the in-built mics. But this is way below the standard your smartphone can do in 2020 (please don’t tell me you think your Sony K800i is worse)

I bought this at the end of last year. For a camera just a decade ago with a guide price of £179GBP, it cost me less than a fiver before postage. It came in immaculate condition with all accessories in original box,

This is decidedly average stuff. For next to nothing I’ve got a camera I could easily use for snap shots and web images.. It looks nice too with that early IXUS brushed metal shame there no grip though.

You get a couple of extra features as this is a notch above entry. Some of those a re pointless like the 1600 ISO setting and the Image stabilsiation which is iffy.

It stumbles with picture noise and artefacts. Video isn’t great. But Images looks better than cameras from a few years before but that’s as much due to the upped resolution. It is better than the 2003 Canon Power Shot A30 but not as much as you’d think and I’d be keen to know how this would fair against the likes of 7.1MP PowerShot A560 which was priced in the same market at launch and can be picked up for the same cost now

The manual can be found on Samsung’s L830 support page. Cnet and Trusted Reviews both reviewed it at the time and pretty much said the same as me.

2 thoughts on “Stuck In The Middle -Samsung L830 Review”