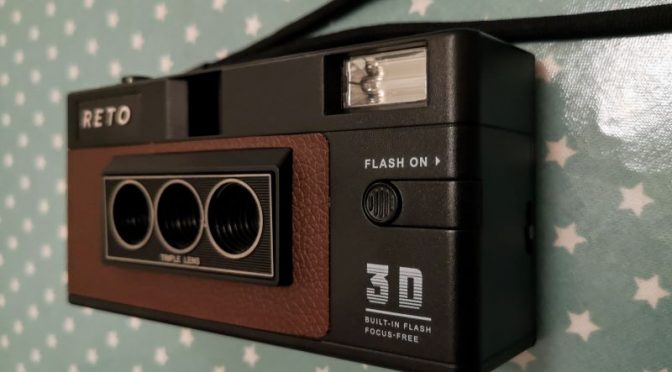 This week has been like Christmas for a film shooter & Kickstarter addict like myself. Just before the weekend the Yashica MF-1 arrived and on Monday the postie left 2 new packages for me. First up the RETO3D 3D film cameras, a 21st Century take on the Nimslo. The second box was a slightly late Ars Imago Lab Box.

I’ll focus on the RETO3D in this post but to begin quick word on the Lab Box by Ars-Imagpo.

I’m late to the party here as I had to prompt them to send my one. There’s already a few reviews of it including this one on JCH. I’m not planning to give it a go for a wee while as well. In essence it’s a home development tank that is designed to be both easy to use and modular so you can easily switch from 35mm to 120.

It’s neatly packaged and mines came with both film modules, a caffenol kit, some goodies and 6 films. These were 120 & 35mm 320ISO Imago B&W film. That looks suspiciously like it was made by Fomapan (like most boutique B&W). The whole lot cost me EU€135, which is pretty sweet as I’d have paid about €40-50 for the film. And €135 is current retail of a lab box with one module. So that’s pretty good.

RETO3D – Back to the Retro

More interesting is the RETO3D camera. This is a simple 3D Camera using 35mm film. It has 3 lens that each simultaneously capture a half frame image. The 3D effect is based on the stereoscopic principle.

This relies on using 2 or more off set images. Orginally you would view these images with a device showing slightly different images to each eye. This fools your brain into giving an illusion of depth of field.

This technique has been around since since the 1830’s. Most Stereoscopic cameras use 2 lens. That was until the 1980’s….

Rather than viewing the image in a viewer, the Nimslo linked to a specialist multi-layer lenticular print technique. Now you’ve probably seen lenticular images on kids cards, books or toys. They either give an illusion of 3d or move as you tilt. Nimslo developed a printer that could print these images from the film.

The Nimslo was initially a massive success and was the best selling camera of 1982 in the US. But the worker of Timex in Dundee Scotland whom were making the cameras went on strike and orders got delayed. Despite moving production to Japan, the company never recovered and was bought out Nishika. They would run on with the format but ran into bad press due to film issues and bad marketing. The format limped on for a while but the market had moved on.

However there has been quite an enthusiast following and Nimslo camera trade hands for triple figure sums. And more traditional Stereoscopic cameras continued to sold. Both in a burgeoning digital 3D market consumers but also for the analogue lo-fi crowd. Holga made both the 135 TIM (35mm) and 120 3D

A new technique using computer software rose that allowed an alternative way of creating a 3D effect from these camera images. This is nnow as Wiggle 3D or Wiggle Stereoscopy

The above images are by Jamie Martinez perhaps the most celebrated photographer using the technique.

What you essentially do is take you set of stereoscopic images and using a photo editor turn the series of frames into repeating animation (often as .gif). The movement of the image (wiggle) gives rise to the 3D effect.

It is quite easy to do and here’s my naff attempt using images form a Holag 135 TIM and the rather excellent StereoPhoto Maker.

It kinda works but with only 2 frames things are pretty poor.

RETO offers an extra lens and that can make all the difference and the camera has certain retro charm looking very like the Nimslo. However unlike the original Nimslo, it is more lo-fi.

The three 30mm lenses are photographic grade acrylic. As well as being fixed focus have a fixed f/10 aperture and shutter of 1/125. There is no metering or Lo-light warning. You’ll need to judge yourself when to flip on the flash.

The camera is described as having an acceptable range of focus from 1m to infinity. Weirdly they describe the flash range in feet. So you have 3-9ft for 100ISO & 3-14ft for 400ISO

A lot of plastic here but it is well built plastic and feels solid and well made. This knocks the Lomography Diana Instant Square off its perch as the sturdiest in production toy camera I’ve used. Well finished and does what it says on the tin.

The styling is very retro and comparisons with the Nimslo and Nishika are obvious. At launch there was a choice between the black body or the leather inlay version you see here

The camera was incredibly well boxed. This is clearly ready for retail. It comes with a nice cord strap and a few stickers. My Kickstarter option included film an a limited edition tote bag.

So they make it easy to make a 3D image ?

Hmm…. that was a selling point. So they touted a animated gif making app. When I signed up I owned a iPhone and it was clear they were making a iOS version of the app. I didn’t really need nor bother to check if an android version was available. My iPhone went to pastures new a few months back and I know have an android phone.

So they’ve a android app ? ermm no

Okay they’ll be making one ? That’s not very clear

So I’ll need to work out an alternative solution (luckily there are and most likely it photoshop layers for me). But it’s a weird decision to not even really try

The Reto Project website has the classic camera on pre-order for $99USD at the moment. I paid HK$780 (about £75GBP at the time) for the limited edition and 2 films (kodak Ultramax) as well as the bag so I clearly got a backer saving.

It is a more expensive Plastic cam but similar price to the likes of the Diana Instant Square and I don’t think it’s that badly priced. A working Nimslo will set you back more than twice what I paid. Nishikas seem to go or even more. That be said they are more advanced cameras with better optics and exposure control.

I’m pretty excited by this camera and I’m impressed by the build quality. The sample images on the Kickstarter page and the company’s instagram look good too but we’ll see once I’ve a film or 2 through it. I’m a bit peeved about the lack of an android app mind but I can work round.