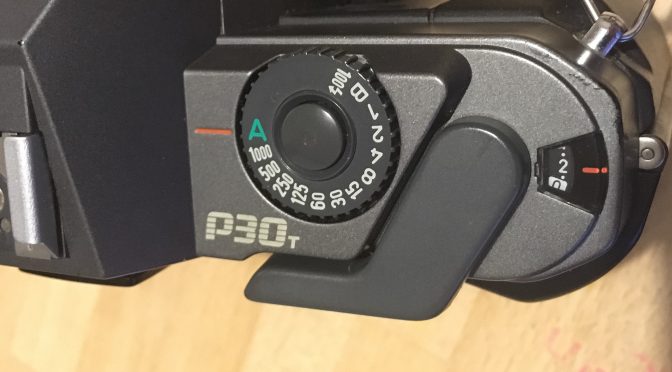 The Pentax P30 series (P3 in the US) is often not at the top of the SLR shopper’s list. But these models are actually quite capable, abet slightly flawed, and are a cheap way into the fantastic K mount series.

That latter point is key. I’ve said before the optic quality for a SLR body is meaningless – that all depends on the glass you fix on the front. And boy do you get a huge choice here – Pentax are the true masters of backward compatibility with the K mount. You can use one of the earliest K mount lenses that came with the first K cameras  in 1975 on a current Pentax DSLR and shoot it in at least non metered manual mode (in most cases you can use Aperture priority mode and if available stop down manual mode metering). The new shiny lens on the DSLR can be mounted one of the manual 1975 bodies but you’ll be stuck at f/22 due to the lack of a manual aperture ring and  possibly with a cropped image (dependant sensor size). Almost all Pentax cameras offer some degree of compatibility with old and newer K mount lenses (there are some exception however check the mosphotos.com Pentax compatibility guide – some of the MZ/ZX  series for example are not so great)

Our P30 series sits in the Goldilocks zone for lens compatibility. Not only will it work with almost ever manual K mount lens with metering but it’ll do the same with AF K mount lenses (you’ll need to focus mind and you’ll still get the cropped frame issue on some  digital lenses). You can even use M42 screw lenses with an adaptor and there was a range of other K mount lens makers like Ricoh (note some Ricoh MF lenses are known to get stuck on Pentax AF/digital bodies due to a small extra pin)

The original P30 lauched in 1985 is a small K mount manual focus SLR body. It offered shooting in a full automatic programmed exposure mode but for the more tricky shots you could move to full manual (there also was the option for Bulb and dedicated TTL flash). The later P30N and the P30T importantly add an Aperture Priority mode (AP) and a cable point. The P30T featured here was the last in the series and only really differs from the N by having a diagonal rather than horizontal split focus circle and a plastic film door.

Plastic is a common theme here as much of the camera was made mainly in It. It still feels fairly solid and the grip on the right side  works well.  You get an electronic timer, cable point, film window on rear and exposure lock button but even better there is a Depth of field preview button. Oddly there’s no EV compensation dial which given this a DX coding film speed setting camera is a major oversight IMHO. Film is manually wound on but features an easy load system (there’s no option here for an autowinder – the closely related P50 (P5 in US) does have the option). Nor can you change the focusing screen or lock the mirror.

So how does it shoot. Remember in terms of the final image the camera body adds nothing optically. It is all about exposure and ease of use. The camera has an on off switch but metering doesn’t start til you touch the shutter (it remains on even after you take your finger off. The viewfinder is a joy to use fairly bright and big and uncluttered with only shutter speeds LEDs lightning up on left margin. In program mode a P appears at the top and the selected speed. In AP and manual the current speed and target speed are shown. There is a central focusing microprism ring around the split screen focusing aid.

The camera uses centre weighted TTL metering. Whilst this was becoming outdated with matrix metering systems appearing with AF cameras, it is still pretty good and I found the camera was pretty good even in complex light situation. The program mode is pretty basic when you look at the charts in the manual reminiscent of the auto exposure seen in 70’s compacts. It doesn’t have as wide a shutter range as my Nikkormat EL a camera over a decade older but then again you’re unlikely to miss a 2 or 4 sec setting. However the lack of EV compensation is a noticeable irritant forcing you to calculate in manual mode. Shutter isn’t quiet but isn’t the loudest.

Flash has impressive support. With the correct dedicated unit you can shoot in Program auto, AP or even for slow sync. The camera can support non dedicated units using 100/ setting but you’ll need to make sure your unit won’t fry the camera.

This is often maligned as a low-end plastic number which wasn’t even made in Japan (try finding a camera these days that is) but it is well made and has mind-boggling lens support.  The big issue is the lack of EV compensation. If you can live without that and want or have K mount lenses then this is steal. I’d buy the P30N or T to get the AP option and cable point. The related P50/P5 addresses the EV compensation issue but you’ll have to live with LCD screen instead of shutter speed dial.