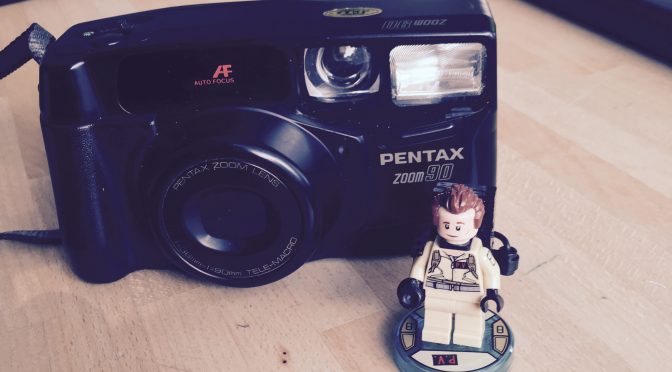 Pentax arguably gave the world the first AF Zoom compact with their IQZoom series. But how do cameras like the Zoom 90 bear up in the 21st century and even against their own 90’s successors the Espio  series  ?

Although lacking the IQ moniker in many markets the 90 is the last in the iconic IQ original series and in some ways already showing signs of transition to the later Espio (still IQzoom in US) class in functionality. In some ways can be seen as a Espio wrapped up in a bulky 80’s body.  In fact the body is even showing transition to the 90s style. That said it is still a bulky camera with the lens protruding slightly even when shut down.

Its headline feature was a X2.5 zoom. The camera is one of the few to show zoom length on the LCD, a neat feature but probably only truly useful for the obsessive shooter. Controls are a mixed bag. The key quick use features are well positioned with shutter button sitting in front of the on off switch up top. There’s a macro mode button with them and just behind on the back the zoom switch. These are all well sized and give good haptic feedback.

The rest of the controls sit around the LCD on the top rear. I find them a bit too recessed but there is a cancel button. The viewfinder sits off centre to the left of these but fits fairly naturally when holding to the eye if you use your right eye. It’s a bit small but with clear bright line frame and parallax markers and has a big focus spot. The viewfinder zooms in and out as you would expect. The camera is not balanced weight wise and despite the small grip and rear ridging it is hard to hold comfortably with one hand due to the weight of the screw access battery compartment end.

Mode wise there is an incredible range for a camera of its age. So you get via the Mode button auto flash (default), flash on, flash off,  exposure compensation (+1.5EV), bulb and bulb with flash. The drive button switches between normal, consecutive shots, various timer modes (inc adjustable interval timing) and a multiple exposure mode. You can combine most of the mode and drive options too. The camera has a slot for Pentax’s wired remote cable (cable switch F) which makes the B modes more sensible. Although an irritating proprietary cable, it is still widely available often for under a tenner as was used on the MZ and SF series cameras  and at least is battery free. A databack version was available ( a more advanced model water-resistant model was sold as Zoom 90-WR and a later Espio model with a Olympus XA sliding closure called the IQzoom 90MC was also sold).

In use camera weight issues aside the 90 actually feels pretty quick. The zoom is pretty speedy compared to the likes of the Canon Sure shot megazoom 105 and sensor locking is pretty good. 2 LED’s indicate focus lock and flash ready status. You can lock focus with a half depress. Pentax recommends engaging the exposure compensation for scenery shots which makes some sense. In default the camera will focus down to 1m. Activating Macro fixes the lens at 90mm but allows shots from 0.6-1m and unlike some cameras still allows for all other program mode choices and the camera can be pretty sharp here in good light and with fast film  although centring shots was a bit iffy. With slower film and lower light the Canon megazoom wiped the floor as the zoom 90 got decidedly hit and miss (more often miss).

The lens is not bad for the era but lags behind later Espio models. The tele end (90mm) of things is the way to go for close-ups and is pretty good in short to medium distances but feels slightly soft at distances. The wide end of things handles things better at long distances centrally but suffers from softness at the edges and also vignettes slightly in bright light at fast speed. Exposure was generally good and the flash seemed to judge things well.

There’s a lot to like here and in fact this camera offers features you don’t get on some modern digital compacts including a bulb with cable option. The top shutter speed is a minor worry but the uneven weighting is a bigger issue and if you use your left eye perhaps one to avoid.  Optically competent enough although outclassed within a few years by its own successors in the Espio series and some slower rivals of the day.