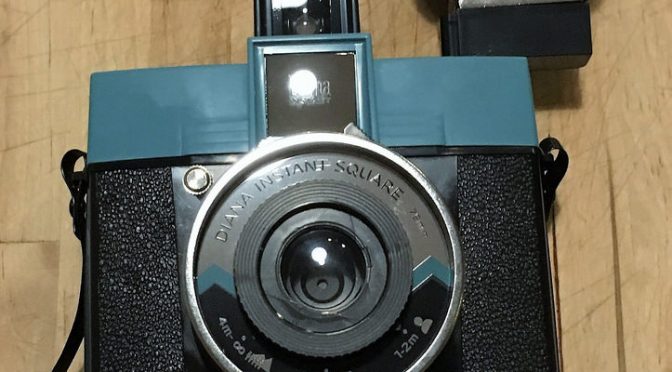 I find myself weirdly reviewing genuinely brand new analogue film camera. It’s also an instant one (a first here !).  Lomography’s latest Diana series camera arrived yesterday. Whilst I haven’t been able to test it fully, I’m starting to get a feel for this Kickstarter shooter. 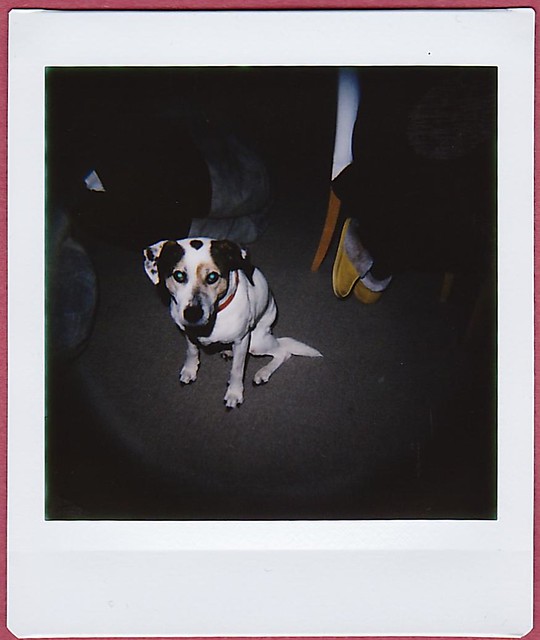 Instax first arrived in 1998. Fujifilm had been involved in instant print photography for some time and their decision in the long run has been highly lucrative for them.  The Instax square format (62x62mm frame size) was launched just last year and is bigger than the original instax mini (46x62mm) format but smaller than the Instax wide (99x62mm) 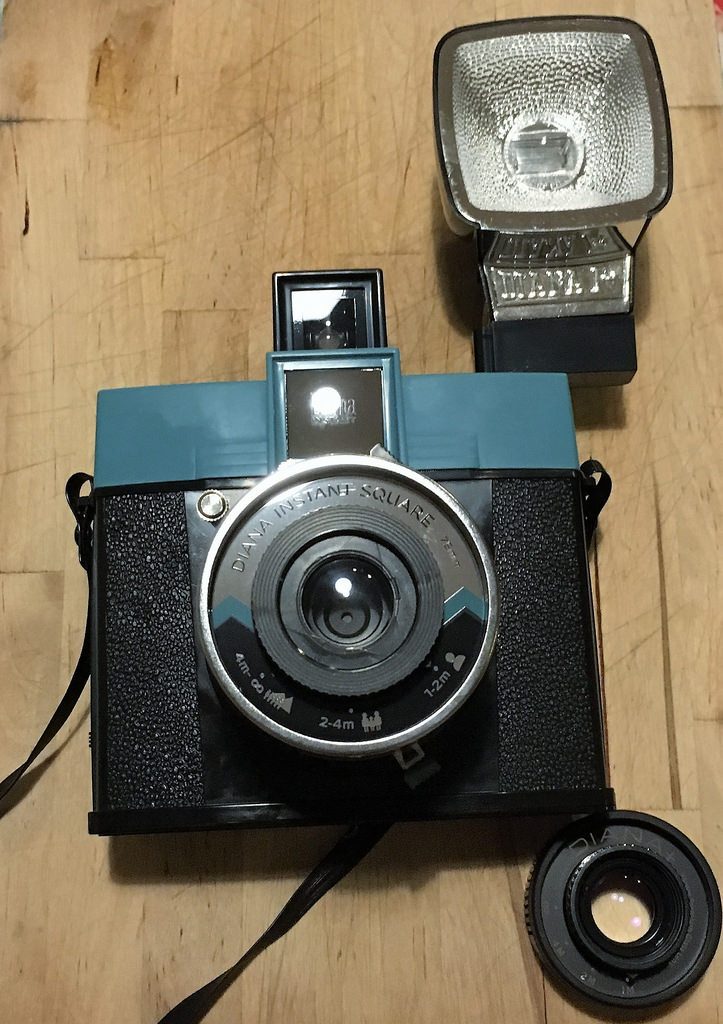 Now Lomography have significant form for instant camera. They’ve various Lomo’Instant instax cameras and various instant backs for cameras from the LC-A to the Diana F+. This is a bit different however. It offers a redesigned Diana style  fully manual camera for the instax square format. It also is the only instax camera that takes external flash units. Launched very successful Kickstarter campaign which I backed. lomography have been using kickstarter to launch their gear for a few years and unlike some they’re pretty accurate on what they deliver and when it will arrive.

Lomography’s Diana F+ camera was a faithful reproduction of the Lo-fi legend of the same name. The original Diana was an all plastic 1960’s Hong Kong made 120 film  camera. A lo-fi affair it may have been but it was successful and  launched a hundred clones.  in 2007 Lomography brought  the Diana back with the Diana+ which evolved into the Diana F+. This is both a serious nod to the past but something more as a system camera with interchangeable lenses, film backs etc. It spawned 2 other film format variants – the 35mm Diana Mini (brilliant but at time frustrating lo-fi shooter) and the Diana Baby 110 (really don’t bother trust me !)

Lomography added an Instax mini back for the Diana F+ although this is hard to find (cynic in me ponders if they pulled production to promote Diana Square). It isn’t cheap if you can find it (listed at £75GBP on lomography’s site just £14 less than the Diana Square).  You also need to factor in the cost of a Diana F+.

I have to say the camera looks pretty nice and fits in with the Diana style. It is however bloody massive compared to the Diana F+ and much heavier. Probably as it needs motorised parts.  Mechanics mean the traditional Diana viewfinder wouldn’t fit in. So it is now a clip on one above the top plate. The coldshoe like clip on point  for the viewfinder suggests there may be future accessories. Lomography have mirrored the faux viewfinder for  use for selfies. It actually works quite well. 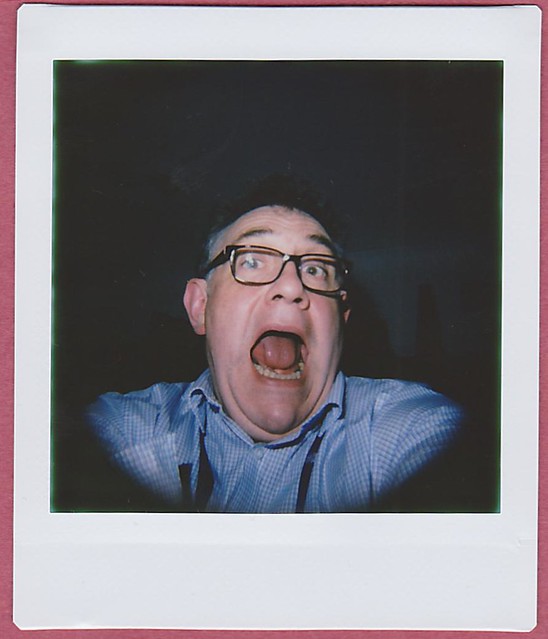 To accommodate the inner gubbings the lens barrel is on steroids although you can mount any Diana F+ lens. I initially missed the lens cap in the box but found  a spare clip on 62mm fitted fine provided the lens focus is turned so doesn’t project out. The camera needs batteries to work (4xAA) and they fit too snug IMHO. I haven’t tried to remove them yet but this may involve some gentle tapping/screwdrivers.

In general use the only difference is you need to turn it on. A small switch on the side allows for this and also sets for multiple exposure if needed.

Beyond that the controls mirror the Diana F+. The 75mm standard lens is a simple plastic number. Lomography don’t list the elements involved but likely between 1 & 3. A small inner ring allows focus  in 3 zones (1-2m 2-4m & 4+).  The bigger lens supports screw in 30.5mm (0.75mm thread) into that smaller ring. These are the same size as the Lomo’instant square.

Lomography say this camera will accept all Diana F+ lenses bar the Splitzer lens. i can confirm that the Glass 75mm fits and is useable.

Flash can be mounted via adaptors for the Diana F+ Flash or  any hotshoe flash. This makes it unique amongst instax cameras by allowing for external flash

You cannot change the back to use other film

So I got the camera from the post office on Wednesday. If the Camera  had come on Monday we had some unseasonably good weather for Scotland in Winter. By Wednesday the rain was back and yet another winter storm was on the forecast. Given Dumfries sits just North of the 55ºN and it’s 2 weeks to the shortest day, I was lucky to get this camera out. Hence I confess – I can’t say it’s had an adequate test but there are some points

The camera worked as I expected. My first roll was mainly indoor shots on flash which took a bit of working out as you can see. I tried a couple of outdoor shots in the rain but to be fair there really wasn’t enough light to make a fair comment. 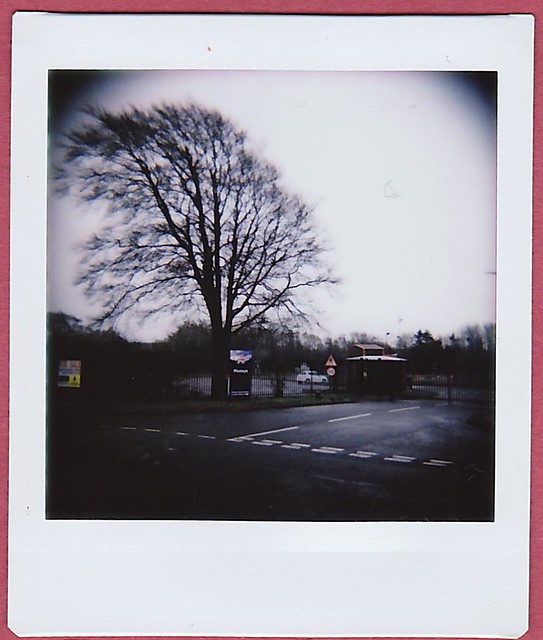 The camera vignettes notably even if wide open at f/11. There is only marginal difference in that to f/32. Focus seems sharpest at centre and fades off at all apertures. Also it seems better the tighter you go although even centrally things are soft. Very similar to the Diana F+ in that regard except for much more vignetting

It does seem better closer than distant but my outdoor shooting was when the lens was wide. Long shots were pretty soft at f/11 but I need to test this camera on a sunny day.

I need to test this more.

If you want an easy to use instax that takes good shots without fuss look away. This is the Lomographer’s instax – you need to set things yourself and I’m guessing you’ll waste a pack or 2 of instax getting a feel. The lens is poor clinically as you’d expect (although you can swap in the 75mm glass lens) but that adds to lomography appeal. it’s the only instax that mounts external flash you want – just be prepared to waste shots getting the flash settings right.

As a niche instax camera , it only has one real rival. That is of course the Diana F+ with instant back. lomography have cleverly priced this to just £14 (£99GBP) more than the Instant back and you do get bigger images

A better review will come soon !

2 thoughts on “Is it Hip to be Square ? – Lomography Instant Square – first thoughts”