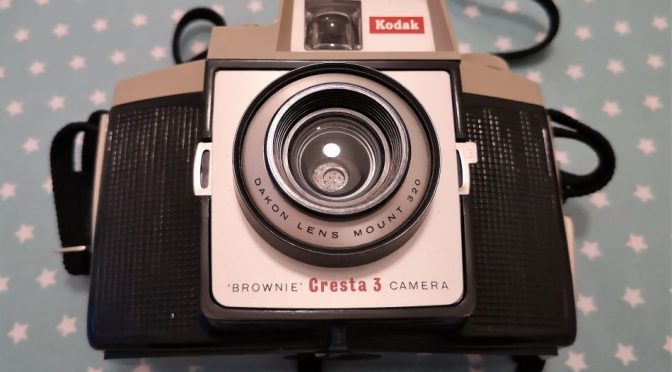 Weirdly this camera sums up a lot of the UK’s current political & economic situation. A rehashed plastic version of a 1950’s British number pushed out by a global corporation that misses the zeitgeist and lags behind it’s European counterparts. But hey it’s British made and we might be able to sell it to the Yanks.,,,

The Kodak Brownie series is one of the best known in the film world and was one of the contributing factors behind us plebs getting a taste for photography. Oddly though only a few are usable today without tweaking. This is due to Kodak’s tendency to vary roll film formats in the early days and predilection for 127 film later on. This pretty much means you’re stuck with the variants of the Brownie No. 2 (120) or the later 110 Brownies. The only other exceptions are the British made Brownie Cresta series of 120 cameras.

These would seem to stylistically straddle 2 better known but 127 film Brownies. The first being best known as the Brownie 127 . It was sold in the UK as the Brownie Starlet (confusing as there was a US model that shared the same name). The second is the Brownie 44A.

Cresta of A Wave ?

How widely seen the Crestas are seen outside the UK, I can’t tell you. But as a quick & dirty measure I search for them on ebay.co.uk and ebay.com. On the UK version there were 61 listings. On the international US facing site I got just 3 cameras (2 sold as incomplete in the US and 1 working from Lithuania)

The series covers 3 cameras (Cresta, Cresta II and Cresta 3). All are simple plastic bodied and have fixed focus lens which has an close up that can be slid into play. They also all share a fixed 1/40 shutter and a 2 1/4″ x 2 1/4″ frame size (yup irritating imperial measure time). That frame size is good for 12 shots a roll and is nearly 6×6. None has exposure lock so double exposure is easy whether you intend or not

The first model also had a yellow filter for B&W and a PC sync flash socket. It’s glass Kodet lens with a f/14. The Cresta II widened that to f/11 used a screw and pin flash connectors. Our Cresta is a rehash from 1960-1965. It replaces the glass lens for an acrylic Dakon one and also loses the yellow filter !

Except mines isn’t. The wider aperture is marked 13 and the narrower is 14. I suspect this may have bee an error or variant.

There is a ridge oddly under lens allowing the camera to be sat down without risk of toppling . Without timer or cable this seems pointless. There is no tripod mount.

It’s a solidly built beast from thick plastic although the shutter and aperture framework is made from sheet metal. The camera has a curved film plane making this perhaps not the best to mod to 35mm. The winder has a metal sprocket so not likely to snap off and the camera has plastic pressure plates over both rolls. This was the first camera I’ve shot in a while that I’ve not had problems with Lomography 120 films.

When open, you lift the top plate and film mount out of the main body. You open by means of a Diana-like lock plate on the base.

Unlock the base and load as normal. There is the usual red window on rear and i got no leaks from it. Just remember there is no lock to stop you double exposing

You have 3 options for shooting controlled by a sliding strip. 1 setting moves in the close up lens (moves the focal range in to 1.2-2m (4-7ft). The close up lens is tied to the wider (f/11) aperture and the default position for the slider is a for f/11 with no close up lens. Move the strip the other way and the narrower f/16 aperture moves into play. The EV values confuse thing IMHO especially as mines are untypical

The camera was intended for 25 or 50 iso film. But modern 100 ISO negative film will work well enough with exposure latitude.

The plastic lens is pretty awful combined with a slow shutter on a medium format. I got quite a few shots that were just blurry due to the slow and downward pressure shutter. Focus on ones where shake doesn’t come into play is tolerable centrally best at about 4-7m. The close up lens works okay for very near stuff but it ain’t sharp. Off center things drop off.

Having the narrower aperture helps a bit but you still get chromatic aberrations galore and there’s quite a bit of pincushion distortion.

You’ll need to work on the shots in post. You do get every so often flashes of Lo-Fi lovelyness than any lomographer would be happy with. But if that’s your game buy a original Diana, Diana F+ or Holga 120. Or even better still go for a Agfa Isoly. They all offer more control and are better lensed. Shame as it’s a nice looking period camera. But so is the Agfa Click and it takes alright photos.

To be honest I think my Brownie No. 2 takes better shots and that model is based on a design half a century earlier.

If they’d kept the glass lens or speed up the shutter there could have been potential. But you’re left with a camera that takes worse pictures than a No. 2 and one that has a flash mount that needs tweaking. Shame as it appears to be the only Cresta offering varying aperture. So Worse than a Holga on so many levels and not in a good way.

That’s got me thinking about the glass ones though….

As ever Chuck Brown’s excellent The Brownie Camera Page is a good start point for these. Meanwhile Remy Steller has arguably the biggest amount of online manuals and notes relating to the Brownie series and he has a new site at Browniecam.com. John Margett’s has reviewed the Cresta I, as has Saturated Imagery.