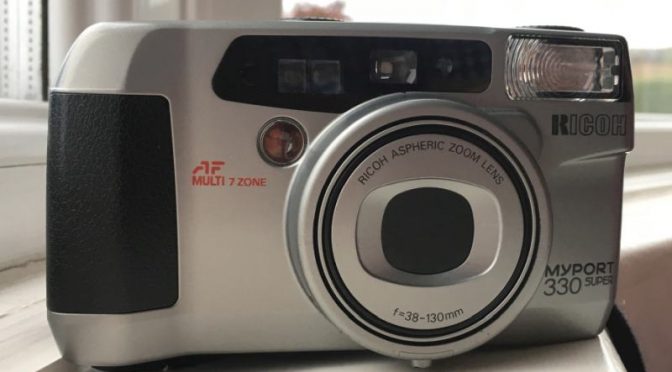 This was a chance finding on eBay earlier this year and on paper what’s not to like. Also known as the RZ-3000, the Shotmaster 130Z, or the Q-130Z, this is a Ricoh compact but in zoom format.   it’s as cheap as chips and feature laden including Passive AF.  But did it live up to the promise of being a bargain for those of us who can’t afford a GR1 ?  Sadly on the 2 rolls I shot, it’s a bit of a Jekyll and Hyde number.  And that’s not just down to the optics.

It’s a mid 90’s zoom compact and goes for the slightly protuding lens barrel look. Sizewise – a bit bulkier than some rivals but still suitable to be slipped in a pocket. I was drawn to the 2 dials for most modes and settings rather than the push buttons of rivals.  Although you’ll still need to press a button for flash control. Not earth shattering in design but still pleasant enough to look at, made in both the gunmetal/black colours pictured or an all black version. Although it’s a tad heavy, the camera can still be held one handed and has a comfy grip on the right over the slightly over elaborate battery compartment. Ergonomically the shutter button is well placed but my big hands would have preferred a the zoom rocker to either be a toggle button or moved a bit. The viewfinder is a bit cramped

Still this ain’t bad and the camera comes with a databack (one that still is of use). The specs also appeal

Overall this not an untypical spec (slower top shutter speed but bigger zoom than some rivals) for 1995. But one feature stands out – passive multipoint AF. The bulk of compacts uses active AF – commonly they fire a beam of IR light and time how long it bounces back. Passive AF relies on the camera analysing the subject and is more commonly found on AF SLRs or high end cameras. This does rather suggests it shares some parts with the Ricoh R series and the more Legenday GR elite compacts cameras.

It is a little heavier and bulky than rival compacts of the era. I’m not just focusing on things like the Ultra compact mju series zooms. My much used 1992 Pentax Espio AF Zoom is much more compact . That said this isn’t unwieldy .

You turn on the camera using the right dial (this also allows you to set the self timer, set to use with optional IR remote and put into continuous mode. The camera has a neat little ridge under the lens barrel to increase stability if you’re using with timer or remote.

Turning on triggers a led to light up under the program setting on the left dial briefly (changing this dial setting also neatly lights up the LED. The program dial gives the option of A (auto), portrait, sports, infinity and Super night mode. You can also turn to spot AF mode – intended for pre-focusing.

The  databack is dependant on the main camera batteries so if you have to switch you’ll need to reset. You’ll find its controls on the rear but settings are shown in the top LED panel along with film count and the flash mode.  The year count goes from 00-99 meaning it’ll outlast the camera. it requires a small pointer like  a blunt pencil tip to press for the settings.

Focus is pretty quick in general use and the lens zooms reasonably fast although not the quietest. The motor drive is quieter than some.

In most circumstances all goes well, but I tried shooting on the busy guid Nychburris parade in Dummies. The camera struggle to lock and as we’ll see in the results I think I know why.

There is no option to adjust film speed nor do you have any EV compensation control or even a backlight mode. The camera in auto does deploy automatically a fill in flash for that purpose but more control would have been nice. The fill in flash may have caused some of the issues.

My first roll in was a slightly expired roll of my favourite Kodak BW400CN. This started out pretty well on walk through Dumfries on a sunny day Both wide and tele shots seemed broadly on the mark both exposure wise and focus to start with and this certainly was not bad. There’s a whisker of barrel distortion at tele length and at wide there a minuscule of pincushion. This was not looking that bad for a compact zoom. But then I popped in a roll of colour film for the parade.

The parade shots tended to come out under exposed  on the tele end of zoom. I suspect the camera was trying to fire off the flash (it wasn’t raining but it was dull day) and may have rather pointlessly given the max range is about 3.2metres (100ISO). I think if i’d have shot in sports things would have been better.

Broadly the camera is not bad in terms of focus and is more than competent at short to medium range shots. However there does seem to be some issues with long distance shots on the tele end (a common fault in AF compacts). Things are soft in normal mode but using the Infinity mode improves things a tad.

There’s a lot to like here. The twin model dials are a neat feature you don’t really see on compacts. It also offer a reasonably amount of sane modes. The novel passive AF with multizone focus is good but I’m not sure the optics match in enough. That works much better in the Ricoh R and GR series of fixed focal length cameras.

I think I’ll need to try this camera again however and be more aware of the settings.

On the basis of these 2 rolls there are better slightly older cameras. The Pentax Espio series has some seriously good models  such as the 1992 AF Zoom which is smaller and optically better IMHO. It has smaller controls but is a much better package. The Canon Sure Shot Megazoom 105 is worthy of a look too and is an incredibly competent camera especially on close up work where it delivers near SLR quality but just in a bulkier package. The humble yashica microtec zoom 70 which dates from the same time whilst more limited zoom wise and has some optical issues, is all round more reliable.

However I’m gonna need to try this out again and push it using the modes. Will That make a difference ?

Little other than factual info is available on this camera can be found on-line.